Last night after seeing Tribes, we realized that the night was still young (it was only 9:45pm).  So we ran back up to the movie theater at Lincoln Square and caught a screening of Mirror Mirror, the new Snow White movie with Julia Roberts and a handful of other interesting people.  (And yes, if you’re keeping track, this does mean that in less than 36 hours, we had seen two movies, one opera, one play, eaten at three notable restaurants, and toured a cathedral — because that’s how Amanda and I do New York.) 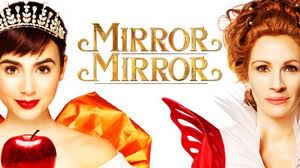 The movie was terrible.  Visually very pretty, but in all other respects one of the stupidest movies I have seen in years.  Almost offensively so.  To the point that if I hadn’t been so tired, I would seriously have contemplated leaving mid-movie (which I’ve only done once in my life).  And because it was so bad, that’s all I’m going to say about it.
Ballet Preljocaj: Blanche Neige
Infinitely more interesting and satisfying on all levels was the performance of Snow White by Ballet Preljocaj at the Kennedy Center (which I saw this afternoon, directly after getting off the train from New York).  This French dance company (which is headed by Angelin Preljocaj) told the classic fairy tale in the form of a full-length narrative ballet but in the vernacular of modern dance — so no pointe, no tutus; instead, we had funky modern movement in aggressive costumes by Jean-Paul Gaultier.
I really enjoyed it.  In particular, some of the highlights:
1.  The piece opened with the good queen (Snow White’s mother) alone on the stage in a long black dress, heels and a crown.  She’s enormously pregnant, and we see her give birth alone and in agony, and then die.  Clearly, this was not going to be a whimsical romp.
2.  When Snow White first meets the prince in the woods, they dance a very romantic pas de deux twice:  The first time, when their eyes first meet, the music stops, and they proceed in complete silence.  Then the music resumes and they repeat it exactly.  It felt to me as though we’d seen, in dance form, the concept of spiritual creation preceeding physical creation:  The dance without music was the spiritual connection between the lovers, and then the music brought them into the world and made it real.  Such an interesting and unexpected effect.

3.  The poison apple scene was completely terrifying.  Rather than allowing Snow White to eat the apple and wait passively for the poison to work, the witch rams it violently down the girl’s throat, tormenting her until she’s dead.  It felt like watching a poisonous snake take down a lovely bird.

4.  When the Prince discovers Snow White’s body, he doesn’t just kiss her — first he melts in grief, and then he takes her lifeless form and dances a tender and lovely pas de deux.  It was surprisingly moving and, although he did eventually kiss her, I had the feeling that it was the dancing that brought her back more than the kiss.  It made me think of Gisele, where the heroine supports the dying prince as he dances under deadly enchantment.

5. Oh, and speaking of dancing to death, guess how they kill the witch! They bring in the fatal red shoes (from that other gruesome fairy tale) and force them onto her feet — she then dances frenziedly until she expires of exhaustion.