February 4, 2013 · by JJD · in Fitness, Food · 1 Comment
I spent more time cooking this weekend than I have in years!  Two reasons for that:  First, having arrived at the end of the second week of this paleo/primal challenge, I was oh so bored of eating the same rotation of grilled meats and fresh vegetables/fruits — I needed a more complicated and satisfying hot meal.  Second, we got bonus points for trying out new-to-us recipes and sharing them with the group.

A couple of friends of mine who have been eating paleo for a while recommended some blogs with paleo recipes and directed me to a few of their favorites.  Sadly, I wasn’t able to find all the ingredients for some of the recipes I was most excited about (and when I say “sadly”, I really mean it — nothing makes you want to cry in the middle of the grocery store quite like not finding that one last ingredient for the dish you’ve been fantasizing about all week), but I still managed to pull off three solid dishes.

I would describe the first two as definite successes; the third as a valiant effort.  I’m looking forward to making these recipes again (with certain refinements that I’ve noted based on this first attempt) and to discovering more!

This recipe comes from Health-Bent, a blog run by two crossfit coaches in South Carolina.  The trick here is to replace the pasta with slices of squash — and it works surprisingly well.  While it lacked the cheesy goodness of ordinary lasagna, it was still delicious.  The key, I think, is to use good sausage and not to skimp on the red peppers; also, keep your squash slices thin.  The recipe is a definite keeper, and I’m curious to play around with variations (maybe add some spinach?). 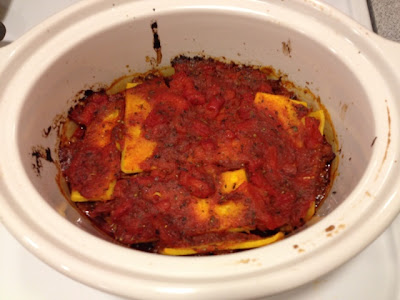 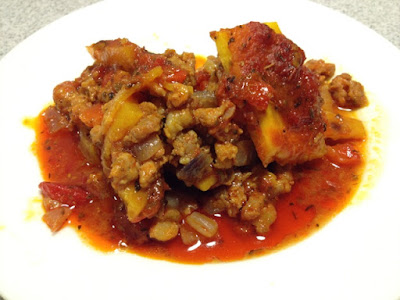 This recipe is the result of a Google search from the middle of the produce section at my grocery store.  In response to my concerns about losing weight (I’m trying not to) my coach suggested that I eat sweet potatoes after my workouts in the morning.  I made a batch this afternoon with the idea of having it on hand through the week.  Of course, it also made a fantastic pre-meal for the Super Bowl party I went to tonight — by filling my tummy ahead of time, I wasn’t tempted to eat the non-paleo treats that were spread ever so enticingly on the counter. 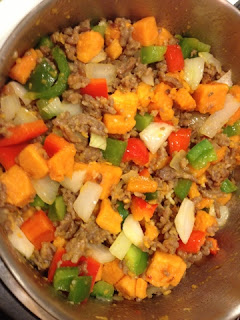 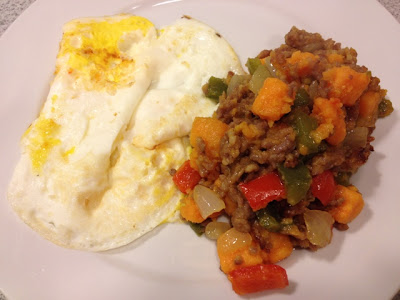 This recipe comes from one of my teammates (who may have gotten it from somewhere else, but she didn’t say), and it’s my first attempt at a paleo dessert.  It consists of apples (green and red) and a pear tossed with cinnamon, vanilla, dried cranberries, almonds, pecans, salt and coconut oil, and baked together in the oven.  The result didn’t wow me, but I see potential:  Essentially, I would cut the salt and increase the dried cranberries, and I would cut the apples/pear smaller and cook them for longer so they were soft like in an apple pie.  I’ve got some apples left over, so I may give that a try later this week. 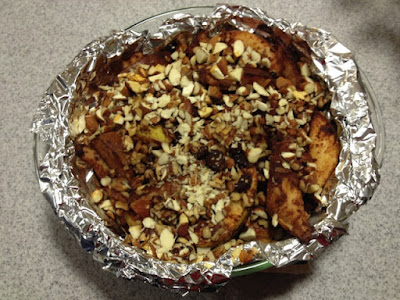 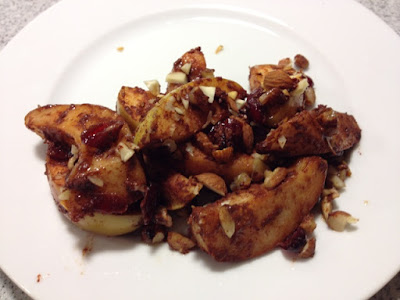 Not everything I ate this weekend was the fruit of my own labor.  On Friday I met up with cousin James again (which feels like an appropriately Downton Abbey-esque thing to call him), this time for dinner at Huong Viet, my favorite Vietnamese restaurant in Arlington.  With all the fantastic noodles and rice and dumplings on the menu, I was tempted to abandon my paleo challenge for the night, but then I discovered a few items that seemed paleo-friendly — and I’m not gonna lie, I did not ask too many questions to make sure!  (Of course, there was no way I was going to try to figure out how to log all that in my food log, so while I got full points for sticking with the diet, I lost one for not keeping track… tant pis!)