October 1, 2012 · by jackjasondavis · in Food, Ordinary Life · 2 Comments
It’s Sunday night and, as I review my weekend activities for blog material, I’m feeling uninspired.  Which is kind of unfortunate, because it was a perfectly good weekend.  The problem is that I’ve been battling a headache all day, and I really just want to go to bed.  I blame it on the surprise pre-General Conference Fast Sunday.
First, though, here’s a synopsis of the latest end-of-September happenings:
On Friday, I joined my friend Jennifer for dinner at RedRocks Pizzeria in Old Town Alexandria before going to an event called As was Written.
The pizza was tasty (though had I read the menu more closely I might have requested a less barbecue-like sauce) and the event was fun.  It was organized by some friends of Jennifer’s and consisted of an ecclectic group of writers, poets, musicians and comedians.  They didn’t hand out any programs (or at least I didn’t get one), so I had no idea who anyone was or what they were going to do, but the website has a handy breakdown of the featured folks.  I thought the poet was fantastic, and the stand-up comedian and the Pakistani author were also strong.  The sketch comedy duo, on the other hand, was terrible (on a level that makes you embarrased for them standing up there).  Individual performances aside, I liked the down-to-earth, normalness of the event.  It wasn’t a fancy, polished venue; nor was it an indie hipster dive — it was just ordinary people showing off the stuff they like to do.  Kind of like a grown-up talent show.
I spent most of the day on Saturday on my bike (another great ride out through Potomac, MD) or running errands in my car.  In the evening I met my friend Tim out in Fairfax, VA, to try out a restaurant that had recently been recommended by a guy I’d met on a recent trips to New York.  It’s called BonChon Chicken and it specializes in fried chicken. 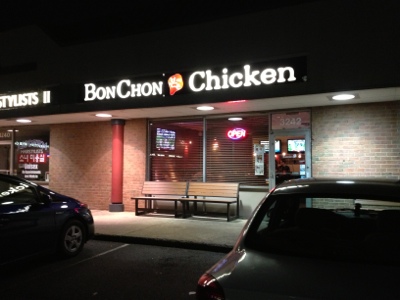 I had no idea that Koreans did fried chicken, but it was delicious — way more delicious than the usual pickled/fermented vegetables that I so often associate with (non-Michelin-starred) Korean food.  The chicken came in two flavors:  one was sweetish, the other really hot and spicy.  Both were great, though after a while I came to appreciate the non-hot version — it’s nice to be able to eat your dinner without gulping for water every thirty seconds.  The most unusual aspect was the ordering process.  Apparently it takes approximately forever to cook the chicken, so we had to call an hour in advance to place our order so that it would be ready within a reasonable amount of time after we arrived.  It worked very smoothly, and we didn’t have to wait too long, but that’s the first time I’ve had to call ahead to place a dine-in order. 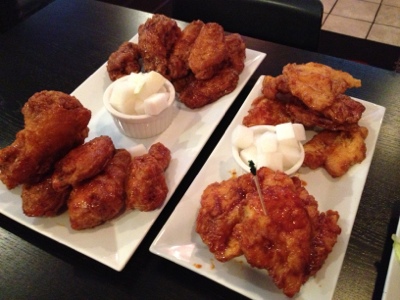 Today was just an ordinary Sunday.  I went to church, got a new calling (Assistant Executive Secretary), did my hometeaching, and spent the rest of the afternoon working, napping and planning the week.  I’m feeling a little trepidatious about what lies ahead:  As ever, there’s a ton going on at work, but I’m also heading into a mini wedding season (where, to be clear, the season is mini, not the weddings).  This Thursday I’m flying to Germany to attend the wedding of two friends, and then next week I’m flying out to Idaho for Mark’s wedding.  I have no idea how I’m going to get everything done, and I’m hoping that a niggling cough will not get worse from the travel (especially given that I’ll be singing in at least one of the weddings).  Still, I’m super excited to see friends and family again, and Berlin in October will be great (even if it’s just for 36 hours).  But first, an early bedtime so that I can start the week fresh and well rested.

← Charicature of myself
Cry Wolf →
Follow A More Gentlemanlike Manner on WordPress.com