July 26, 2012 · by JJD · in Architecture, Flowers/Gardening, Spain, Travel · Leave a comment
The Alhambra is a fortress-palace complex that dates from the 9th century, with the principal buildings and gardens having been built in the 13th and 14th centuries by the Nasrid emirs.  After the Christians conquered the region, the Holy Roman Emperor Charles V (grandson of Ferdinand and Isabella who funded Columbus) added a large Renaissance palace to the site as well.

Amanda and I had read about the Alhambra’s famous beauty and designed the whole post-Morocco portion of our trip around visiting it — hence the importance of our getting from Morocco to Granada as planned.  Fortunately, we did get there as planned (albeit very short on sleep), and we were not disappointed.  The Nasrid palace and gardens, and the gardens of the Generalife, easily count among the most beautiful man-made places I have ever visited.  The sensory pleasure is exquisite:  Graceful buildings are reflected in still pools surrounded by myrtle hedges; sunlight streams through latticed windows into shadowy rooms with roofs like the starry night sky; plaster work of infinite detail praises God and beautifies every wall; fountains and rivulets fill the space with the burbling sound of water; the scent of lavender, thyme and jasmine hangs heavy in the air.

As I think about the Alhambra now, and look back through my pictures, I’m pleased with what I was able to capture with my little camera and untrained photographer’s eye.  But there are still so many wonderful details that I could not capture — so they remain in my memory, and I recommend that anyone with an inclination to travel be sure to add the Alhambra to the itinerary.

The ceiling below was by far the most magnificent.  Arching over the room in which the emir received ambassadors, it is the closest I’ve ever felt to being under the stars while yet indoors.  Really magical.

The ceiling below was equally impressive for its intricate plaster work — all the more so once I realized that it was originally painted in many different, richly hued colors. 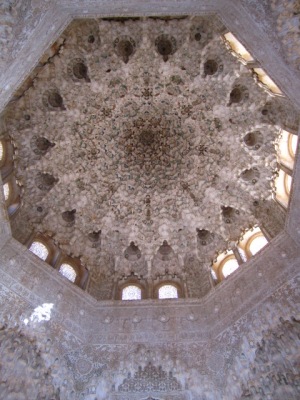 The palace hammam was a small and simple building with lovely star-shaped sunlights piercing the domed roof.  I loved how the stars multiplied as you progressed through the chambers:  First one star, then another, then a whole sky full of stars.  Just as in nature.

Details
You know the English expression, “the devil is in the details”?  Well, in the Alhambra I would say that God is in the details.  The workmanship and beauty that grace the buildings and gardens on a large scale is equally manifest in the most minute elements of decor. 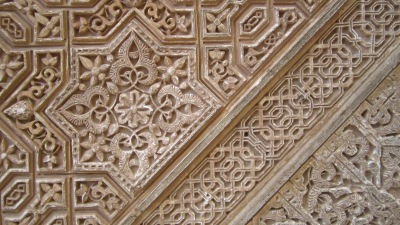 The Gardens
My gardener’s heart was delighted with the lovely gardens that surrounded the palace and filled the courtyards within.  I loved how they brought the beauty of nature inside the buildings — a very different approach to northern palaces (think of Versailles), where the gardens are entirely outside the building and quite a distance away.  This makes me want to move to a climate where planted courtyards would work. 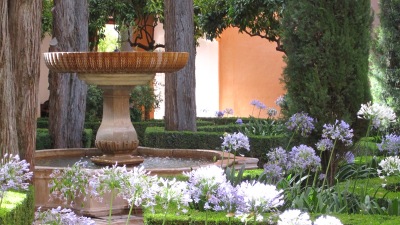 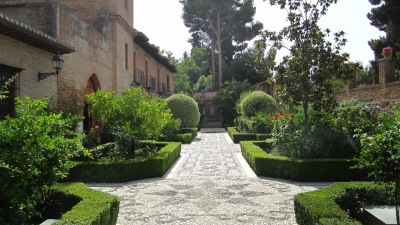 The Views
The Alhambra is situated on a prominence overlooking the city of Granada.  The views from its windows and terraces are expansive and refreshing. 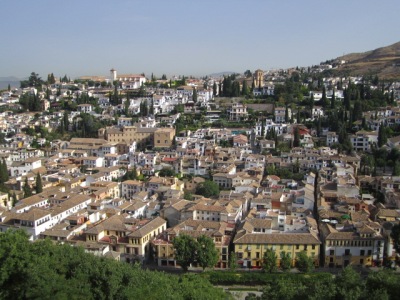 ← Over land and sea — back to Spain!
Granada – Palace of Charles V →
Follow A More Gentlemanlike Manner on WordPress.com