March 24, 2013 · by JJD · in DC · 1 Comment
Last night Amy invited me to an evening of music and conversation.  It was put on by Grinnell College (where Amy did her undergraduate studies) and the format was a mix between concert, lecture and salon (in the 18th Century French sense of a social gathering where smart people sit around and entertain each other by being interesting).

The evening featured a music professor from Grinnell and his take on the Preludes of Claude Debussy (a late 19th/early 20th Century French Impressionist composer).  Rather than just introduce the pieces and then sit down and play them, the professor instead spoke briefly about how Debussy put the titles at the end rather than the beginning.  No one really knows why Debussy did this, and it seems to open up some ambiguity in the relation of the music to the title and what it all supposedly means.  Indeed, by putting his titles at the end of the music, Debussy seems to invite listeners and players to engage with the music first, and then consider whether the title fits (or not).

The professor also went further afield to explain how musicology has evolved over the past 60 years to focus more on what music “has meant” than on what it “means.”  In addition, he pulled from literary theory and presented a sort of taxonomy of different types of ambiguity, which served as a theoretical framework for the evening.

Once we had gotten through the lecture, the concert/salon portion started.  The professor would play a piece without telling us the title, and then the audience (about 30 people; the size of a class) would discuss the piece — what was happening?  what did it mean?  how did it make us feel?  what do we think the title is?  Inevitably, the comments went roughly as follows:

Oh, liberal arts majors!  How I do love you.

Then the professor would tell us the title of the piece and it would be something like, “Sound and Scent Mingling” (which caused general befuddlement) or “Dansers at Delphi” (which made the Greek tragedy guy beam broadly) or “Window to the Plains” (which made everyone nostalgic for Iowa).

Afterwards we gathered in the main foyer for hearty refreshments and social hour.  Turns out Grinnellians are all super friendly and have a great sense of school spirit and camaraderie (one more thing that I never got at the U).  Conversation ran from the music we’d just heard to memories of school to how everyone’s lives have been affected by the sequester (seriously, it’s bad).  One woman I met is a historian with a focus on religious history who works for the National Archives; she told me about a recent visit to Salt Lake and how she thought the Pioneer Museum was astonishing and probably had one of the best (and most understudied) collections of 19th Century textiles anywhere in the world. 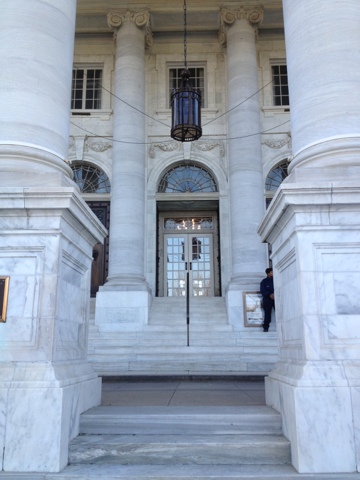 ← A lesson for salesmen
Hard at work (it’s a good thing no one can see what I’m actually typing) →
Follow A More Gentlemanlike Manner on WordPress.com