Boy am I glad we made it to Cuzco today.  Not only is it the jumping-off point for Machu Picchu (which we’ll tackle shortly), it’s also destination-worthy in its own right.

As you can see from the pictures I took from the air, Cuzco is situated high in the Andes (approximately 11,200 ft), in an open bowl of a valley.  Walking out of the airport, I could tell instantly that I would like it.  The sky was as blue as could be and the honey-colored town and hillsides were drenched in bright, warm sunshine.  It must have been in the low 70s, and not a drop of humidity to be felt — just pure, clear air.  It was glorious!  Especially after the fog and smog of Lima.

We had arranged for our hostel to pick us up from the airport, but due to the many schedule changes, we and the ride did not coincide.  So we found a local guy to drive us into town (to our mild chagrin, as he immediately launched into a sales pitch for a competing hotel).  From the street we caught tantalizing glimpses of a city worth seeing. 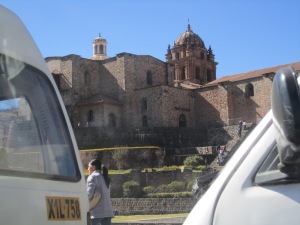 After some initial wrong turns down one-way streets, we ended up at our hostel.  Amanda had found the hostel last minute in some online travel forums and had made the reservation without knowing much more about it.  She was right to do so.  It’s a great little place on a narrow cobblestone street very near the central plaza, with an entrance through a very bright art gallery, and a friendly girl at the reception.  Our room was delightfully clean, with a great view.

After settling into the hostel, we set out with the best intentions of getting something to eat.  It was 3:00pm and for some reason we were starving — despite the fact that we’d each had a piece of bread and fake orange juice for breakfast in Lima, and a granola bar and Ritz crackers for lunch on the plane.  Must have been the altitude…

We were instantly distracted, though, by the central plaza, which is surrounded by churches and other Spanish colonial buildings dating back to the mid-1500s.  Which is amazing, if you think about it:  Here in remotest Peru, the Spaniards were building cathedrals before Jamestown, Virginia (the oldest city in the British colonies) was even a twinkle in some aristocrat’s drunken second son’s eye (according to our license plates, Jamestown was founded in 1609; it was mostly peopled by drunkards and second sons hoping to compensate for their lack of inheritance).  According to our guidebooks (of which we have two), this Plaza de Armas is one of the finest, and most beautiful, in all of South America.  I can believe it.

﻿﻿The buildings surrounding the plaza weren’t the only items of interest.  Apparently the Peruvians had the same great idea as the high schools in the Salt Lake valley:

Seems they also got wind of what the Brazilians were up to in Rio de Janeiro:﻿﻿

I suggested that we hike up there; Amanda said I could run it on my own someday when I needed to “accomplish” something.  So we compromised by getting dinner.  We found the place that the girl at the hostel had recommended (a place called Antojitos, just off the plaza) and ordered a plate of chicharrones.  I’d read that they were tasty — and they were!  It consisted of tender, fried white chicken breast that must have been marinated in garlic before frying.

After dinner, we finished the walking tour, which took us past various other churches, arches, mercados, and a palacio de la justicia.

Interestingly, a lot of these buildings were built right on top of old Inca ruins.  The lower portions of the buildings were made up of massive stones that had been so precisely cut to fit each other that even now, many centuries after their construction, the walls look as if they had been built yesterday.  Note that they didn’t use mortar.

After all that walking — not to mention the flying, the taxiing, the (not) sleeping in hostels, and everything else that we’d been through in the last few days, we were tired and ready for bed.  At 6:30pm.  So we headed back to the hostel, picking up some pastries along the way, so that we could get a good night’s sleep before the next round of adventures tomorrow.