I came over on the Eurostar yesterday for some meetings in our Paris office. Natch all the public transit was on strike so no one came to the office. But I’m not one to complain about a quiet afternoon in the City of Light.

After work my friend and colleague Chloe invited me to join her family for Shabbat. It was actually my first time celebrating Shabbat, and I loved it. Standing with parents and kids around the table, singing in Hebrew, drinking the grape juice and eating the salty challah bread. Just as at the Jewish weddings I’ve attended, this gathering had a festive informality that our Christian reverence seems to preclude in many of our rituals.

Today didn’t quite play out as I had intended. The weather was perfect — sunny and near 80 — and it was the last day of Paris Design Week, so I had planned to spend the day zipping around town to various design exhibitions. But alas, I have a cold. And it’s one that I haven’t been able to mind-over-matter my way out of. So I slept late, ate breakfast, and slept some more.

A little after noon, I tottered down to the train station and headed out to Poissy to see Le Corbusier’s famous Villa Savoye. 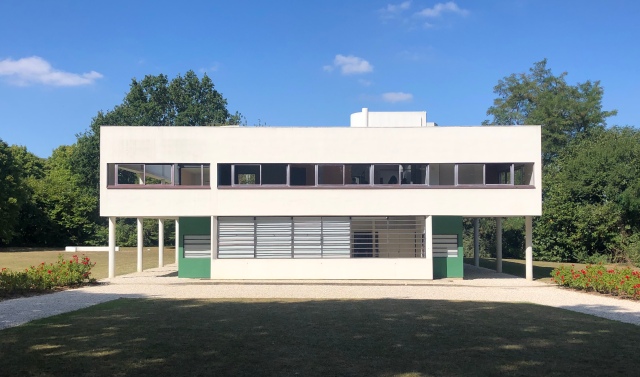 Would you believe this house almost 100 years old? It is not just some modern house. It is the Modern house. As in, the architect who built it in the 1920s was part of the avant garde that invented Modernism. It embodies Le Corbusier’s “Five points of new architecture” that provide the theoretical underpinnings of the modern movement:

4. the facade is free floating and determined by the views intended from the interior rather than structural concerns

5. because the facades are not loadbearing, they can have long horizontal windows that create light and airy interiors. 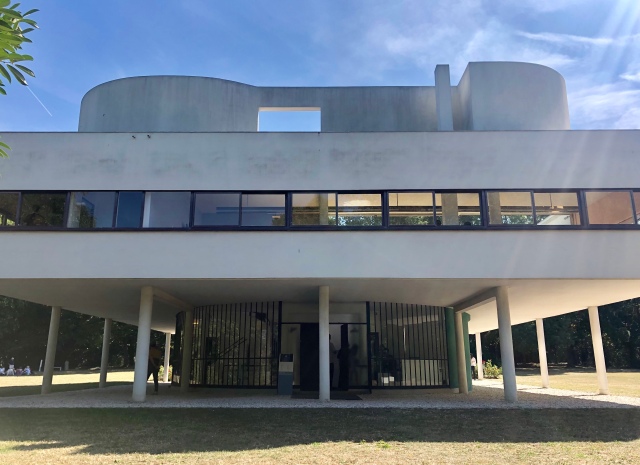 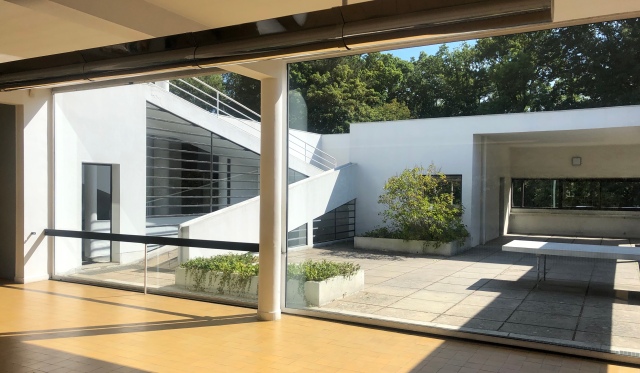 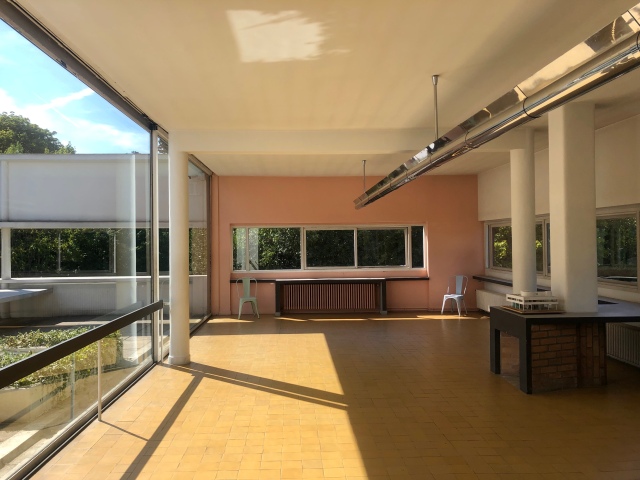 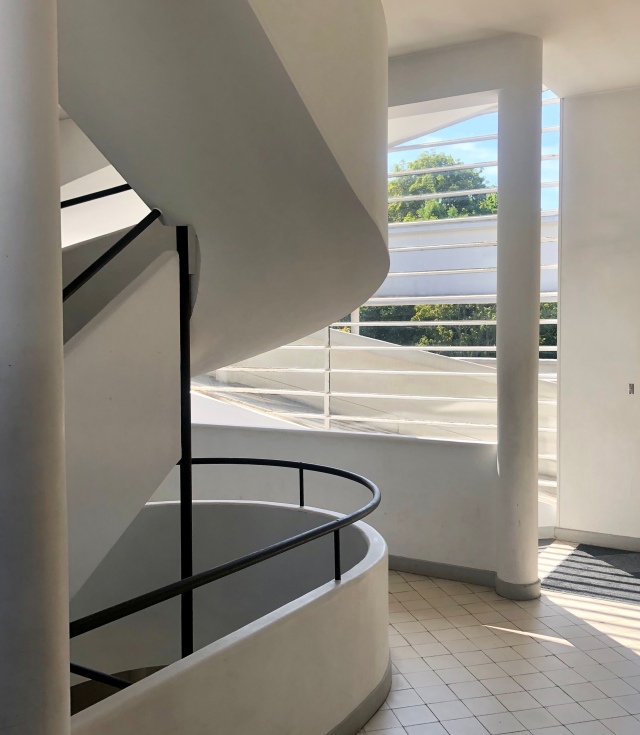 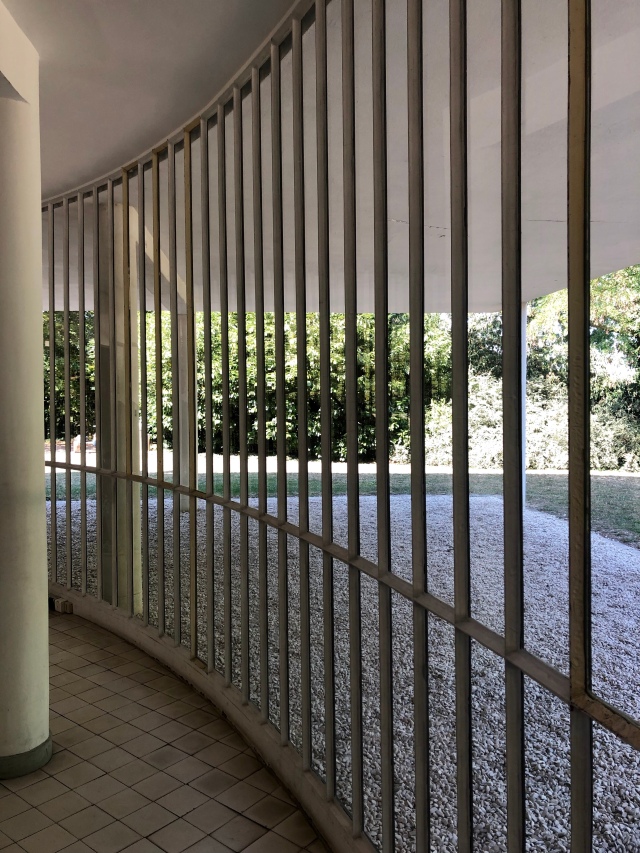 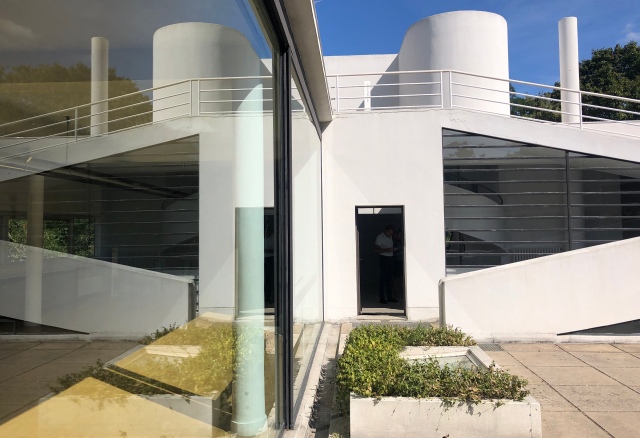 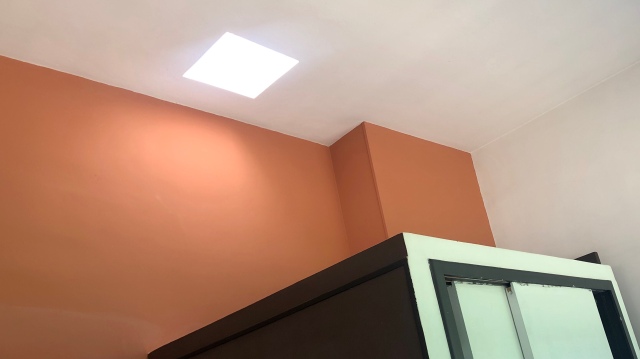 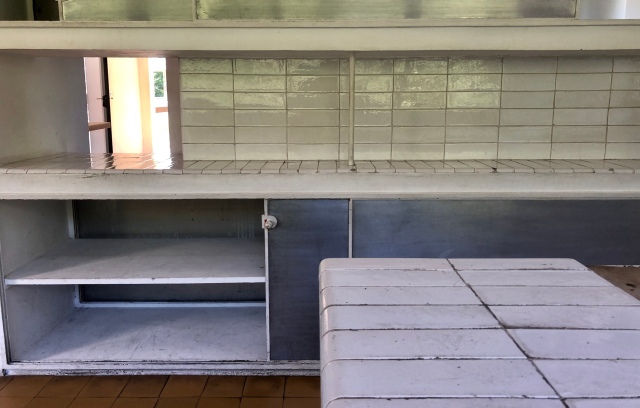 It’s a remarkable building. Seeing it unfurnished it felt very much like a work of art. I’m curious how it would work as an actual dwelling. The openness and lightness if the main rooms and roof terrace were magnificent.

After visiting the house I walked back into the town of Poissy, which had more history than I had realised. The church is nearly a thousand years old and was the site of a bunch of medieval royal events. And it clearly showed the transition from roman to gothic architecture. 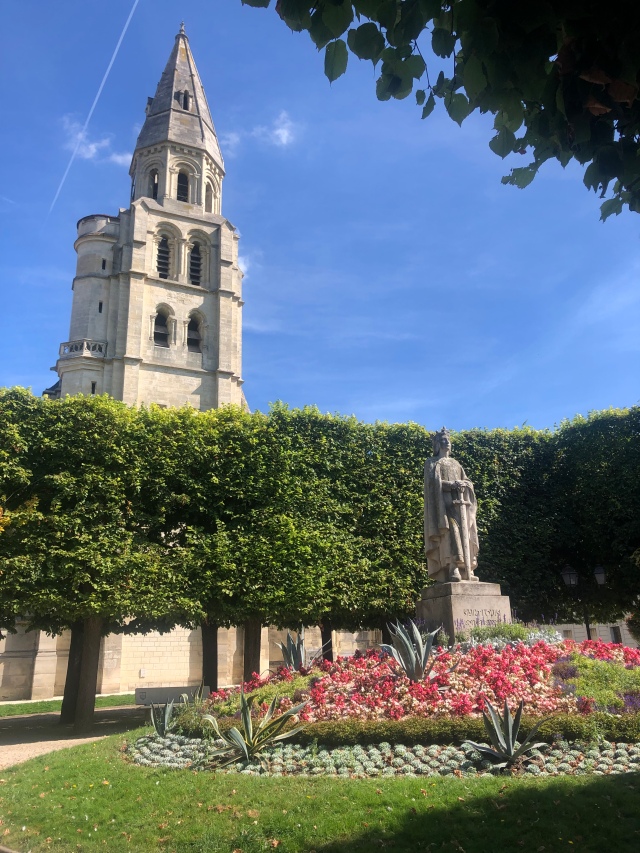 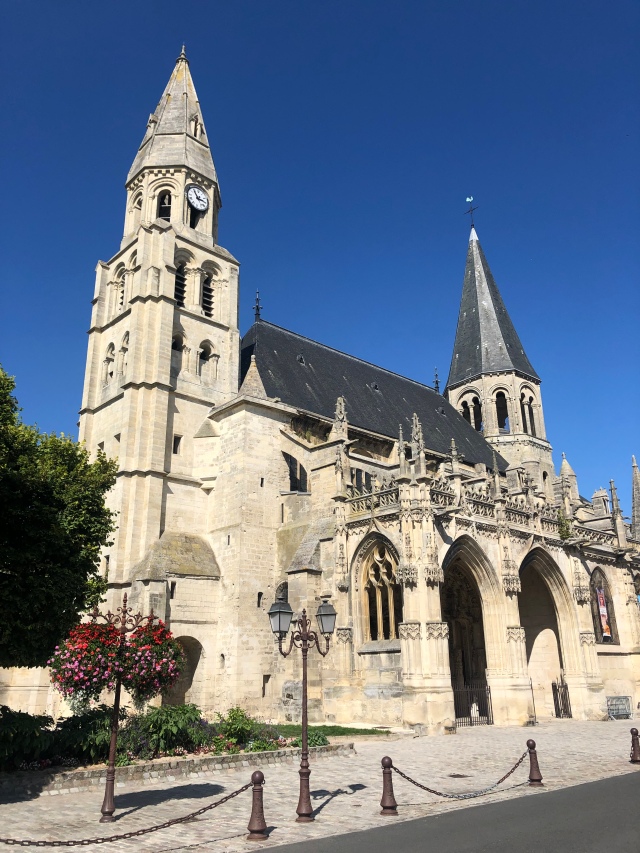 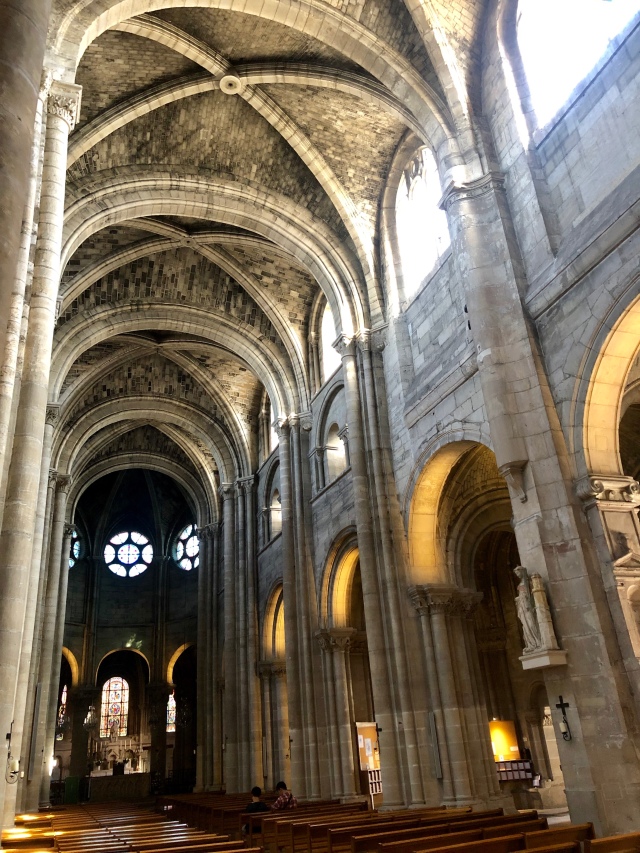 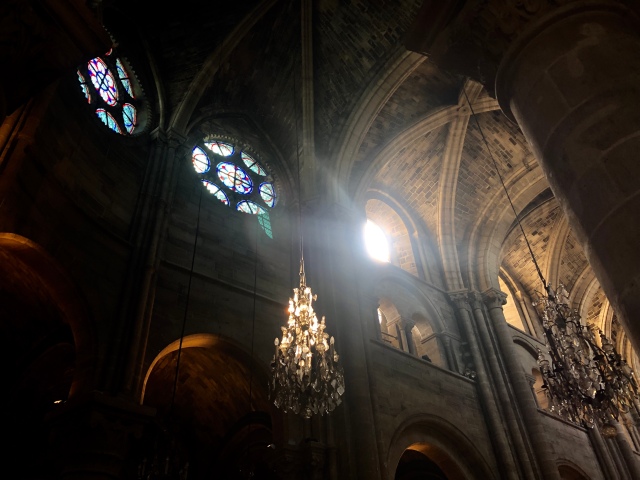 Nearby were the remains of a medieval priory, and the path leading to it was named in honour of the poetess Christine de Pisan, whose daughter had taken orders here. 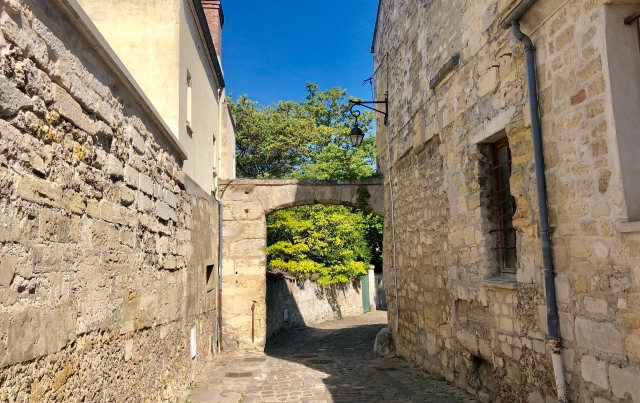 The village center was cute and oddly sleepy on a Saturday afternoon. 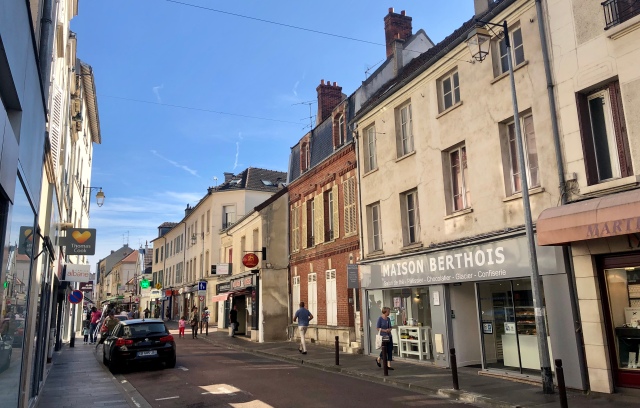 But fortunately one pastry shop was open and serving quiche and apple turnovers. 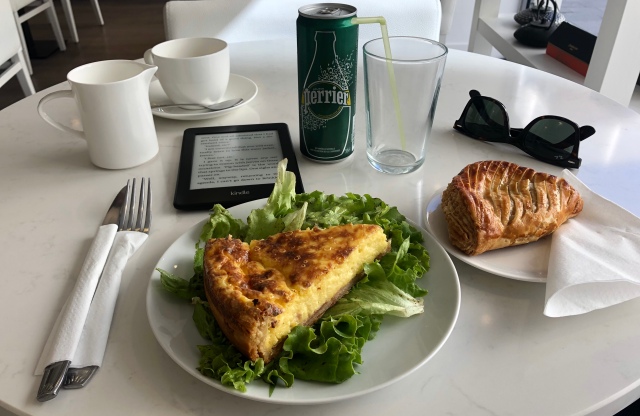 Sadly even those delicacies were not enough to relieve the headachy oppression of Madame Cold, so I made my way back to the hotel downtown for what turned out to be a two hour nap. So much for Design Week!

The nap did help, though, and I went out into the dusk to stroll through the city. I landed at Les Halles, which is a terrific bustling park with an energy that reminds me of Washington Square Park in New York. I found a bench and called Justin and watched the people (and rats!) until my phone died and it was time to go back to bed. 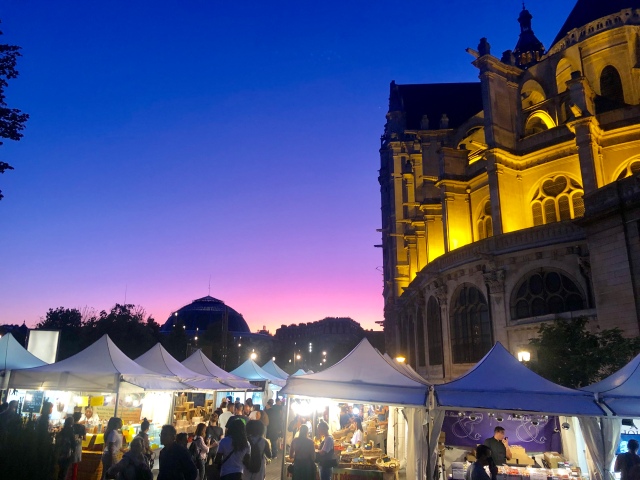 ← Leaving Madrid
Off to Luxembourg →
Follow A More Gentlemanlike Manner on WordPress.com