October 2, 2014 · by JJD · in Chez moi, Flowers, Moving to Seattle · 2 Comments
Finally, at long last, and FOR PETE’S SAKE, I moved into my new place today!  I technically have another month before I need to be out of my old place, and I had hoped to paint and redo some light fixtures (and maybe trim some more moss?) before moving in, but apparently Lesson No. 1 in the New Homeowner’s Manual is called “Resign Yourself to Everything Taking 87 Times Longer than You Think It Should and Just Move In Already.”
The move couldn’t have gone more smoothly.  I had everything packed and ready to go (most of it having never been unpacked from the initial move from DC), and the movers were prompt and quick.   Seattle demographics being what they are, there was no rapping this time; instead, I was entertained to overhear the three three twenty-something white guys wondering aloud how one of their mutual friends could not want to be a P.E. teacher.  They surveyed the pros (“everyone wants to be a P.E. teacher”) and cons (“the higher ups” “you mean principals?” “yeah, they’re total hardasses”) and still came out in favor.  Part of me envied what seemed to be a simpler world than the one I inhabit.
The movers left around 1pm, and I spent the rest of the day unpacking and organizing, with a brief interruption when the Comcast tech came to set up the Internet (seamless Internet transition — way to go Comcast!).  He was a character, too.  Mighty grumbly about Comcast as an employer (he’s quitting soon to become an apprentice crane operator) but also super competent and even volunteered to recode the visit as a different type of service so that I wouldn’t be charged for it.
After he left, I spent several hours in organization heaven (a.k.a. The Container Store) working on custom plans for my master closet — and although I’m so excited about it I thought seriously about pulling an all-nighter to get it installed, I decided to go to bed anyway.
So no closets and moving pictures tonight.  Just this one: 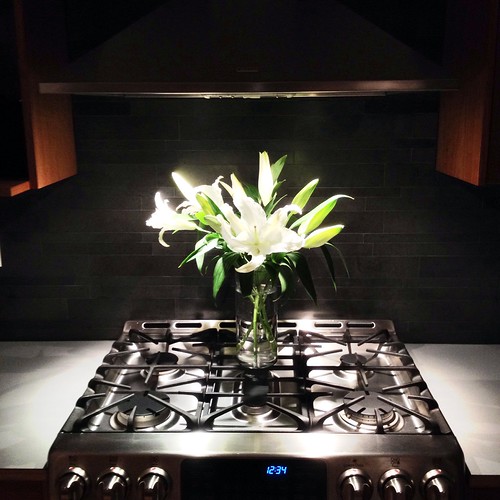 Because even though the house is a mess and full of boxes and packing tape, that’s no excuse not to have fresh flowers.

← The House: Of Moss and Men
The Hike: Autumn color in the Enchantment Lakes →
Follow A More Gentlemanlike Manner on WordPress.com