July 4, 2014 · by JJD · in Japan, Nature, Travel · 1 Comment
As neat as it was to be on top of Mount Fuji, our visit was necessarily short.  It was just too cold, wet and windy to hang around up there.  Plus, with no views, it was kind of boring.  So when the Australian began to complain of the cold (he didn’t have the extra warm layers that Eric and I had brought), we turned and headed back to the Eighth Station. 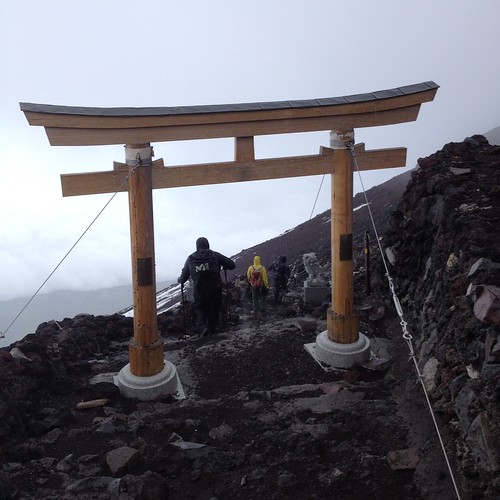 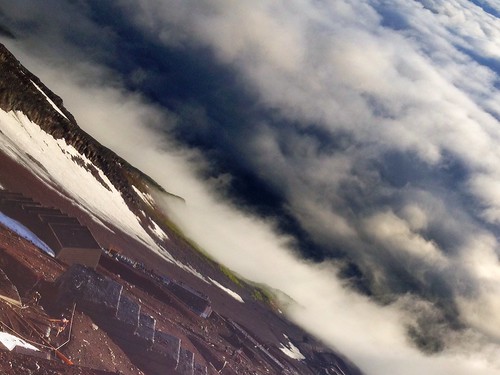 It didn’t take us nearly as long to get back to the Eighth Station as it had taken us to get from there to the summit.  We were the first ones to make it to the top and back, and the guides celebrated by buying us our first round of hot drinks.

As we sipped our hot cocoa and waited for the rest of the group (or at least enough of a critical mass to warrant starting dinner) to return to the hut, the guides encouraged us to change into clean dry clothes so that the people who ran the hut could show us to our sleeping quarters.

After settling into our bed slot, we came back to the common room, where we sat and talked with the other climbers as they straggled in.  After what felt like forever, dinner was served.

It wasn’t late when we finished dinner — only around 8pm — but there wasn’t anything else on the program for the night.  Many people, exhausted from the hike or suffering from the altitude, went to bed right away.  Eric and I lingered and talked for a couple of hours, getting to know two American women who were stationed in the military base in South Korea.  They were traveling together and were quite the dynamic, colorful pair!  The Dutchman couldn’t get enough.

Eventually, though, we couldn’t put it off any longer:  It was time to go to bed [strike the ominous chords], which was easier said than done.
You may not be able to tell from the pictures of empty sleeping bags above, but when I say these beds were tightly packed, I mean that fat Americans or no, it would have been impossible to have packed us in more tightly.  Think of a mummy . . .

. . . and you might start to have a sense of what was going on.  I had to squeeze myself between the two guys lying next to me, and as I lay there with my arms crossed over my chest, with my entire side-body on each side pressed up against the side of the guys next to me, I felt exactly like a mummy taco.  Add to that the eventually overwhelming heat of the heavy sleeping bags, the fact that my pack was hanging only a few inches above my face (such that if I raised my head even slightly I would hit it), and the puzzling law of physics that permits all heavy snorers to fall asleep instantly even in the worst of circumstances, and you’ve got the recipe for the most uncomfortable night ever.

Needless to say, I didn’t sleep much.  Earplugs spared me the worst of the snoring, and after a while I climbed out of my bag (elbowing the guy next to me in the process) and lay on top of it in my long underwear, where it was cooler.  I practiced deep yoga breathing and tried to stave off the feelings of claustrophobia inspired by the bag hanging over my face.  As I dozed, I contemplated the life choices that had brought me to such a pass and tried not to count the minutes until the sun rose and we could escape back down the mountain.