Chicago – Grandma and the bean

April 27, 2013 · by jackjasondavis · in Chicago, Friends, Travel · 1 Comment
Millennium Park is a great outdoor public space that sits between Lake Michigan and a pack of high-rise buildings that stretches out from the city center towards Indiana.  One of it’s more memorable features is a giant sculpture called Cloud Gate. 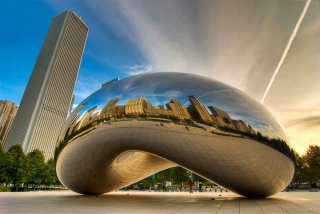 Call it what you will, it looks like a giant bean.  A very large and reflective bean, but a bean nonetheless.  And, as one does with giant beans, we wanted to have our picture taken in front of it.  I handed my camera to Amanda’s grandmother, Rosina, and discovered that 80-year-old French women and iPhone cameras don’t necessarily go together — unless, of course, you’re going for a series of candid shots that capture you at every moment other than the one when you actually think you’re being photographed.

Fortunately Rachel and Susan were standing by with cameras of their own and were able to supplement Rosina’s collection with a few more composed shots.

← Chicago – City of architecture
Chicago – The Joffrey does Othello →
Follow A More Gentlemanlike Manner on WordPress.com