April 7, 2013 · by JJD · in DC, Fitness, Running · 1 Comment
My alarm went off this morning at 5:00am.  A few minutes later I was eating a bowl of oatmeal and checking the weather report.  I warmed up and stretched and pulled on my running gear (and then pulled it off, and back on, going through every possible permutation of shorts/tights/shirt/jacket/gloves before finally coming back to the outfit I’d originally planned last night).  By 7:20am I was standing in the pre-dawn chill on the National Mall with 17,500 other runners waiting for the Credit Union Cherry Blossom Ten Mile Run to start. 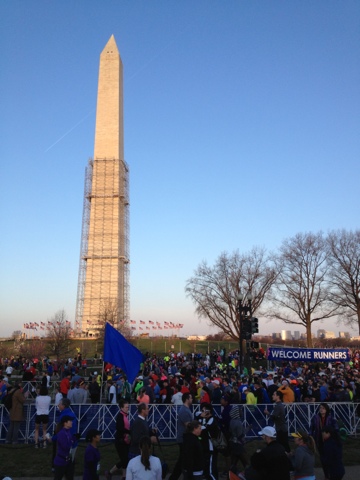 As the horn blew and we shuffled toward the starting gate, I thought, “Holy cow, what am I doing?  Can I even run ten miles?”

Good question.  You see, in October 2011 I injured my knee while training for a marathon — and I haven’t run since.  I replaced running with cycling, and supplemented cycling with weightlifting, yoga and, last fall, CrossFit.  But I haven’t run for more than two years.

So it was kind of a gamble when I signed up for the Cherry Blossom Ten Miler.  A last-minute one, too.  The Cherry Blossom is enormously popular, and entrance is determined each fall by lottery.  I always wanted to run the race, but I never won the lottery during my running days, and then I thought I’d sworn off running and stopped trying.  But then my friend Katie moved to Seattle and offered to me her bib.

That was a month ago, and I figured four weeks gave me plenty of time to get myself back in shape for a road race.  So I bought the bib — and then did nothing to prepare.  Seriously, nothing.  Because the month of March was essentially the Arctic Springtime of Doom, and all I wanted to do was curl up in front of the television while eternal winter raged outside.

Then all of a sudden I started getting emails from the race organizers with messages like “Come pick up your race stuff!” and “See you on Sunday!”  Sunday — as in four days from whenever I was reading that message.  So I picked up my packet and resolved to start training for real this time (as if whatever last-minute cramming I did could actually be called “training”).

Only I didn’t even do that!  Instead, I went to CrossFit on Friday and did 300 double-unders (which is where you jump-rope with the rope going under twice for each jump) — which left my calves completely shot.  Whatever “training” aspirations I had flew out the window as I hobbled around in pain and agony.  I was more focused on making it from my desk to the printer than on running some ten-miler by the river.

So you can see why I felt a little trepidation as I lined up for the race to start.

The good news is that everything went just fine.  I scaled back my expectations for speed and grouped myself with the folks who would be running an 8:30 mile.  I turned on my headphones, found a pace that felt sustainable, tuned everything out, and just ran.  At the 5-mile mark, my knee started acting up, so I pulled out a supporting strap and told myself that if it got any worse, I’d quit the race and go home.  The strap helped, and by mile 7 both knees felt perfectly fine.  In fact, I felt awesome and finished strong.

I came in just under an hour-and-a-half (which is what I’d expected), with an average pace of 8:36 (also what I’d expected).   I placed 691st in my age division, and 3201st among men — which doesn’t sound great (and certainly isn’t remarkable from any competitive standard), but in the context of 17,500 participants, I clearly could have done a lot worse.   For my maiden run after injury and inactivity, I’m happy with these results.   Who knows, maybe I can be a runner again after all!

← You want me on your team
Babies! →
Follow A More Gentlemanlike Manner on WordPress.com