October 13, 2012 · by JJD · in Boise, Family, Nature, Travel · Leave a comment
As you might have guessed from its name, the town of Twin Falls sits on a bluff above the Snake River very near a number of falls.  Some of my relatives said they wanted to stop by Shoshone Falls on the way back to Boise, so I decided to join them.

Unfortunately due to the dry season, the falls weren’t nearly as spectacular as they would be during the wetter months.

Even so, the heights were dizzying (the falls are about 200 ft high, the cliff walls just shy of 700 ft), and the downstream views were very impressive.

For purposes of comparison, here’s a shot of the falls during the wetter season: 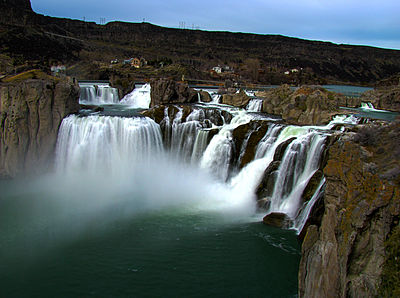