September 2, 2012 · by JJD · in Family, Food, Theatre · 2 Comments
Having sent her husband fishing and her children off to the mines their grandparents’, my darling twin sister has arrived in Washington, DC, for an extended Labor Day weekend.  It’s her first visit to the nation’s capital, so there’s no end of Things To Do — and believe me, I’ve created quite the itinerary.  When I asked her what her priorities were, she said two things:  She wanted to see all the cool stuff in DC, and she’d need to eat frequently, given her pregnancy.  Cool stuff and good food?  No problem — that’s what I do.
We started with brunch at Le Pain Quotidien . . . .
Then went to the National Archives to see the Declaration of Independence, Constitution and Bill of Rights.  Unfortch, all photography was banned inside (the distinction between “flash” and “photography” having escaped the authorities), so all I’ve got is a photo of the exterior of the building. 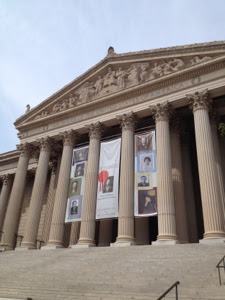 From there, we went to the Natural History Museum, where we saw dinosaurs . . . 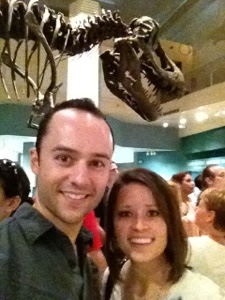 A tiney bird skeleton perched on a branch . . . 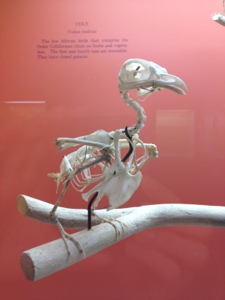 The hope diamond (which was on a swiveling stand, so I couldn’t get a clean shot) . . . 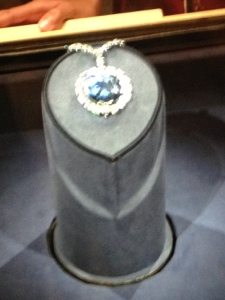 And a giant stuffed elephant . . . 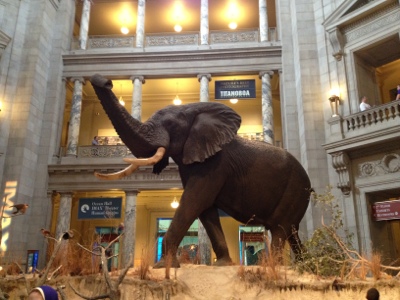 By then we were feeling a little peaked, so we went to Paul for some “lady food.”
Once recharged, we went over to the National Gallery.  By then we only had thirty minutes before closing, so we grabbed a map of the highlights and started running.  We made it through most of them before we got kicked out.
After the museums closed, we went home and changed out of our shorts and sandals and went to dinner at Rosa Mexicano.  We lucked out and were able to take advantage of their three-course restaurant week menu.  We got the fresh-made guacamole as our first course and devoured it before we could take a photo…
With our tummies full of delicious Mexican food, we sauntered over to the Shakespeare Theatre to see All’s Well That Ends Well.

It’s their annual “Free For All” event, meaning that the performance is free and the only way to get tickets is to win a lottery or stand in line for hours.  I entered the lottery for as many performances as I could — and won for all of them!  So we could see it again, if we wanted.  It’s a great show (the same production and mostly the same cast as they did in 2010), but I’ve got other plans for tomorrow.  Stay tuned!

← A room with a view
Sunday Touring →
Follow A More Gentlemanlike Manner on WordPress.com