With the Victoria Square guest house as glorious as it was, I was sorely tempted to linger for a leisurely Easter morning reading in the arm chair in front of those windows . . . but no!  Travel calls!!

Twenty minutes up the road, in the otherwise nondescript town of Falkirk, the Kelpies awaited me.  These massive sculptures aren’t ancient, but they represent an ancient element of Scottish folklore:  the kelpies are water-spirits (not always friendly) that often take the form of horses.  They were cooler in person than I’d expected. 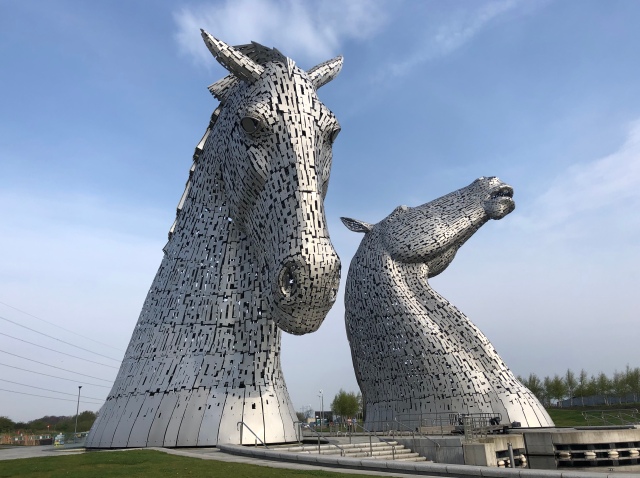 . . . have them drive into what’s essentially a giant bath-tub suspended in a massive ferris wheel for boats . . . 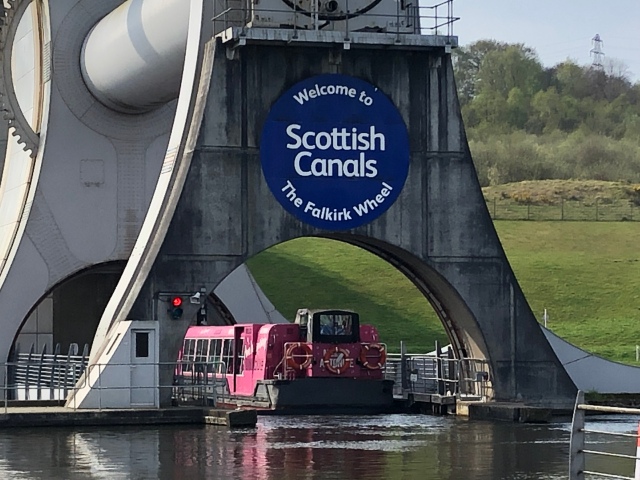 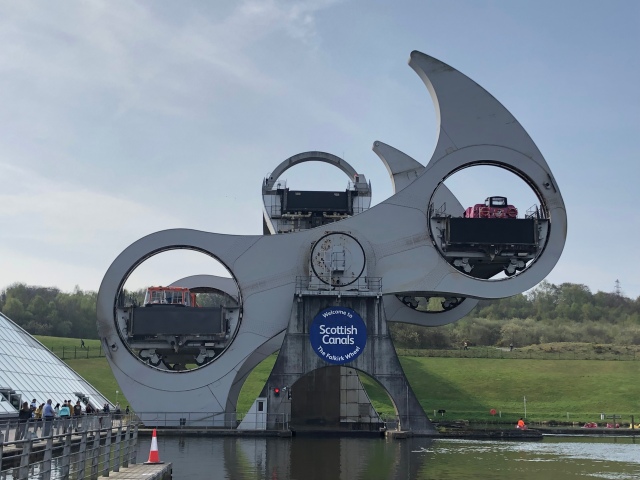 One boat goes up, while the other goes down.  The whole rotation took about 5 minutes, and I loved it.

Leaving Falkirk behind, I drove an hour northwards to Perth, or rather just outside Perth, where the Palace of Scone stands.  The palace itself is only moderately interesting — a relatively late “Gothic” fantasy of the local Earl. 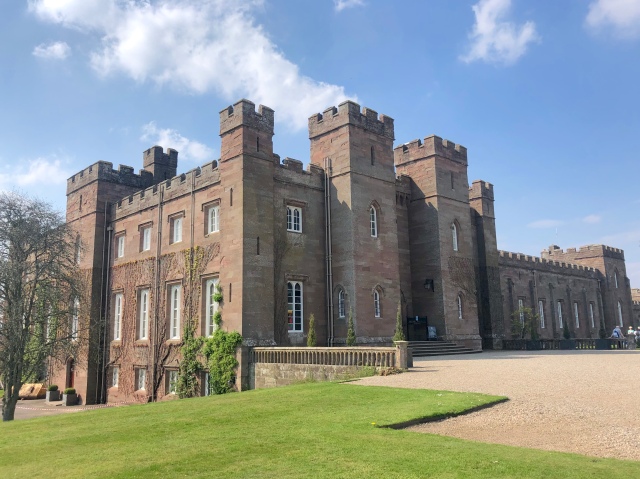 What’s more interesting is the mound of dirt in front of the palace.  This is where the Scottish kings were crowned from the 9th Century onwards.  The king would sit on the Stone of Destiny (stolen by the English a thousand years ago and held at Westminster Abbey until re-stolen by the Scottish in the 1990s; it’s now under lock and key in Edinburgh Castle) and the nobles would all stand around the king with soil from their own lands in their boots.  This meant they could swear fealty literally standing on the land which they held by grant from the king.  The nobles would then dump the dirt onto the mound, and thus it would grow from one coronation to the next.

Nowadays, the mound is a playground for peacocks and picnickers. 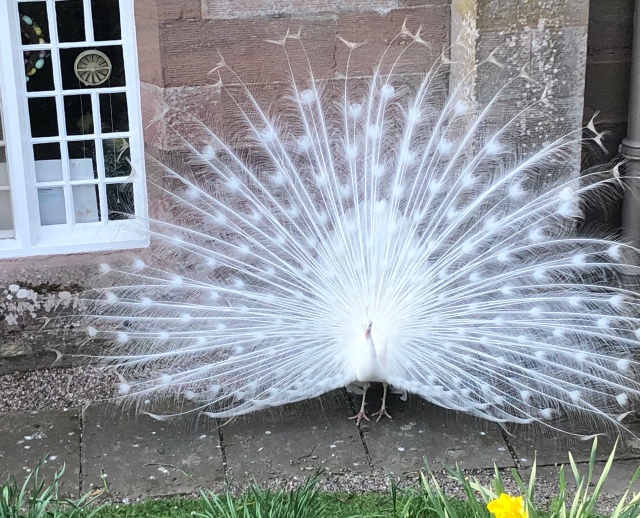 After visiting the park and house, I headed to the cafe:  time to eat a scone in Scone!  (Note that neither word is pronounced as the Americans might think.  The place is pronounced “Skoon”, and the baked goodness “skonn”.

Hopping back into the car for another hour’s drive eastward landed me on in the ancient university town of St Andrew’s (the university is the oldest in Scotland and the third oldest in the UK, after Cambridge and Oxford).  The cathedral, a medieval powerhouse, has sat ruined on the coastal cliffs since the mid-1600s.  It was poignant to see a ruined contemporary of Notre Dame so shortly after the roof off that great church. 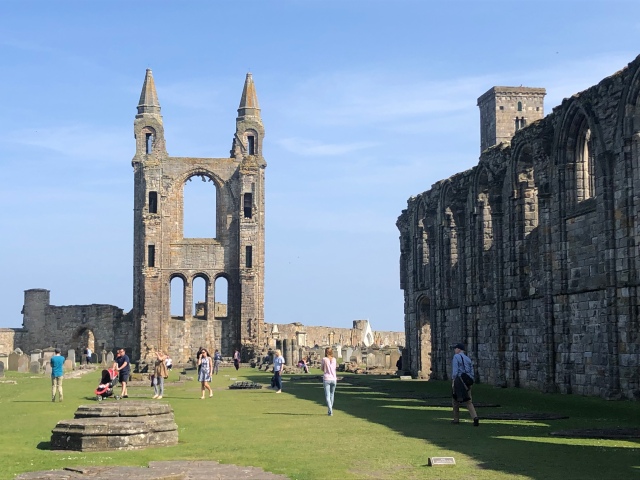 A stone’s throw away stood the equally ruined (but less spectacular) remains of the bishop’s castle. 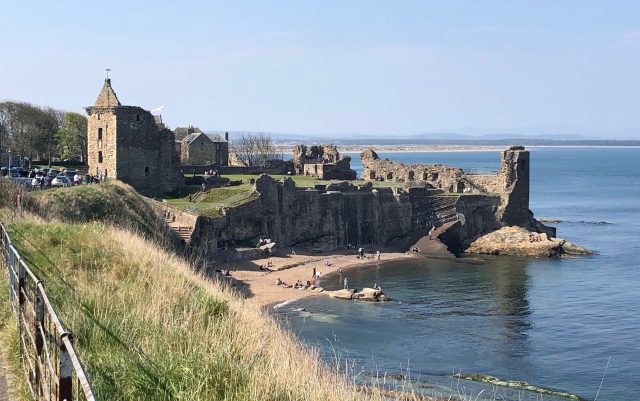 Continuing along the coastal walkway, I came to the world-famous golf course.  The first in the world. 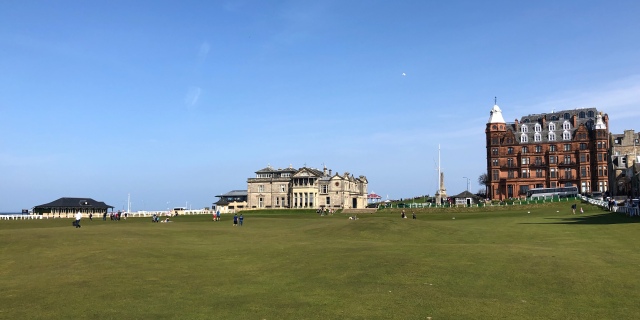 Not being a golfer myself, I didn’t linger long.  Instead, it was time for a quick refreshment.  Turns out the Scots know how to do a pretty mean hot dog, and those fries were the best I’ve had in ages.

And while a good hot dog may be surprising in Scotland, good woolens are not.  In a trice I found myself in Johnstons of Elgin, a tiny shop full of all the glorious tartans I could want, and a couple of little ladies to help me find just the right blanket.  Well, make that blankets.  Because after all, it’s not every day you can buy Scottish woolens, and they can’t be worse to get home on a plane than carpets from Turkey!

Thus equipped for the best of cozy fireside reading, I hastened onward to my final destination:  Edinburgh.  I had booked a room in one of the Marriott properties in the New Town, which had an impressive facade but suffered from being in the middle of major road construction.

For whatever reason, the travel gods smiled down and got me an upgrade — not only would I be on the far side of the building from any noise construction work, I would be in what must have been the nicest suite in the hotel.  Bigger than my apartment in London, it was a corner unit with floor-to-ceiling wrap-around windows and balcony.

Reveling in the luxury, I dropped off to sleep, looking forward to my last day in Scotland.