New Year’s Eve Day was a bit of an odd one.  It felt like a holiday but all the fun wouldn’t start until night-time.  It was also our last full day in Sydney, and Amanda and I wanted to use it to do the last odds-and-ends that had caught our curiosity but not been done yet.

We decided to divide and conquer:  Amanda would spend the morning shopping in Surry Hills; I would go on a bike ride to North Head; and we would rendezvous in early afternoon at the Gallery of New South Wales.

North Head is part of a national park that covers the wilder parts of Sydney Harbour.  We had seen the high cliffs from the ferry on our way to Manly Beach earlier in the week . . .

. . . today, however, was cloudy and the cliffs looked obscure and mysterious in the mist. 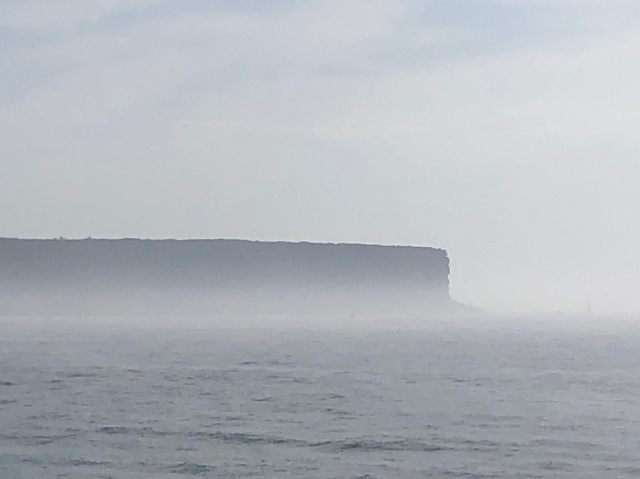 Once off the ferry, I rented a bike from a local shop and, with a map taped to my handlebars, set out to explore.

The trail took me past the sheltered marinas on the harbor-side . . . 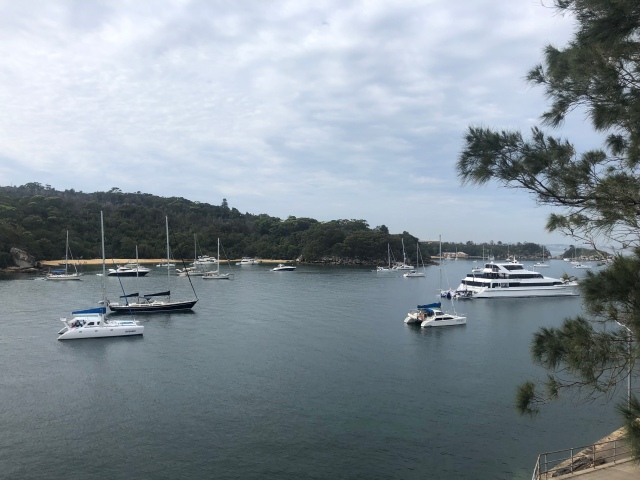 . . . through some lovely, affluent neighborhoods where I saw some fancier versions of the iron filagree that I had seen in Surry Hills . . .

. . . and past many a sign urging me to “watch out for bandicoots”, which are apparently small, endangered creatures.  I’m happy to say that I did not run over a single one. 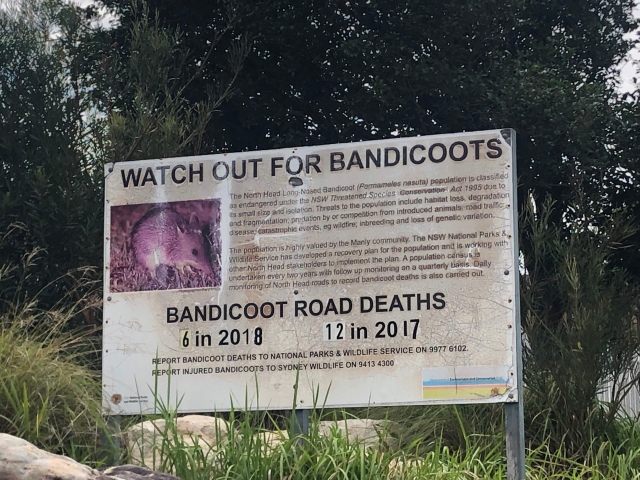 I also saw (but did not run over) a lizard. 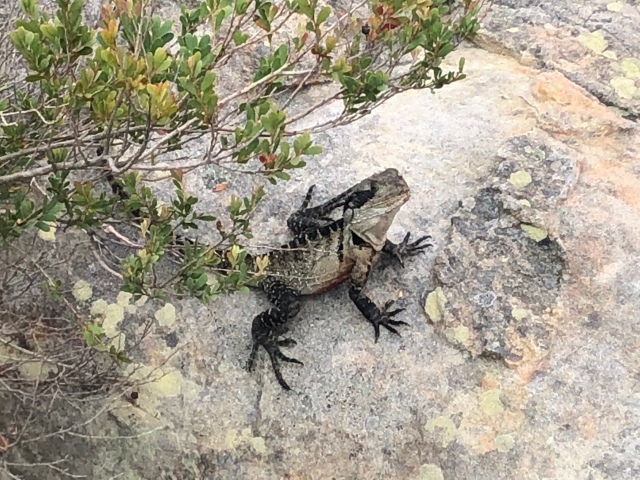 Before long I was out of civilization and back out in the bush.  Through the gaps in the bushes I could see the rugged cliffs and the breakers below. 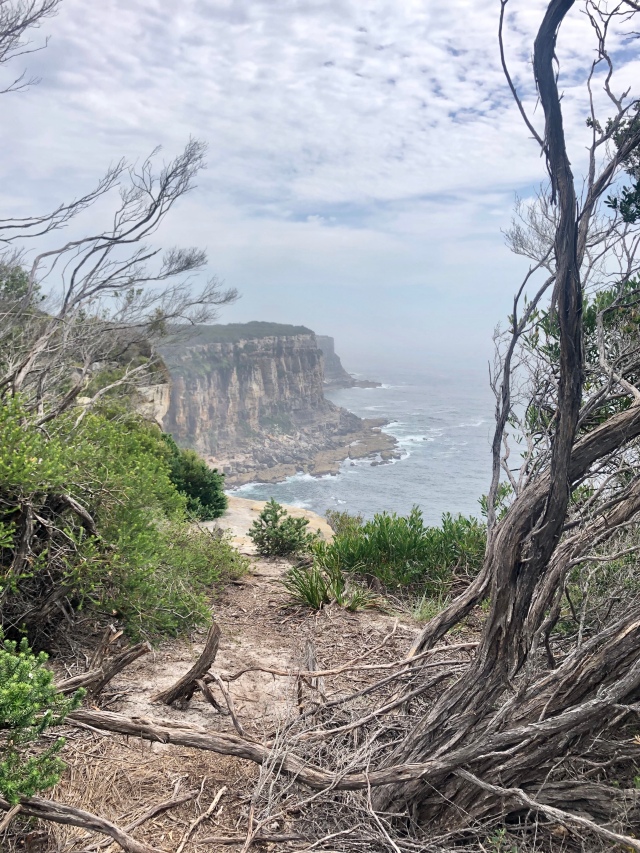 It was all very dramatic, and the mist added an unexpected air of gothic mystery. 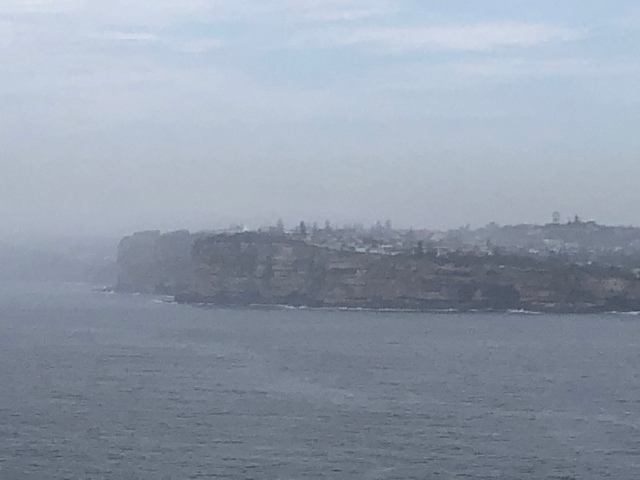 The mist began to lift as the morning progressed, and I could see Sydney off in the distance.

As I was taking photos of the distant city skyline, I realized that there was quite a lot of activity happening right beside me.  Several boats had gathered at the base of the cliffs below, and first one, then another, and finally a third helicopter arrived and buzzed about like bees.

Then the police cars and ranger trucks pulled up behind me and I realized that something unusual was afoot. 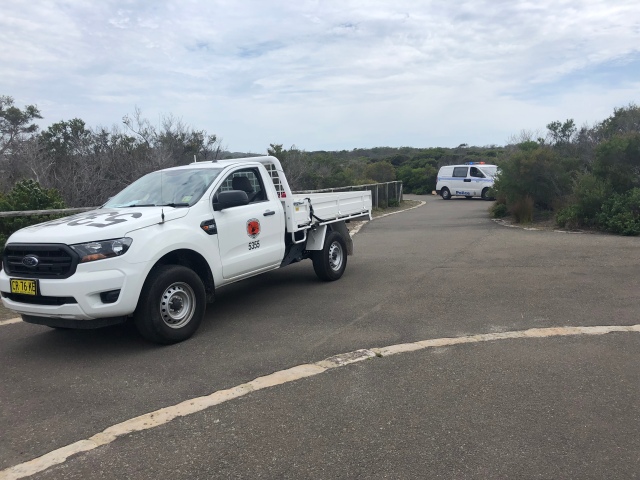 Naturally I followed the police and rangers a few yards down the path and eavesdropped on their walkie talkies.  Apparently there was a person out on the cliffs, and the task at hand was to rescue him.  Sure enough, before too long a man rappelled from the nearest helicopter and disappeared below the edge of the cliff . . . 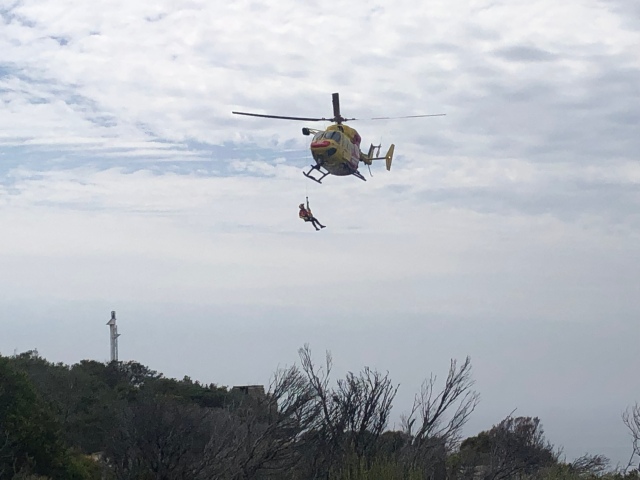 . . . and after a few minutes re-emerged with another man strapped to him on the end of the line.

The rescue chopper landed in a nearby parking lot where the ambulance was waiting (and where I had parked my bike).

I don’t know whether the man had simply been a stupid tourist and got into trouble after unwisely leaving the path, or whether he had come to the cliffs intending to do harm to himself, but he seemed to be okay and was grateful to his rescuers.

It was a thought-provoking moment for me to realize that while I had been taking selfies with the view, a very real life-and-death drama had been playing out before me.  I was impressed by the smoothness of the rescue, and appreciated that not everything in Australia was trying to kill humans, but rather these guys were committed to saving them.