Exploring Rome in the rain

Rome wasn’t built in a day — so the saying goes. And it really can’t be seen in a day, either. But if a day is all you’ve got, you can still cover quite a bit of ground (even if you didn’t think to get tickets in advance to all the good museums and discover they’re all sold out).

I started with a walk through the Villa Borghese, which despite the name is more of a park than a villa (though it has those, too).  I hadn’t made it far before the threatening skies opened.  It rained off and on (but mostly on) for the rest of the day. 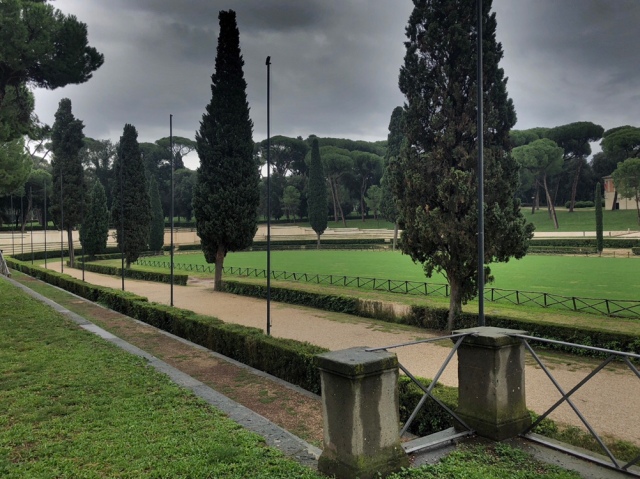 After some wandering I arrived at the western end of the park, on a bluff overlooking the city. That’s the dome of St Peter’s basilica rising there on the right.

From there to the top of the famous Spanish Stairs, which were actually built by the French.

At the base of the stairs, a boat-shaped fountain that I remember thinking so pretty when I saw it for the first time at night 15 years ago.  More than any other city, Rome stands out in my memory as a city of fountains.

Speaking of fountains, I walked over to the Fontana di Trevi, the baroque queen of Roman fountains.  I learned two things about this fountain this time around:  First, that due to the popular belief that throwing a coin into the fountain will ensure the visitor returns, roughly 3,000 EUR are thrown into the fountain each day.  Second, that even though the current fountain was built in the 17th Century, the water is piped from 22 miles away through an aqueduct that was built in 19 BC and is still in use today.

Standing there amidst the crush of onlookers (which I’ve nearly succeeded in cropping out of the photos!), I noticed some details that I hadn’t appreciated before.  Notably the way the “wild” rock formations seem at once to serve as the foundation as well as an encroachment upon the orderly classical facade. 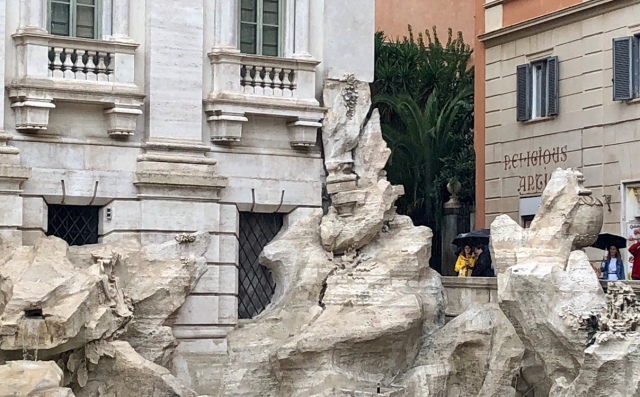 From there down to the heart of ancient Rome:  Coliseum! 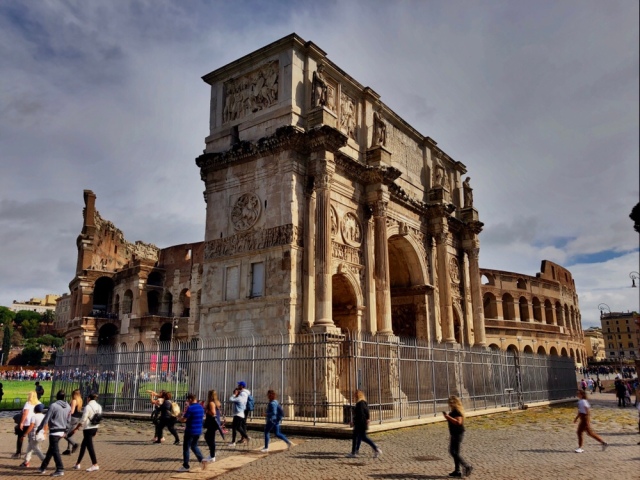 A bunch of ruined buildings from the Roman fora!  Plus a pagan column that the pope felt needed a statue of St. Peter on top. 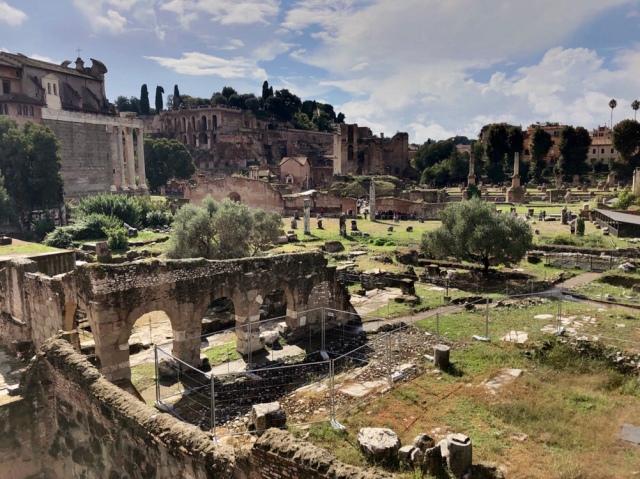 At this point, it was time for lunch.  I found a cute little restaurant where I could get a cypress salad and some gnocchi ragu.

Then back into the streets for more antiquity:  Parthenon!

It’s really a remarkable building.  The largest unreinforced concrete dome in the world, and one of the inspirations for those Renaissance architects to rediscover how to build the domes that grace countless churches, government buildings, etc., around the world.

Then up a few blocks to the lovely Piazza Navona.  It reminded me of the Plaza Real in Madrid, only way bigger.  (This is the obelisk with the bird on it!) 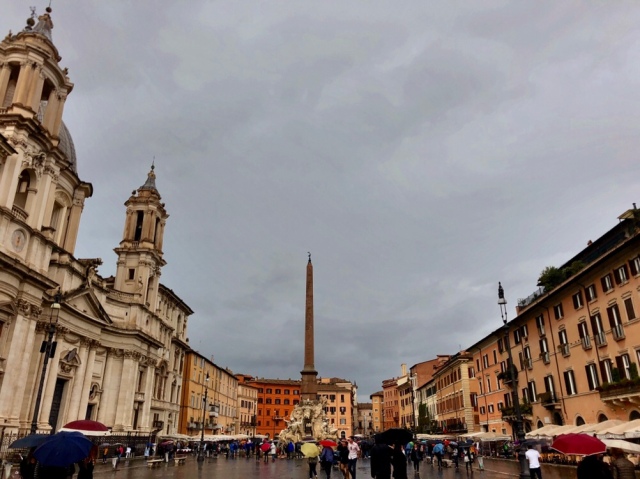 At this point I wasn’t too far from the Tiber River.  I started to catch glimpses of lovely bridges and the dome of St Peter’s basilica in the distance through the droopy tree branches.  Occasionally the sun would burst through the rain and make everything sparkle. 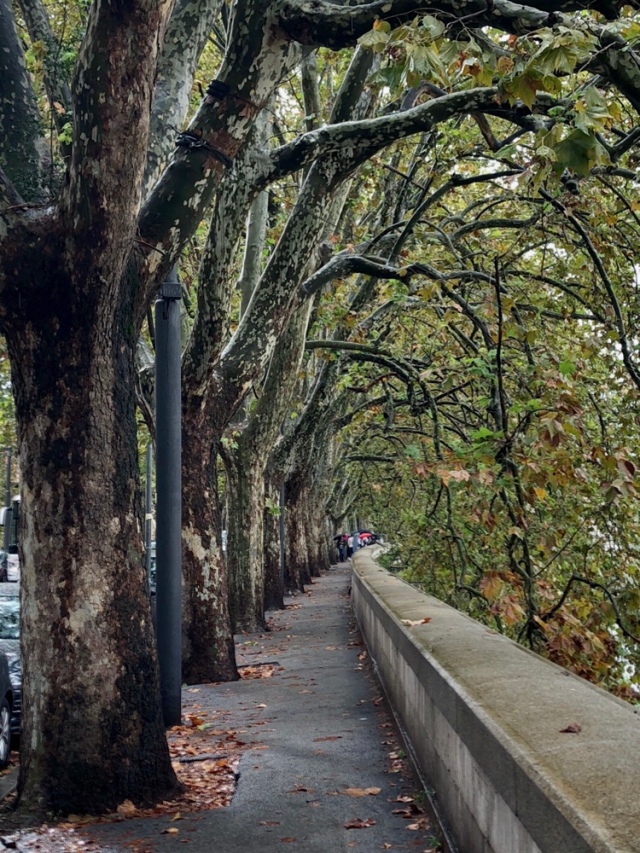 I came to the Castel Sant’Angelo.  It’s such a striking fortress, it pulls on my imagination!  I had every intention of going inside this time, but the sun had come out, and everything I had read indicated that it wasn’t worth the time (it isn’t even mentioned in the Lonely Planet). 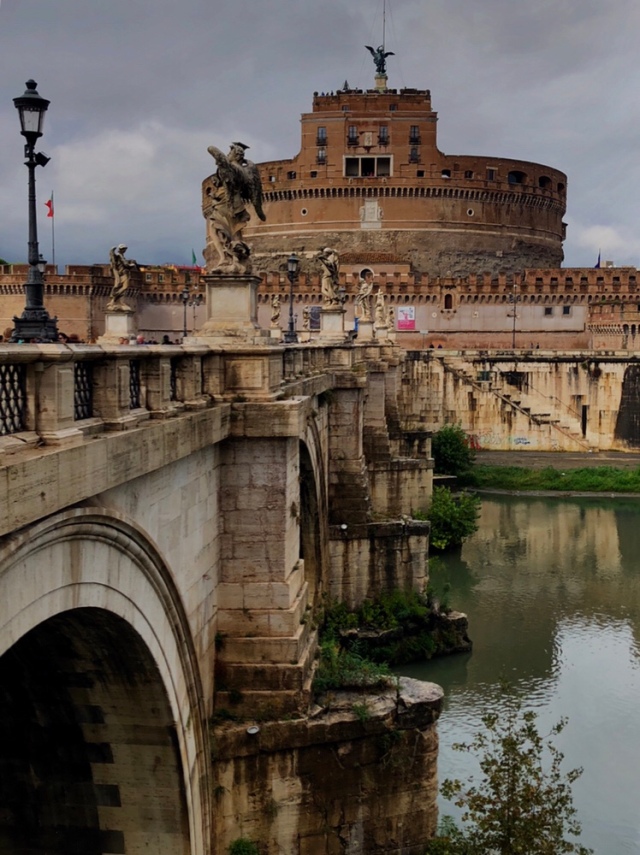 Plus, I had a little pot of tiramisu burning a hole in my bag.  Back at the Parthenon I had stumbled upon a little shop with a menu of 100 different types of tiramisu and outrageous ratings on TripAdvisor — overwhelmed by the choice, I opted for the “classico”.  So I skipped the castle and instead sat on a wall and ate the tiramisu. 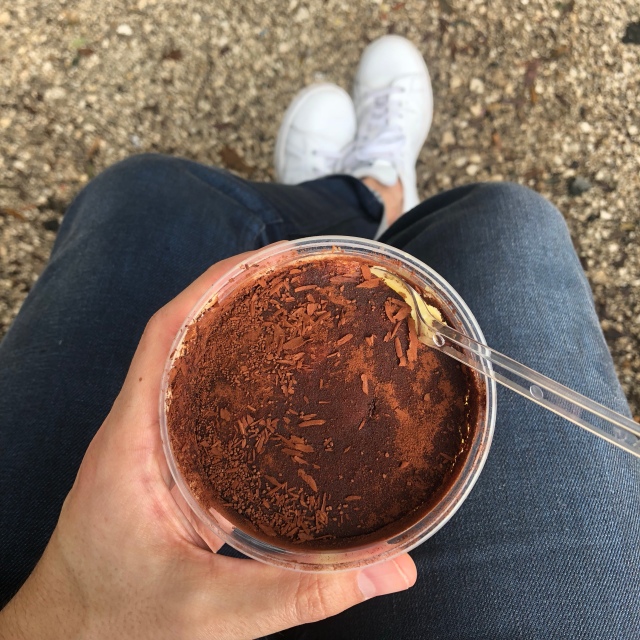 The wall on which I ate my treat was at the mouth of the long, column-lined avenue that led to the Vatican and St Peter’s basilica.  That’s where I headed next.  I mourned for a moment the fact that I hadn’t been able to get tickets to the Vatican museums to see, among other treasures, the Sistine Chapel again.  But at least the basilica was open and free (well, “free” in a monetary sense — I think I waited in line longer than it took me to fly to Rome from Munich).

The inside was just as enormous and ornate as I remembered.  But it felt more crowded.  Last time I had the impression that the space swallowed up the crowds, and I was able to wander contemplatively about the space.  This time there was no escaping the shuffling masses.

And my favorite part of the church, the lovely, poignant “Pieta” by Michelangelo, sitting in an alcove near the main entrance. 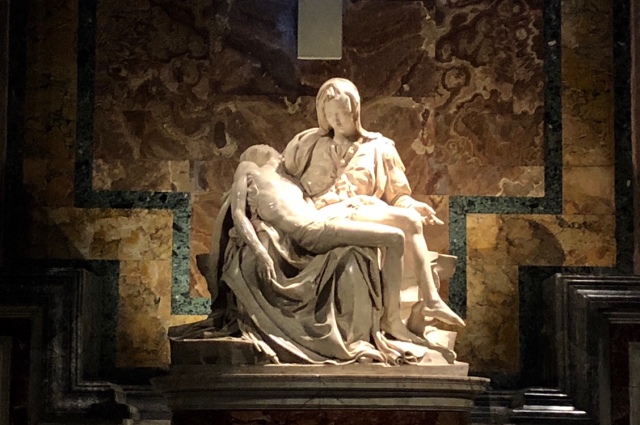 Upon emerging from the basilica, I found the sky had cleared.  Sun!  The puddled streets offered lovely reflections of the Eternal City.

The Tiber, too, had stilled and and reflected the bridges that crossed it.

I headed back to the hotel for a pit stop and to call Justin before heading out to dinner.  Unfortunately, dinner was more challenging than lunch had been.  There were several highly rated restaurants in the neighborhood, but all were fully booked.  Even the ones without any ratings were full.  Finally, I gave up and went back to the hotel — surely the Marriott’s restaurant would be decent!

Needless to say I was horrified to find myself in a cramped back room with plastic tables, not a single other diner, and only hamburgers, pizza, and chicken fingers on the menu.  Trying very hard not to be high maintenance (which I’m pretty sure means that I was being very high maintenance) I informed the staff that I couldn’t eat there and wanted to know why the menu didn’t match the description that had been in the guest book in the room.  Ah! they exclaimed, you want the gourmet restaurant!  That’s over here!

After being shuttled carefully to a much more comfortable dining room full of green velvet and at least one deaf old Spanish man, I sat down to what turned out to be a terrific dinner.  I started with a dish called “roots”, composed of various mushrooms arranged like a tiny forest in a mousse of pureed root vegetables . . .

. . . followed by a delicious bowl of pasta carbonara with black truffle shavings . . . 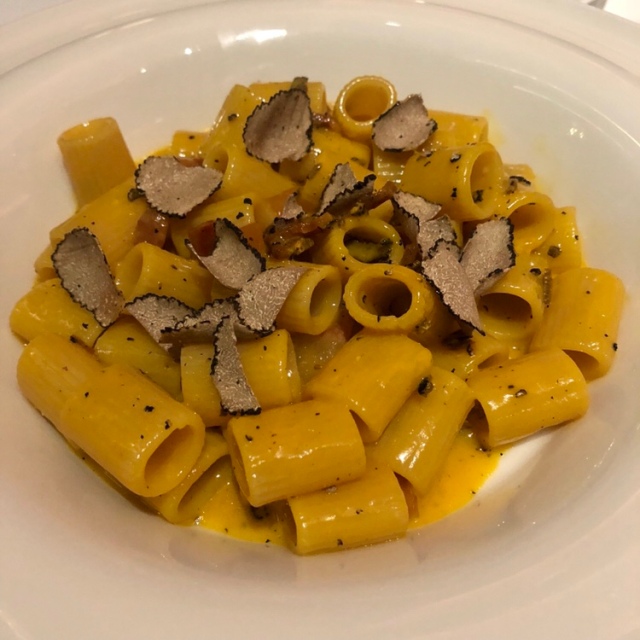 . . . ending with a morsel of cheesecake with raspberry sauce.

Feeling that all was once again right in the world, I went up to bed.  My flight left very early the next morning, so that was all of Rome that I saw.  I have a feeling I’ll be back before long!

← Put a bird on it (or how Rome does obelisks)
Window boxes, autumn edition →
Follow A More Gentlemanlike Manner on WordPress.com