The weather in Paris this weekend could not have been better.  Warm, sunny, glorious.  Perfect for visiting one of the more notable French chateaux:  Vaux le Vicomte.

If you’re a garden/architecture/art nerd like myself, then you’ll know that Vaux le Vicomte was built in the mid-1600s by a guy named Fouquet who was the finance minister and thought he needed a house to match his prestige.  He brought together a dream design team — Le Vau (architect), Le Brun (interiors), and Le Notre (gardens) — and basically ended up inventing the French classical style that (spoiler alert) would become known as Louis XIV style.  The young sun king saw that the chateau and gardens surpassed anything he had and, well, you know what happens when you fly too close to the sun… Fouquet was imprisoned for the next 34 years until his death, and Louis XIV hired the team to build Versailles in the same style but on steroids.

The chateau has been on my travel list for years and it lived up to expectations.  The front approach was instantly recognizable from the framed architectural elevation that I’ve had hanging in my house for years . . .

. . . Le Brun’s interiors were gorgeous, though incomplete in places (e.g., the coupola; that’s what happens when the king gets jealous) and in other places updated to a later century (the 18th century, which particularly in the grey and yellow bedroom felt strangely contemporary) . . . 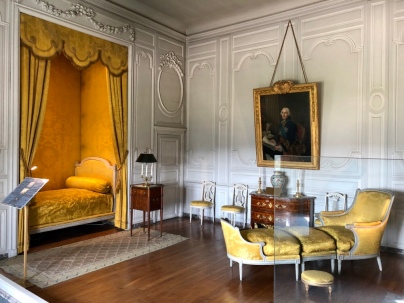 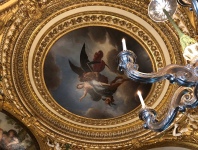 . . . but it was the gardens that I was most excited to see.  They surrounded the chateaux in complete harmony with the architecture and interiors.  In fact, they were so integral that as you approached the chateau, you could see all the way through the chateau to the gardens and out to the golden statue of Hercules clear at the far end (if you scroll back up and look at the first picture, you’ll notice you can see through the three arches–called the “transparency”; the gleaming gold statue was visible to the eye but didn’t register in the photo).

These are the definitive French classical gardens.  All about man’s mastery over nature, there’s nothing “natural” about them.  Vast expanses of perfectly manicured lawns, topiary, reflecting pools and fountains.  They’re laid out on varying levels, so that you can’t ever see all of the garden at once–that way it reveals itself to you as you stroll through it.  It’s a great contrast to the “natural” look of the English landscape garden (which developed in the following century and although it jettisoned the formality was just as man-made and just as replete with references to classical Greece).

I strolled around for quite a while, admiring the effect and imagining the great parties that were thrown out there — the fireworks and banquets and people running around in extravagant clothes.  And then I took a nap in the sun on one of the raised terraces with a cross-view of the garden.  Bliss.

On the way back to the chateau, I soaked up the symmetrical perfection of the house and gardens.

Best of all, there was virtually no one else there with me.  Unlike Versailles, which is mobbed by enormous tour groups, there were only a few other visitors wandering around (or picnicking on the grounds).  It was a great way to appreciate the place at my own pace and without the crowds.

← I’m in Paris!
The rest of Paris (at least for now) →
Follow A More Gentlemanlike Manner on WordPress.com