Weekend with the Bard

I went to work on Friday fully expecting to work late that night and then continue working all through the weekend.  There’s more work to be done than I can accomplish during the week, and I don’t like waking at 3:45am with a ball of anxiety in my gut.  But the weather has been incredible–sunny, upper 70s, all the spring flowers out.  I decided to do something else instead.

I opened my travel books and started looking for doable weekend trips.  I landed on Stratford-upon-Avon, discovered that (a) it was only about 2 hours from London, (b) it was Shakespeare’s birthday this weekend, and (c) there was still room in one of the better ranked B&Bs and tickets for the Royal Shakespeare Company performances.  I booked the room and the tickets and headed out late morning, after trying to clear out as many of the “real life” errands as I could.

I left from my Marylebone train station after snacking on a Cornish pasty . . .

. . . which I was grateful for later when delays on the train meant that I arrived much later than expected to Stratford-upon-Avon.  The B&B was a flowery little Edwardian house not far from the train station, run by a friendly and efficient couple.  They welcomed me in, handed me a map, and left me to my own devices.

Despite a sudden downpour, I wasted no time and set out right on foot to visit Anne Hathaway’s cottage.  Anne Hathaway was Shakespeare’s wife, and this is where she grew up.  Her family built the place in 1463 and lived in it (and expanded it) for over 400 years, until in the 19th Century the cottage was converted into a sort of living museum.  Now it’s one of the five core Shakespearean sites in the town, boasts a lovely garden, and is staffed by knowledgeable, friendly docents.  I saw the “wooing” chair in which the young William purportedly sat while courting Anne.  And I loved the willow arbors in the gardens, which I assume are not true to the period but which are very cool for being made of live willow saplings that are trained to grow into a basket-like shelter.  (A portion of the garden was left fallow with the explanation that it was battling “bindweed” which sounded like a plant Harry Potter would have had to wrestle in a herbology class…).

After wandering the grounds and asking questions about thatch (it cost GBP 70,000 last year to rethatch the cottage!) and grab a bowl of soup in the cafe, I headed into the town center to find Shakespeare’s birthplace.  It’s in a handsome Tudor house that had belonged to Shakespeare’s father.  The building itself was fairly bare but more interesting than I had expected.  The main thing I noticed is that “houses” back then do not match our notions of what a comfortable house would be today.  The rooms feel random and there’s a ramshackle quality (which, granted, may be due in part to how the 500-year-old structure has settled over the years).  In the visitors’ center there were a few artifacts on display, including one of the first folio’s of Shakespeare’s plays.

After visiting the birthplace, I wandered down to the waterfront of the Avon river, accidentally found some delightful blue-and-white cereal bowls to add to my collection (because touring is always so much more fun when encumbered by housewares) . . .

. . .  and then spent an hour FaceTiming Justin and people-watching (I remembered too late just how much battery FaceTime eats up and that I had forgotten my charger, so I ran on fumes for the rest of the evening and then was quickly dead this morning.)

I grabbed a quick pre-theatre dinner at an Indian restaurant nearby and then headed over to the theatre.  he Royal Shakespeare Company’s theatre complex is pretty impressive.  It’s right on the riverbank, surrounded by green parks, with swans and boaters and people everywhere.  The show I saw was in the Swan Theatre, which is smaller of the two performance spaces–from the outside it looks like a Victorian neo-gothic chapel, and on the inside it looks very similar to the interior of the old Globe theatre.

Perhaps counter-intuitively, I did not see a Shakespeare play.  Instead, I saw The Fantastic Follies of Mrs. Rich, which turned out to be a great choice.  It’s an obscure play from the late 1600s written by a woman named Mary Pix.  This was not a happy era for women playwrights, as they were generally vilified for being unladylike, and Mary Pix’s plays have generally been ignored through history.  But the RSC has revived this one, and I thought it was great!  I suspect the production was somewhat touched up for modern audiences (similar to David Ives’ “transladaptation” of The Liar), but it still fit well in the vein of 17th Century farce.  What I liked about this play is that it was completely focused on the women characters.  Some were silly, some admirable, some clever, some not — and each of them had agency and a mind of her own.  Also?  This is the first play I’ve ever seen with an honest-to-goodness sword fight between women.  Completely implausible, but I loved it.  Made me think of Virginia Woolf and wish yet again that more women had had money and a room of their own to write. 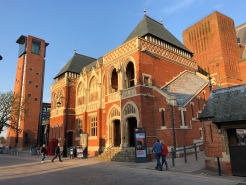 After the show I wandered around town in the dark before heading back to the B&B.  The night was dark and stormy (it’s been ages since I heard so much thunder!) but by morning it was gloriously clear and sunny again.  After a quick breakfast downstairs with the other guests, I headed out for another walk about town.  I walked along the river and found the old church where Shakespeare is buried. 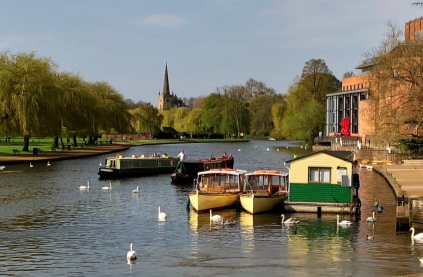 I couldn’t wander too long, though, because I needed to check out by 10am and catch the train back to London.  It turns out the trains in that part of England are not quite as easy as the subways and buses in London . . . I ended up missing the quickest train back and having to take a more circuitous route up through Birmingham.  But all’s well that ends well, and I made it home safely and with no greater mishap than having lost my sunglasses in the train.

← The weather’s getting nice
Weekend trip to New York! →
Follow A More Gentlemanlike Manner on WordPress.com