I saw and touched and went inside one of the seven wonders of the ancient world!  Pretty incredible.

The Great Pyramid was built some 4,500 years ago.  That’s mind-blowing to me.  I mean, woolly mammoths were around for roughly another 1,000 after it was built.  That’s farther before the birth of Christ than we are after it.  In other words, so old that all other oldest things I know (ancient Greece, for example) look young in comparison.

There wasn’t all that much to do but simply take them in.  We clambered up the first couple rows of “bricks” (think two-ton boulders) to get a sense of scale, and then drove around to a couple of different viewpoints.  I liked the simplicity of it. 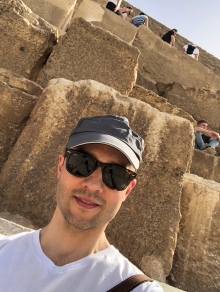 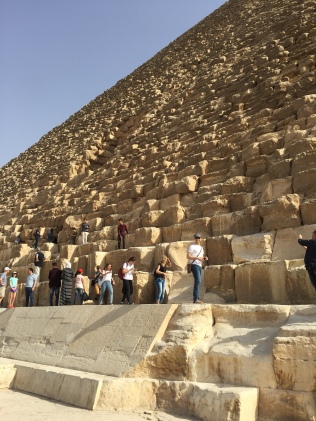 Then the guide asked if we wanted to go inside.  At first I said, “absolutely!” but then he said that I would be crawling on my knees most of the way and that gave me second thoughts.  Remembering how I felt in the narrow, crowded portions of the underground cities in Turkey, I decided that rather than brave the Great Pyramid (which was also many times more expensive), I would opt for the smallest of the three pyramids, when meant shorter tunnels and fewer people.  It was a good choice.  I had to crouch down a very steep tunnel into some very small, warm, and stuffy chambers where a couple of pushy locals tried to get visitors to pay them money for “helpfully” announcing that we were at the base of the pyramid and we should watch our heads.  Still, discomfort aside, incredibly cool. 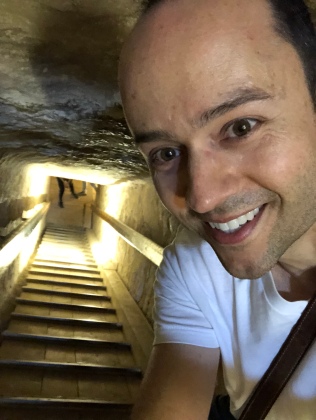 After taking our fill of the pyramids, we swung around to the great sphinx on our way out.  Unlike the pyramids, the sphinx was gated off so we could only see it from a distance.  It’s beautiful and mysterious and as graceful and fine as the pyramids are angular and powerful.  I would have loved to be able to stay longer soaking it in.

← We made it
Egyptian museum →
Follow A More Gentlemanlike Manner on WordPress.com