June 27, 2014 · by JJD · in Japan, Travel · 2 Comments
Last night Amanda told me that, after the onsen, her number one priority in Tokyo was to visit the Akihabara neighborhood, or “Electric Town” as it’s often known.  When we got back from Hakone, we headed straight there. 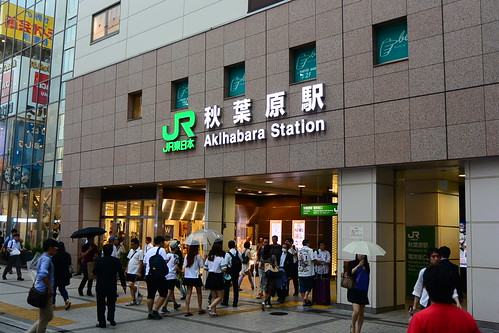 With little experience in Japanese-oriented geekdom, I had no idea what to expect.  The guidebook simply said that the neighborhood grew up as a black market for radio parts in the post-WWII years and is now known as the place to go for new and used electronics.  What the guidebook did not say is that IT’S A TOTALLY DIFFERENT PLANET!  One that caters to a weirdly adolescent male fantasy and qualifies as one of the most foreign and bizarre places I have ever been.

At first glance, the neighborhood seemed normal enough — even if you did think that Sega stopped being a thing back in the 1980s. 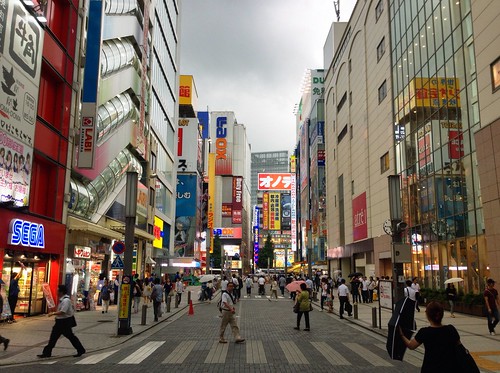 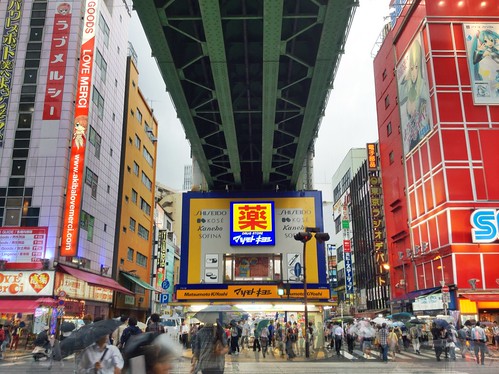 Only then you start noticing the shops and what they’re selling:  Hypersexualized school-girls literally as far as the eye can see.  Some of it’s cartoonish and harmless enough.  Some of it’s frankly pornographic.  All of it obviously designed for consumption by the hordes of men and boys (ranging from early teens to thirty-somethings) that thronged the streets and packed the shops.  (I did see a few teenage girls amongst the men, but they were few and far between, and most of them were wearing the same sort of sexy school-girl outfits that their anime counterparts sported on the magazine covers.)

As we worked our way through the streets and the shops (Amanda was searching for something very specific for her brother-in-law; nobody had it), we saw a billboard for what surely must be a “Maid Cafe”.  We had read about these earlier in a pamphlet we’d gotten from our concierge, but we had had no idea what they were.  Well, we were about to find out! 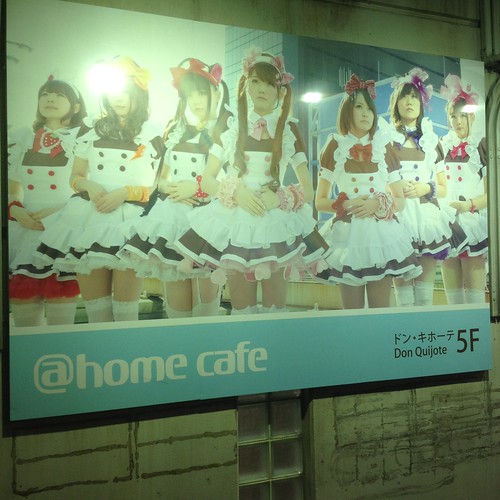 Following the directions on the billboard, we found the entrance to Don Quijote . . . 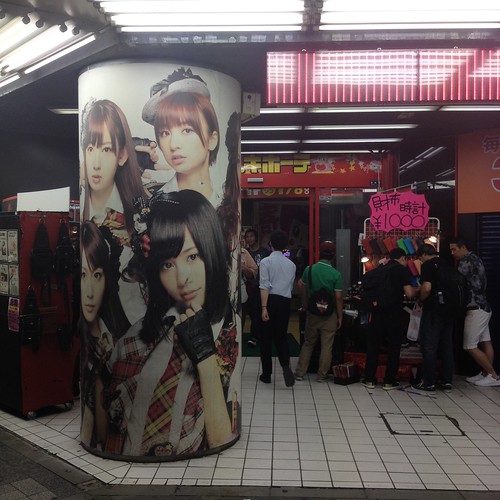 . . . and took the escalator to the fifth floor.

The fifth-floor escalator left us at the entrance to the @Home Cafe.  A whole new world of cute opened up before us.  Behind the counter were a handful of young girls (I’m hoping they were all at least 18, though I have my doubts) wearing frilly pink and brown costumes designed to make them look simultaneously like innocent schoolgirls and sexy French maids — they wore their hair in pigtails with ringlets, their knee-socks stopped just before the ruffly garters, their voices were high-pitched and infantile.

The lone boy in the crowd (probably no older than the girls; he was not in a maid outfit) greeted us and handed us a laminated page with English instructions:  A purchase of food or beverage was required.  All visits could last no more than one hour.  No touching allowed.  Amanda and I gave each other a look of “what on earth!” and said we wanted a table for two.

One of the girls led us through a narrow hallway into the main “dining room”.  There were no tables, only rows of benches facing forward.  Aside from us and two middle-aged tourist women in the back, every other patron in the room was a single man (at least when we started; some other women did come in later, but they seemed to be friends with the girls).

Our hostess handed us a menu with a la carte items, as well as a handful of prix fixe options.  Interestingly the prix fixe options included more than just food and drink — they also included some sort of interaction with the girls (or “maids”, as they were called): you could get a photo with a maid or play a game with a maid.  When Amanda and I both selected the most basic option (one beverage plus one girl thing), the hostess recommended that we get one of the specialty drinks, “Because then a girl will come and shake it in front of you.”  Mmmkay.

Then she asked us to select which maid activity we wanted (I chose the photo; Amanda, the game) and which maid we wanted to do it with.  To aid in our selection, she pulled out a white-board with pictures of the available maids.

Holy cow!  What was going on here?  We were essentially being asked to select from a menu of girls which one we wanted to perform a designated service.  Was this a distant cousin of prostitution?  Was it a modern incarnation of the geisha tradition?  Is there even a distinction between the two?  Regardless of where we landed on the spectrum, I couldn’t bring myself to actually pick a girl.  So I let the hostess pick for me, as if somehow that absolved me of complicity in the girl’s objectification.

After taking our order, the hostess brought us a picture book to “read” while we waited for our drinks and girls to arrive.  Let’s just say it was on the fluffy side but still totally appalling . . . 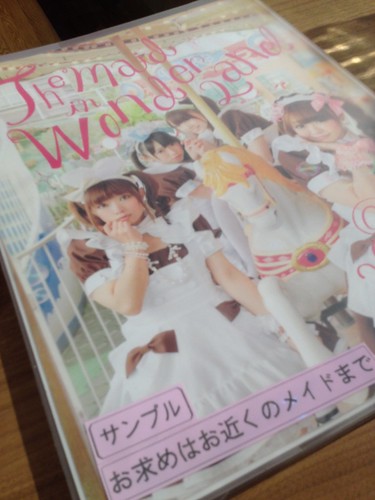 Soon enough one of the girls came to our bench with a couple of glasses and some drink shakers.  She made it clear that the mixing of drinks was to be a group effort.  She would shake the shaker and chant cute monosyllabic words that sounded like babytalk, and we would repeat it back enthusiastically.  After which, we would follow hear lead in holding our hands in heart shapes over our drink, like some sort of uber-cute benediction.  All this happened as directed (if nothing else, Amanda and I are good instruction followers!) and we were left with revoltingly sweet, jewel-toned potions that were impossible to drink (but which sure looked cute!). 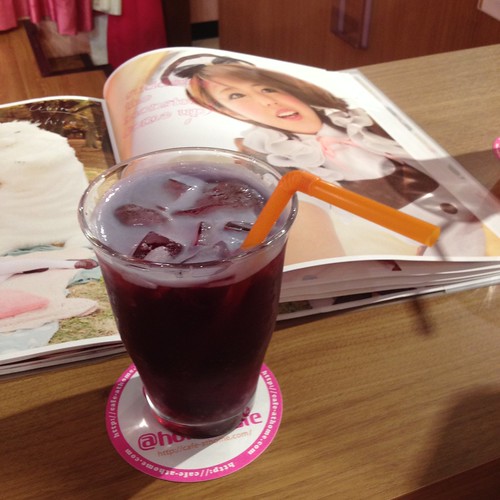 More time passed and we waited for our girls to show up.  As I watched them caring for the other patrons, I was more and more convinced that we were witnessing a bizarre descendent of the geisha tradition.  My understanding (which admittedly comes primarily from reading Memoirs of a Geisha, and I have no idea how much of that work of fiction is historically accurate) is that the geisha were trained to entertain their male guests through conversation, refined femininity in gesture, speech and appearance, and the rituals of eating and drinking together — but in most instances not through sexual favors.  Here, there was certainly a sexualized (though strictly hands-off) quality to everything about the cafe, and the main goal seemed to provide a venue for these solitary guys to interact with and be entertained by these cute, vivacious girls.  Some of the men, judging by their appearance and obvious discomfort, were not often in the company of attractive women who paid them any attention.  Pathetic, but there you have it.  (Later Amanda described the place as super feminine and I objected — to me, this is one of the most masculine places I’ve ever been, in the sense that it seems to be the literal embodiment of of a purely male fantasy.  A place created by men, for men, where women serve as props.)

But I have to admit, when our turn finally came and our maids came to us, I kind of got the appeal of a place like this (kind of like how, when I shot my brother-in-law’s guns, I finally got understood why someone would want to shoot an assault rifle).  I mean, these girls were good at their job!  For example, when my maid, Chimu, called my name to come get my photo taken, she seemed genuinely excited to meet me and grateful that I had selected her out of the group.  She enthusiastically motioned me onstage and helped me pick out a prop (bunny ears!) and a pose (hearts!).  And then, when it was time to leave, her fond farewell actually seemed to be a fond farewell — even though we had interacted for only a few minutes at most!  I found myself buying into it (pun intended), believing that she liked me and wanting her to like me; I loved it when she said I had a good smile, I was pleased when I caught her eye on the way out.  There was obviously nothing sexual in my interest in her, but still my emotional response to her friendly and affectionate attention was real.

And ALSO SUPER WEIRD!  Because at the same time the other part of my brain was going, WHAT THE HECK ARE WE DOING HERE AND WHY DO YOU HAVE BUNNY EARS ON YOUR HEAD? 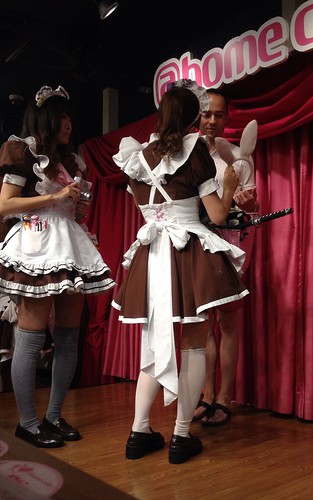 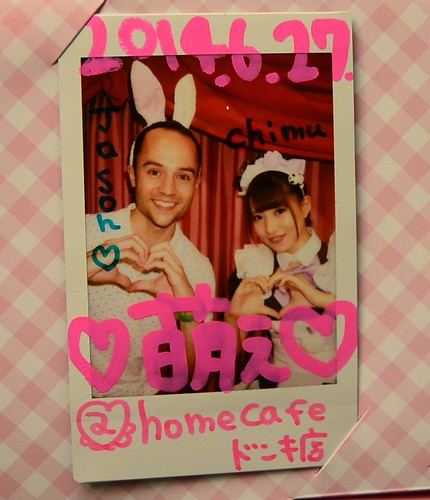