January 22, 2013 · by jackjasondavis · in DC, Friends, Work · 3 Comments
Today President Obama was inaugurated to his second term as president of the United States.  Technically he was already sworn in, having officially taken his oath of office yesterday (January 20th being the prescribed Inauguration Day), but since yesterday was a Sunday, all of the public pomp and ceremony happened today.

Four years ago I spent Inauguration Day at home, watching events unfold online, while gazillions of people froze outside in the below-freezing temperatures.  This year I still had no desire to stand around for hours in the cold (even if it was only in the mid-40s), but I didn’t have to worry about that — instead, this time I was invited to the fancy inaugural reception that my firm (which is located on Pennsylvania Avenue, just a couple of blocks down from the White House) holds for clients and the attorneys who work with them.  We’ve got a fantastic rooftop terrace with views over the city and, more importantly, the Inaugural Parade route.

I got to the office early.  I didn’t know what the crowd situation on the Metro or in the streets around my office would be like, and in any event I had plenty of billable work to keep me occupied until the party started.  As it turned out, the Metro wasn’t any more crowded than during an ordinary rush hour, and the masses downtown hadn’t quite materialized when I passed through.

I went up to my office and worked.  It’s nice how productive you can be when you sacrifice a federal holiday to come into the office and work.  As I worked, I listened to CNN’s coverage from the Capitol Building and kept an eye on the crowds outside.  As you can see, the crowds were focused on the Mall, leaving Pennsylvania Avenue nearly deserted until after the swearing in. 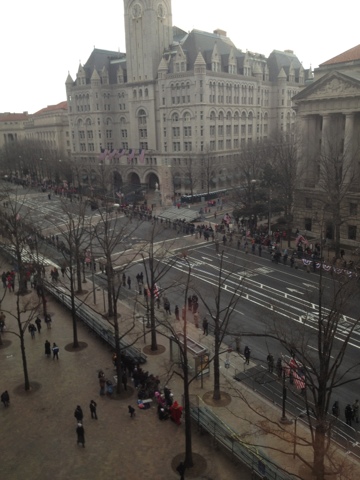 There was a brief buzz of activity late morning when the presidential motorcade zipped up Pennsylvania from the White House to the Capitol Building.  The motorcade is always surprisingly long, and it always travels surprisingly fast — which is why I only got a photo of the tail end of the polic escort and not the President’s car itself. 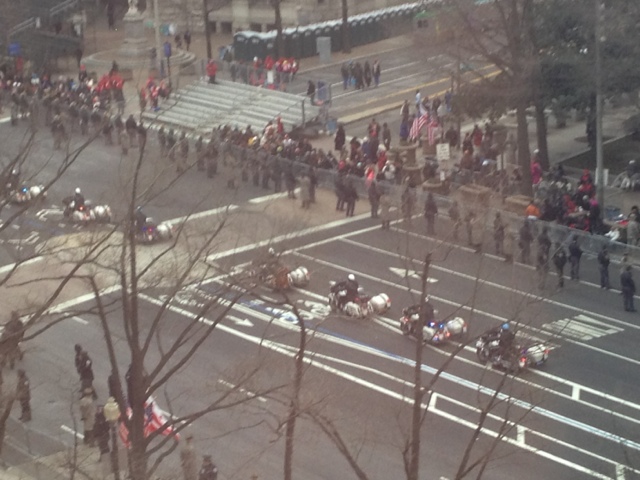 Some people like watching the motorcades because it gives them a sense of witnessing power and Important People.  I actually don’t like motorcades at all because, to me, they’re the sort of demonstration of power and Important People that puts me in a mood for the French Revolution.  As I watch those shiny black limousines cruise with their massive security detail, forcing everyone else around them to stop and wait, I can’t help but think of the absolute power of the monarch and the privilege of the aristocracy, and I understand a little bit why le peuple got so upset.

Fortunately, however, this is the USA, 2013, and not France, 1789, so we did not have a rebellion or cut off anyone’s head.  Instead, we were treated to two interminable prayers, some songs from pop-stars, a weird (and boring) poem, a couple of swearings in, and one very good speech from the President.  Then it was over; time for lunch.

I’d love to say that I ate the delicious lunch that was served at the client reception.  But I can’t.  Turns out, these reception-style meal events are pretty tricky when you’re wearing Invisalign retainers.  Either you eat with them in, risking an atrocious smile as food particles work their way between the retainers and your teeth, or you unceremoniously rip them out in front of everyone and stand there holding your plate in one hand and your teeth in the other, looking for all the world like some crazy old coot from the Ozarks.  I chose a third option of skipping the food and making my rounds with only a drink in my hand.  Then, once I’d seen everyone I wanted to see, I went down to my office and ate a peanut-butter sandwich at my desk (at least I’d had the foresight to bring food!).

After lunch the party dispersed to find suitable viewing locations for the parade.  The parade goes right down Pennsylvania from the Capitol to the White House, passing right in front of the firm.  Most of the lawyers who have offices on the Pennsylvania side of the building left the crowded rooftop terrace in favor of their own, less crowded offices.

I did the same.  Tim, a friend of mine (who also happens to be a client), had come to the party with a couple of additional friends.  I invited them into my office to watch the parade.

I’m happy to have been downtown for the inauguration, and I’m happy to have seen the parade.  Can’t get more Washingtonian than that!  To be honest, though, it was pretty anti-climactic.  If it hadn’t been for Tim and friends, I’d even go so far as to say it was boring and a waste of time.

Part of the problem is that we’re dealing with a second inauguration, which inevitably is less exciting than a first inauguration.  Believe me, four years ago this place was electric with insane positive energy — it literally felt like Christmas for a week.  Not so this year.

But also there’s my whole French Revolution hang-up (which maybe I should just call cynicism lest I give the French Revolution short shrift).  I just don’t buy into the pomp and ceremony of politics and the state in action — and having devoted the entire day to watching the parade only to see a few black cars and some high school marching bands doesn’t exactly help.  Next time I think I’ll just stick to listening to the speeches and songs from the comfort of my own living room.

← Planes, paintings and long-lost relatives
I’ve got goldfish in my fridge →
Follow A More Gentlemanlike Manner on WordPress.com