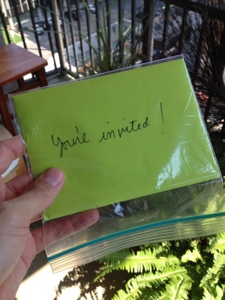 It was an invitation to brunch.  Apparently he’s an economics professor at Marymount University who rides the trails every morning.  In the course of his rides he tries to get to know the regulars (each of them has a name — White Helmet Guy, Skinny Intense Commuter Girl, Sean Connery Guy — collectively, they’re “Trailers”), and every year he and his wife invite everyone to a big brunch party so they can get to know each other’s real names and share stories about their rides/runs/walks on the trails.  I was invited! 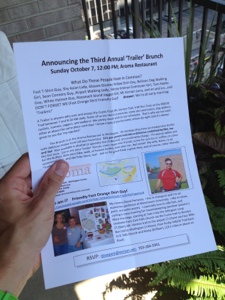 I love this idea and would totally go.  Unfortunately I’ll be out of town for a wedding on the day of the event, but I’m definitely going to keep my eyes peeled for “Friendly Fast Orange Shirt Guy” from now on.  Maybe I’ll be invited to next year’s do.