July 23, 2012 · by JJD · in Travel · Leave a comment
What to say about our last full day in Fez?  I’m not really sure.  It was productive and exhausting, more like work than play.  One of those days that come a little after the midpoint of these two-week vacations, when you just need a break to take care of business and recharge your batteries.

The primary business of the day had been following us since Marrakesh in the form of bundled carpets.  Each of us had bought several carpets in the red city, but we hadn’t had time to ship them to the US before leaving for the desert.  No chance of shipping from the desert, and when we arrived in Fez everything was closed for the weekend.  Given that tomorrow we leave again for Spain, today was our only window for shipping.

We prepared last night by researching the various options:  The Moroccan postal service was recommended by the locals as being significantly cheaper than FedEx or DHL.  But the Moroccan postal service has no website (at least that we could find) and we were leary of losing parcels en route.  FedEx, on the other hand, would likely be more expensive but also more reliable.  Plus, they had a website with hours, locations, etc. — all very helpful, confidence-building information.

Well, it would have been helpful information if it had been correct.  It was hard enough to find a taxi that would take us from the old city into the new city (three different cabbies claimed never to have heard of the major street where we wanted to go, despite my willingness to show them a map), but then, when we finally got there, we found nary a trace of FedEx.  We puzzled for a minute and then asked a woman sitting on a nearby stoop whether she knew of the FedEx office.  “Oh, yes,” she said, “it’s gone.”

Right.  Of course, gone.  I asked her if she had any idea where it had gone to, and she threw out a few ideas, then solicited a few more ideas from a fellow stoop-sitter.  As they debated amongst themselves as to the new location of FedEx, a third man came out from the door behind them and gave me yet a third location:  Next to the studios for one of the main TV stations.  Because naturally I know where those are.  When I asked for an address everyone assured me that no one had any idea what the address was, but it was somewhere over there (general wave to the north) and that it would be easy to find.

Turns out they were right.  I hailed yet another taxi and told him we wanted to go to the TV studios; he nodded and took off through the traffic.  After a few winding turns we found ourselves on a strange little road full of miscellaneous shops and, at the corner, a very closed-looking FedEx.  Closed-looking but not actually closed — thank heavens — so in we charged, looking forward to wrapping up this adventure.

What followed instead was an adventure in wrapping up.  The FedEx clerk took one look at our pre-wrapped bundles (prepared so carefully by the carpet shops) and told us that they would cost nearly three times to ship as it would cost for us to repackage everything into the standard FedEx boxes (which themselves cost a small fortune).  Amanda quickly calculated that she’d be better off paying the airlines surcharge for extra baggage, so she kept her carpets wrapped.  I, on the other hand, needed to send a box — and so with razor blade in hand, I went to town on my little bundles and the mounds of wool inside.  It took some doing, but between me and the two incredibly helpful FedEx employees, we were able smash everything into a single box. 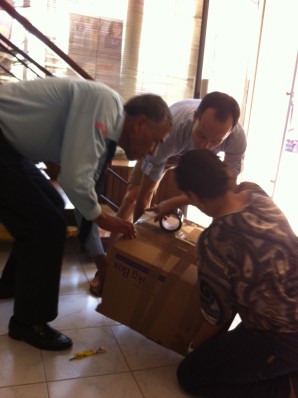 Then came the paperwork and the payment (gasp) and the decision to delay shipment of the package long enough to ensure that I would be back in the States and available to respond to any customs questions on the day of delivery.  I left that office sweaty, tired and very grateful for polished American business operations (even if they cost a lot and can’t figure out how to update their address on the website).

Having finished that project, we found ourselves with an unscheduled half-day ahead of us.  We decided to dive back into the markets to see if we couldn’t find some lamps, ceramics, textiles and other gift items that had evaded us so far.  We succeeded in finding each of those items but were less successful in completing the purchases.

In the textiles department, I found exactly the embroidery I’d hoped to find — rich, heavy embroidery typical of this region of Morocco.  And yet the shopkeeper was totally uninterested in selling it to me.  Indeed, after letting me into his store and turning on the light, he went back outside and sat in the street until we left.  The fasting of Ramadan seemed to have sapped his salesman’s zeal.

Not every shopkeeper was so afflicted.  We stopped in a leather shop and came away with an item that Amanda had been eyeing all week.  We also stopped in a ceramics souq and encountered our most aggressive salesman yet.  He was a young guy, a bundle of faux-friendly aggression, clearly hoping to make a big sale on an otherwise slow day.  He hounded us through the souq and into his backdoor warehouse — which turned out to be quite a treasure trove of ceramics, lamps and other sundries.  Amanda migrated toward the lamps; I focused on ceramics — Fez being known for its beautiful white and blue ceramics.

After about an hour we had narrowed down our selection to a very smart array of finalists:  a set of vases and plates for me; two bronze lamps for Amanda.  It was time to talk numbers.  And talk we did — but unlike other negotiations, where both parties understood they were playing a game and were willing to play by the rules, these negotiations took on a more frustrating turn.

The problem stemmed from the absolutely outrageous initial quotes from the shopkeeper.  I mean, honestly, there is no way he could seriously have expected me to pay more than $1,200 for the set of ceramics I’d selected.  Yes, they were pretty, and yes, they seemed to be good quality.  But puh-lease.  I’m not an idiot.

I did, however, speak too quickly in responding.  In the excitement of the moment, I countered with a number that seemed right — as a percentage of the original quote — but then immediately regretted it when I calculated the conversion into dollars:  I had just said I would spen more than $500 on dishes.  Egad.  So I started backpedaling — I told him I had misspoken and needed to cut out two-thirds of the pile and get the price down to a reasonable place.  He wasn’t happy, but I held my ground.  After a contentious back-and-forth, which involved his meeting and just barely beating my initial counter-offer, and my awkwardly renegging on that counter-offer (and then nearly getting up and leaving), we finally came to an understanding:  I got nearly all of my original pile (less one dish only) for a small fraction of the original asking price.  It was exhausting and neither party, I think, came away with a particularly good feeling.

Amanda, unfortunately, had worse luck.  The shopkeeper’s asking price for the two lamps was even higher than his quote for my dishes.  Having priced similar lamps in Marrakesh, Amanda knew he was trying to fleece her and countered with an equally absurd counter-offer.  The problem, though, is that although he had been willing to go the rounds with me, he apparently had no interest in doing so with Amanda.  Was it because he was tired of dealing with me?  Were the lamps really worth more?  Or did he not take her seriously becuase she was a woman?  Probably some of all three.  The last one, in particular, seems plausible.  While many shopkeepers will engage in “couples jokes” in which the woman is declared to be “the boss”, I’ve noticed that in nearly every situation where I’ve been an active presence, I’ve been taken more seriously during the negotiations.  To the point that I’ve started to subtly engage even in negotiations where I have no interest and have been sitting on the sidelines the whole time.  If I feel like Amanda isn’t getting her way, I will start shifting about as if I’m about to leave the store.  I haven’t been methodical enough to tell if this has actually made a difference, but these gender dynamics of negotiating in Morocco have been super interesting.

In any event, we left the shop with lots of dishes and no lamps.  Naturally our shopkeeper dragged us to a nearby carpet shop, where we were treated to a tour of a gorgeous 15th century home and a presentation of the most beautiful carpets we’ve seen so far in Morocco.

But we were tired and feeling shopped-out — and as much as we subscribe to the theory that you can’t have too many beautiful carpets, we haven’t yet reached the point where pocketbooks allow that theory to become reality.  So we thanked the shopkeeper for his time (this guy, unlike our ceramics guy, was unbelievably polished in his approach — the detour was worth it just to see him in action) and headed back out into the streets to lug our treasures back to the riad.