Boy, this week has gone fast!  We’ve almost reached the weekend and I’m still processing last weekend, which was action packed, of course, but perhaps more ecclectic than usual.

On Saturday afternoon I went with a friend of mine to see a roller derby tournament out at the DC Armory.  This was part of the DC Rollergirls league, and we saw the bout between the DC Devilcats and the Majority Whips.  I knew about roller derbies from Whip It, which is a fun movie, but had never seen one myself.  They’re a pretty rough-and-tumble affair — those girls are no dainties!  But the spectacle (both on and off the track) is wonderful — lots of tattoos, piercings, skinny jeans and at least one man in a kilt.  Obviously, I stuck outlike a sore thumb until I went behind this screen and acquired the body of a tough blond roller girl who may have been named Ovary Action: 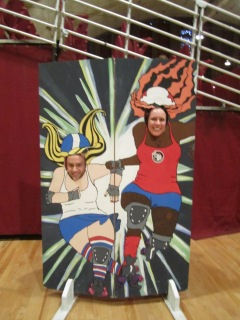 As for how the roller derby actually works and how you win — I have no idea.  We hadn’t bothered to read up on the rules or scoring mechanisms beforehand, so the whole thing made pretty much no sense.  We started to figure some things out after watching for a while, but even by the time we left it was still bewildering.  In any event, here’s a video so you can see what it looked like:

Later that night, after a neighborhood barbecue with some friends who live on Capitol Hill, I saw Arias with a Twist at the Woolly Mammoth Theatre.  It’s another other installment of the Basil Twist Festival, this time involving a collaboration between Joey Arias, a New York drag performer, and Basil Twist, the puppeteer I wrote about a while ago.  I hadn’t quite known what to expect (other than spectacle, of which there was boatloads), but this New York Times review from a previous performance in New York gives a pretty good description.  My sense is that it was all well done, but it’s not my favorite genre of performance. 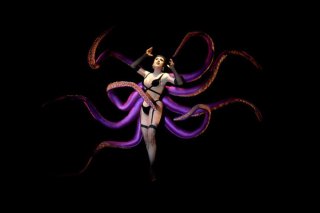 The next day I saw a new production of Strange Interludes at the Shakespeare Theatre Company.  There had been a lot of buzz about this show in the press (click here for the Washington Post’s review) because it’s a famous play by a famous playwright and is famously never-ending — the original script runs over 6 hours, I think, and was generally performed with a generous dinner break in the middle.  This production, fortunately, had been cut down to a mere 3 hours and 45 minutes. 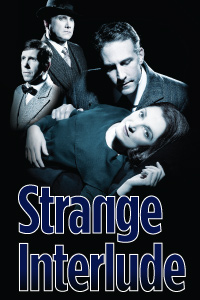 Interestingly, the play was neither fast-paced nor particularly spectacular (just four people sitting around talking) and yet it was totally gripping the entire way through.  Essentially, it’s a story about a woman, three men who love her, and the memory of a fighter pilot killed in World War I:  The woman loved the fighter pilot, but he was shot down and killed during the war.  Out of grief and a sense of guilt, she has a nervous breakdown and then abandons her morals in order to “comfort” wounded soldiers.  Eventually she meets a smart doctor and his nice but stupid friend, and she marries the latter out of a sense of obligation rather than love.  When she becomes pregnant her mother in law tells her that the family is genetically insane and that she should abort the baby (which she does).  Consumed by the loss of her baby, she asks the doctor (who is not insane) to get her pregnant so that she can still be a mother and make her husband happy.  The doctor goes along with the request and then the two of them end up falling madly in love with each other and being miserable for the next twenty years as she raises the baby as the son of her husband and continues the affair on the side.  Of course, during all of this time, she’s still completely obsessed with the dead fighter pilot, naming her son after him, raising him to be like him, and writing a novel about him — all of the other men hate him and try to be like him.  Eventually they’re all old and unhappy; the husband dies and the son finds out about his parentage, but the lovers are no longer in love, so the woman marries her fussy “replacement father figure” bachelor friend who is a novelist and has been chastely in love with her from afar this entire time.  The end.
It wasn’t a happy story, but the complicated situations gave a lot to think about, particularly when it comes to why we do what we do in relationships and how selfishness, meddling and love (or the lack thereof) can hurt or help the people around us.