Paris, Day 2 – Versailles (getting there)

We visited Versailles today and in so doing filled a conspicuous gap in my exposure to French culture.  For all the time I’ve spent living and traveling in France, I had never been to Versailles.  During previous trips to Paris I’d either been otherwise engaged (for example, in tracking down Martinicans to interview for a sociolinguistic research project) or it was bad weather (the palace of the Sun King should be seen in the sun, not under pouring rain) or I was simply too broke to pay for the train ride and entrance fee (there were the days when a single banana and a pair of Twix constituted my entire daily sustenance).  I’d always told myself that I would be back and that I might as well leave something to see for the first time during future trips.

Well, here I am, back in France on just such a future trip.  The weather was what you might call “severe clear” (not a cloud in the sky), and we’d agreed to devote the day to visiting the palace and grounds.  This product of the rayonnement de la France finally made it to the mother ship.

The Train to Versailles
Versailles is about half-an-hour outside of Paris, in a suburb of the same name.  We rode in the double-decker RER (on the top, of course). 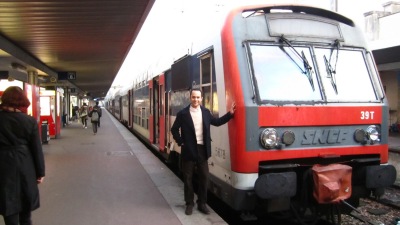 Main Entrance to the Palace
After tumbling out of the train (with all the other passengers), we made our way through the very bourgeois suburb of Versailles toward the palace.  The palace sits at the top of a rise, and as we approached I had very much the same feeling I had while ascending the Acropolis in Athens.  I suspect that feeling is exactly what Louis XIV wanted:  The entire complex is an architectural and artistic effort to coopt the symbolism of classical mythology to reinforce the power of the French monarchy. 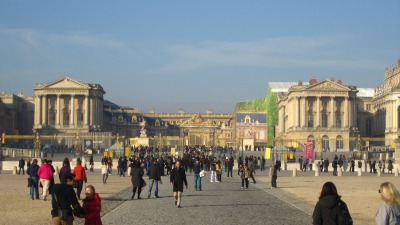 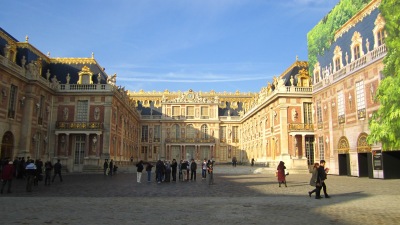