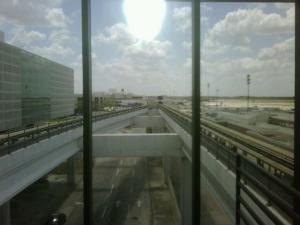 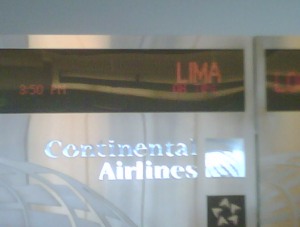 Stage one of our trip entailed getting up at 4:30am and flying three hours to our first scenic destination: Houston Intercontinental Airport.

I generally think that, when traveling, one should put the most important things first, lest unexpected events prevent one from doing or seeing them — so it was a real treat to find flights that would accommodate a six hour layover here. Even so, as anyone who has been here can attest, six hours isn't much time to take in everything this airport has to offer.

The fun started well before we got here. When we arrived at the departure gate in DC at 4:30am, we found that we would be flying with none other than the entire team of the Houston Dynamo (apparently Houston has a pro soiccer team). We immediately set out to find Amanda a boyfriend. She initially protested that she cared more about their brains and conversational skills than their athletic figures but later admitted to a certain weakness for nice arms (or, if none of those could be had –these being soccer plaers after all — a well-turned calf).

Upon arrival in Houston, we embarked on an ambitious layover itinerary that consisted of:

I feel like there's still so much to see and do here — we could probably spend 12 hours here and still not see everything (I mean there's still all of terminals D and E to explore). I guess that just means we'll have to come back!

← Yay, I’m a llama again!
Another stamp in the passport →
Follow A More Gentlemanlike Manner on WordPress.com