It’s open studio season! And yes, I bought all the things.

Remember all the potter friends I made at the ceramics fair in Oxford? Well the ones with studios in London had open studios this weekend, where they let you come in and see their work spaces and also buy whatever they have on hand.

I started out in Greenwich with Maze Hill Pottery, which is where Lisa Hammond and works with several apprentices and former apprentices. It’s and adorable little former post office building right off the railroad . . .

There were four potters on display. Lisa Hammond is the best known and most prominent in the pottery community. She’s known for her soda firing, where she shoots soda and salts into the kiln and gets really interesting chemical reactions in the glazes.

When I saw her work in Oxford I wasn’t particularly impressed, and originally I hadn’t planned to go to the studio, but her name kept cropping up everywhere, so I decided it was worth a closer look. And seeing more of it helped. I got a better sense of what she’s trying to do, and I began to appreciate it more. So I got a few pieces that I thought might fit nicely into my daily life at home–and, weirdly, the more I look at and handle them, the more into them I become. I might need to get more of her work eventually.

And then I picked up a couple of pieces from the other potters on display, Daren Ellis and Francis Lloyd-Jones. Because the pots were beautiful and I like the idea of supporting young talent.

Then back to the flat to drop everything off and take an Excedrin before heading out to Hackney to see Karen Bunting’s studio.

She was a complete dear and remembered me from Oxford and the dish I had bought from her there. We talked for a while and she showed me around and I came away with a few more pots of hers, too. I really loved that while I was there nearly everyone who came in seemed to be an old friend or previous customer. She clearly has a loyal band of followers who appreciate her work.

I’m amassing quite the collection! I have uses for some of it now, and am hoping I’ll have uses for more if it once I get back to the States! 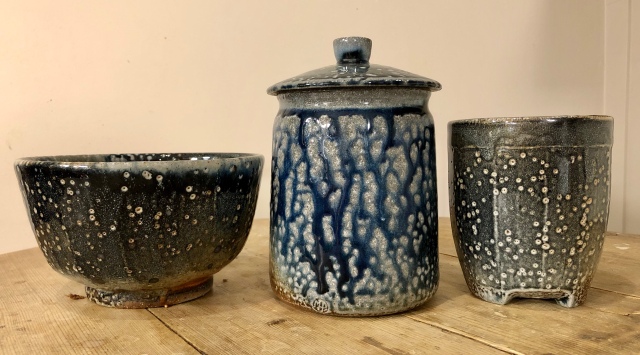