The morning after the Chelsea Flower Show I drove out to Oxfordshire in search of some of the masterpieces of Lancelot “Capability” Brown, the 18th Century landscape designer who perfected the English “Landscape Style” and is considered by many to be the Shakespeare of gardening, so great has been his influence through the centuries.  Before Brown, the style was all French: highly manicured and geometric, with formal bedded parterres, tree-lined allees, and canalised water features with fountains and ornate statues.  Brown wiped all of that away and created “natural” landscapes with great vistas of meadows, trees, and serpentine lakes and streams.  Of course, the natural look was achieved through a great deal of effort and artifice — hills were leveled or raised, rivers diverted, lakes and ponds created.  But the resulting impression is one of effortless, idealised natural beauty.

Think of the big public parks in the US — Central Park in New York, Volunteer Park in Seattle, Sugarhouse Park in Salt Lake — they all descend from this English Landscape style.  It’s literally everywhere.  And to be honest, since I expected these “originals” to feel like something I had seen before, and that I would find them a bit boring.  I mean, I like flowers and Brown didn’t believe in flowers.

But I was wrong.  These garden-parks were breathtakingly beautiful.  The first one I visited was Blenheim Palace, which is kind of a big deal from a country house perspective, being one of the largest houses in England and the only non-royal, non-episcopal house to be called a palace . . .

. . . but I was there for the garden.  So after a quick spin through the baroque state rooms, I headed out into the garden.  Past the bridge, which he flanked with groves of beech trees . . . 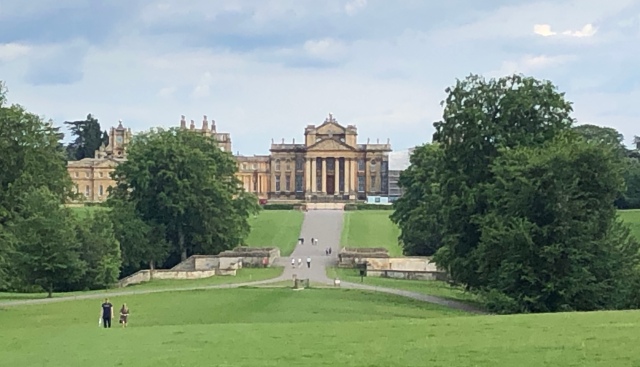 . . . and beneath which he dammed a tiny stream to create a beautiful lake with a scale to match the bridge and house . . .

. . . and which epitomizes the landscape design, with its swathes of meadowy lawns and romantic wooded island.

The park goes on for hundreds of acres, and I walked through much of it.  But I found my phone camera inadequate to capture the scope, so I finally stopped trying and just walked and appreciated the tranquil, harmonious parkland around me.  The tree specimens were exquisite and made me wish we had more places where trees could grow to their full potential, rather than being cropped and deformed to fit in our city spaces.