I flew in from London on Friday night; Justin landed a couple hours later from Seattle. We rendez-voused at the hotel near Bryant Park and enjoyed what turned out to be just the most lovely spring weekend in the Big Apple.

Saturday morning started out with a tasty but disappointingly served breakfast at Le Pain Quotidien . . .

. . . and then stumbled upon a bagpipes festival with Scottish high schoolers in the park. 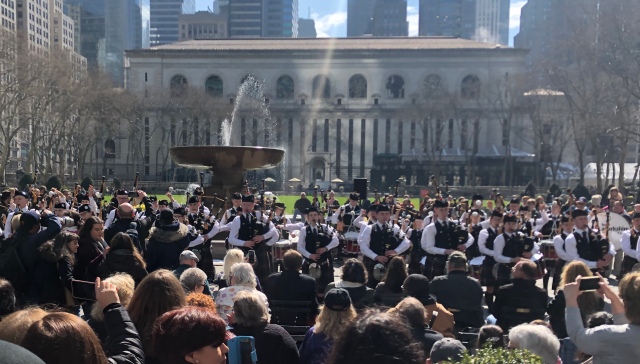 From there we legged it down to Chelse for a visit to Milk Bar, a celebrity-chef-rum hole in the wall that serves ice cream that tastes like the milk left in the bottom of your bowl after eating cornflakes. 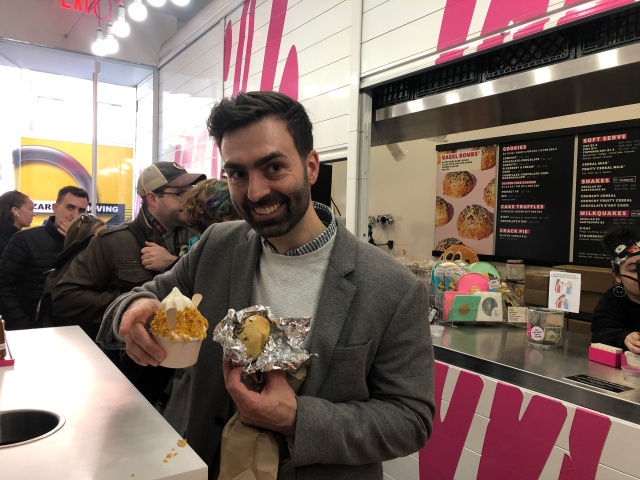 We strolled a couple blocks, ate another mini-breakfast, and then climbed up to the Highline (a park planted in a raised railway that runs through town). It was my first time on the Highline and I loved it despite the thronging crowds.

The Highline ended at the newly opened Hudson Yards with its high-gloss luxury shops and fascinating beehive-looking staircase to nowhere. 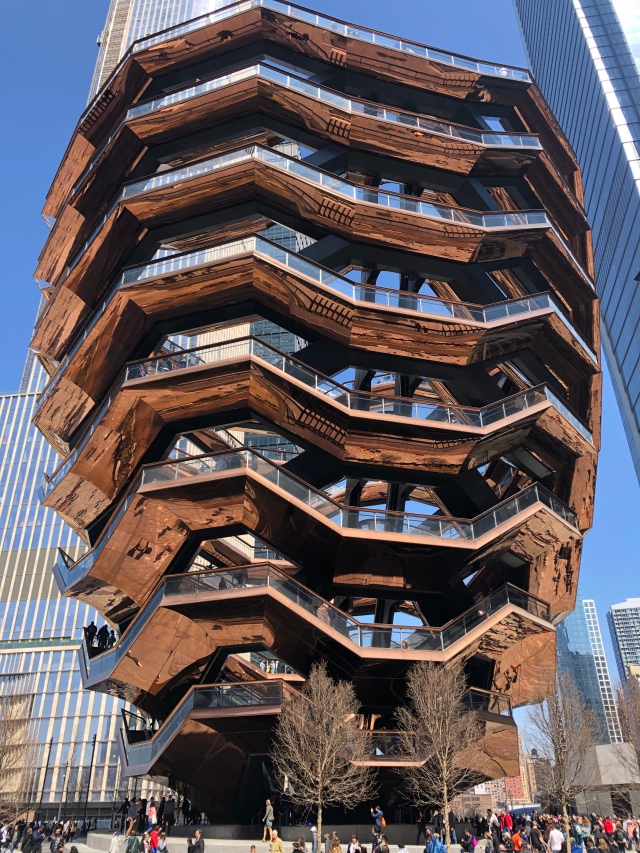 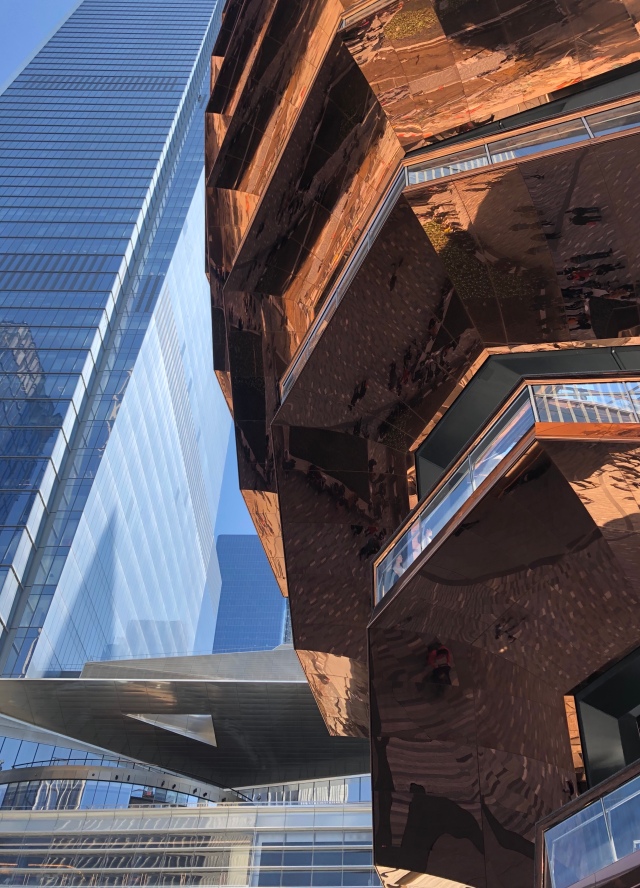 By then it was time to head back to midtown for a matinee performance of a Dear Evan Hansen. 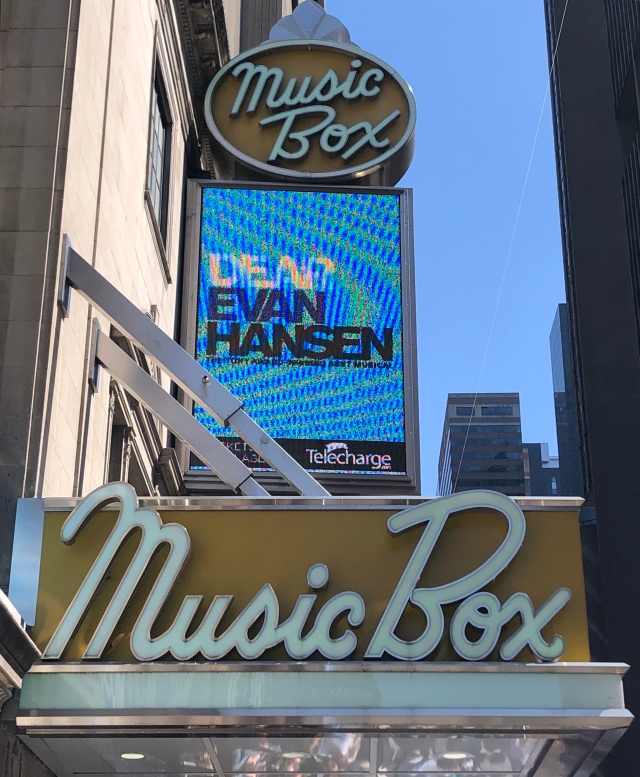 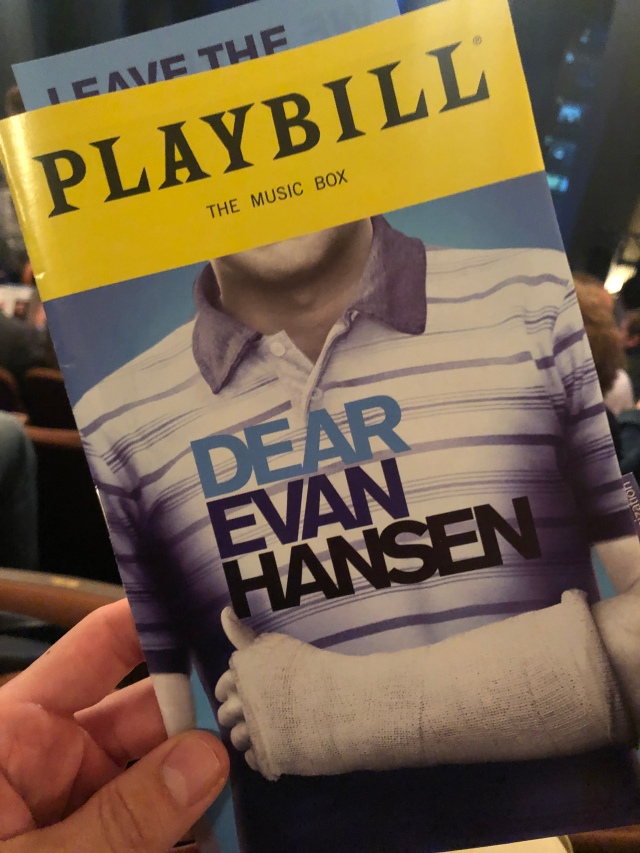 It’s a show about two misfit teenagers, one of whom commits suicide and the other tragically finds himself caught up in a misguided web of lies, fantasy, and very human desire to connect and feel loved. It was intelligent but less emotionally moving than I expected, or at least in the way I expected. The cognitive dissonance of the first half, full as it was of anthems as beautiful and hollow as Instagram posts, made me uneasy and a bit sad. The mother’s song near then end, where she admits to imperfection and a fierce unconditional love for her wounded son, was for me the heart of the show.

After the show we walked up Fifth Avenue to the park and then caught a cab to the Czech Embassy in the Upper East Side, next door to which was a traditional Czech restaurant. There we joined an informal dinner for out of town guests at Justin’s friend Eve’s wedding. We mingled and ate the schnitzel and streusel until it was time for bed. Well, a trip to the roof for a view of the Empire State Building, and then bed. 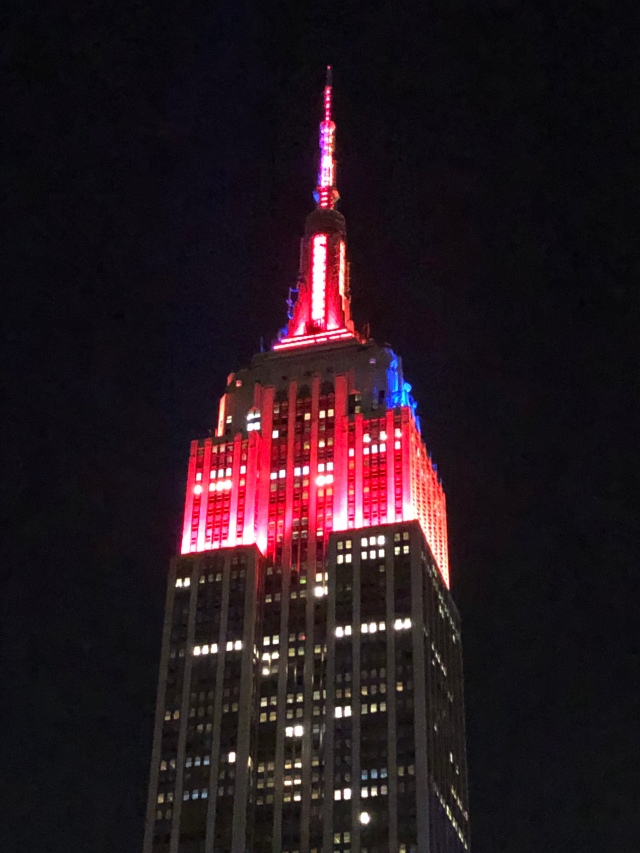 Next morning we rose early, dressed, and found our pay down to The Lighthouse at Chelsea Piers. After welcome refreshments the wedding took place under a flower bedecked huppah in a sun drenched corner overlooking the Hudson, with the Statue of Liberty and New Jersey in the distance.

The thing I love about Jewish weddings, the two I’ve been to now, is the deep sense of tradition, a practical wisdom, and a lack of concern for reverence. There were no hushed, emotional “spiritual” voices, only real people confident that the sacredness inherent in the occasion and the support of the celebrating family was enough for whatever may come.

The ceremony was over in less than thirty minutes but the dancing, dining and toasts went on all afternoon. 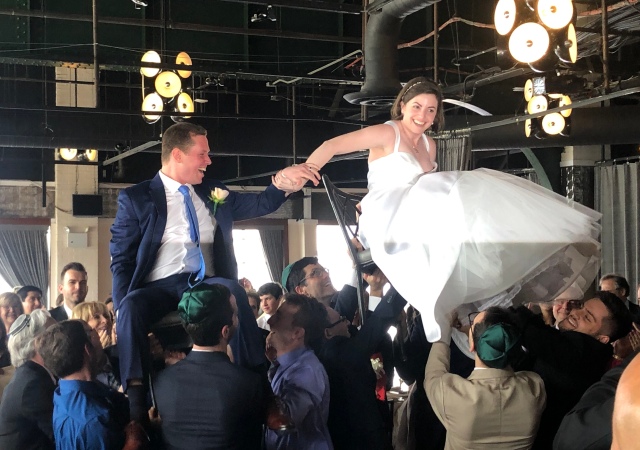 The great thing about a wedding that starts at 11am is that you can have a terrific celebration and still get out in time for another evening on your own. We met our friend Jon to see the new movie Shazam! and then caught up over chicken strips and fries in the New York Times building where I used to work.

Walking back to the hotel, I felt how much I loved the city and how grateful I was for the experiences I’ve had there I’ve the years since I first visited in 2002, and for all the people I’ve shared it with.