Boxing Day at the opera house

The most iconic building in Australia is Sydney’s beautiful opera house. Jutting out into the harbour on a spit of land that had been used for centuries by aboriginal people for song and dance, the opera house is massive, unmissable, and mesmerising — and we had tickets for a guided tour first thing the day after Christmas.

Our guide took us up a flight of back stairs to a sweeping mezzanine foyer with outrageous purple carpet and incredible views of the harbour.

We sat on the steps and watched a short film about the building of the Center. We learned the design had been selected as part of a competition in the late 1950s and completed in the 1979s, was a complete nightmare from an engineering perspective, cost a fortune to build, and is the youngest building ever to have been designated a UNESCO World Heritage Site.

From there we visited symphony hall, where we could take pictures . . .

. . . followed by the opera hall and another smaller performance space where photos were not allowed. Everywhere we went, though, was remarkable for the striking forms and volumes created by the gigantic concrete sails and the glass and wood enclosures.

Interestingly, the architect had originally intended the amphitheater’s to be completely open-air. And while I was grateful for the enclosure that allowed for air conditioning, and could see the value of blocking out a ferry’s foghorn during a symphony, I also would like to have experienced the original vision of the building. It would have been a completely different experience, and I think would have felt quite primal.

Once the tour was finished, we stopped at the opera cafe for lunch. 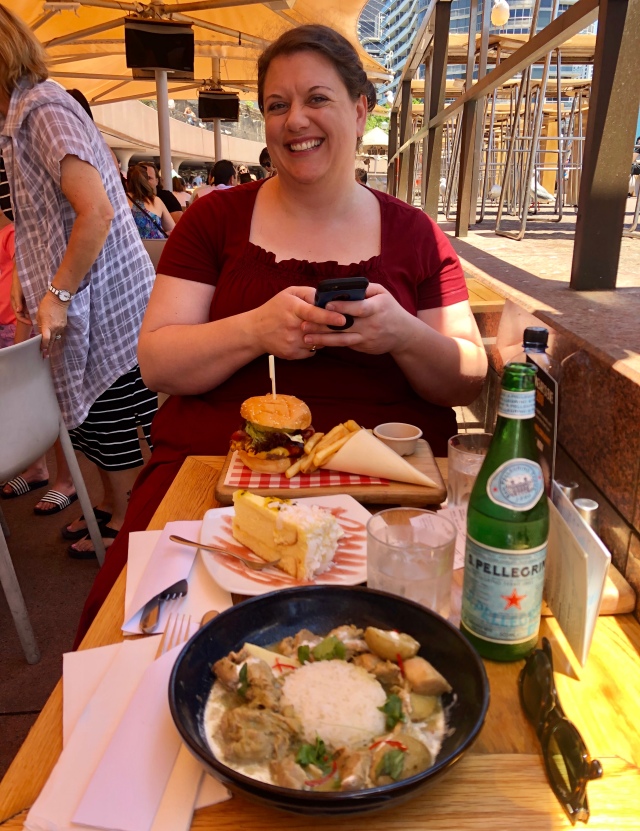 Sadly, lunch was nowhere near as inspiring as the architecture. I had a very mediocre curry that turned out to be laced with small shards of glass that crunched unpleasantly in my teeth. I declined the management’s offer of another helping and instead got a consolatory ice cream cone from the stand down the quay.

We zipped through the Museum of Contemporary Art, which had some nice pieces and a terrific gift shop, before making our way down town for some pre-beach shopping — neither of us had brought beach towels or other beach accoutrements — and we quickly discovered that Boxing Day is a day of sales and chaos. So many people!!

We found what we needed, dropped the merchandise at the flat, and came back to the opera house for an evening performance.

This was, alas, no grand opera but a “greatest hits” medley of arias sung by singers who were earnest and eager to please but not quite top tier in terms of technique and artistry. Still, it was our only chance to see s performance in this famous hall, and once we had adjusted our expectations, it was a fun and lighthearted way to spend an evening.

← And then the giant bats came out…
Seeing the sights →
Follow A More Gentlemanlike Manner on WordPress.com