Sunday in Berlin, in three parts

Grit decided to go for a run, so I had exactly 90 minutes after breakfast to stroll leisurely from my hotel to the Gendarmenmarkt . . .

. . . across a plaza bordered by some neoclassical buildings the color, and in one case the shape, of Easter eggs . . .

. . . in front of a sooty old church with a Soviet prestige spike in the background . . . 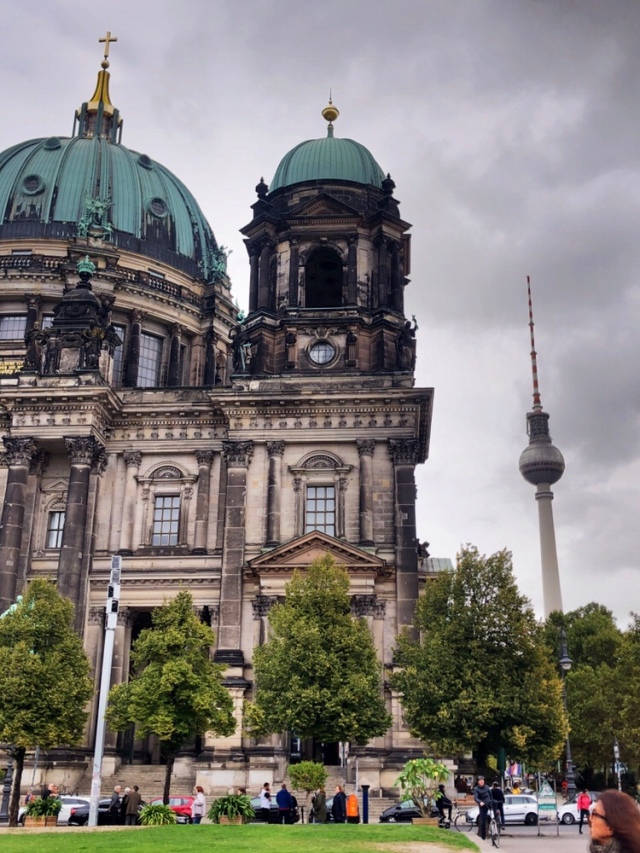 . . . until I finally arrived at the famous Museum Isle of Berlin.  The famous Pergamon, with its Greek marbles, already had a line that was longer than I was willing to wait, so I purchased a ticket for the Neues Museum, which is where I really wanted to go anyway . . .

. . . because Egypt.  Oh my, do they have Egypt.  Makes the Louvre’s collection look like a joke.  Not quite so large as the Met Museum in New York, but full of exquisite pieces beautifully displayed. 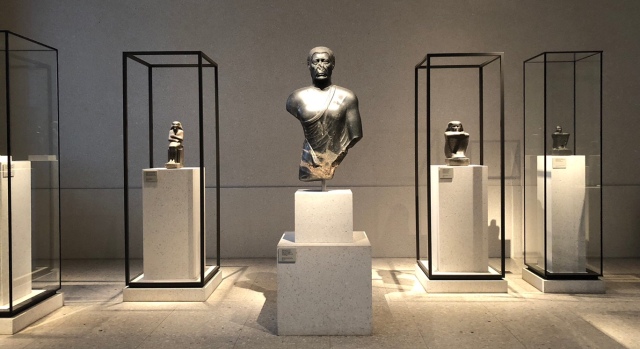 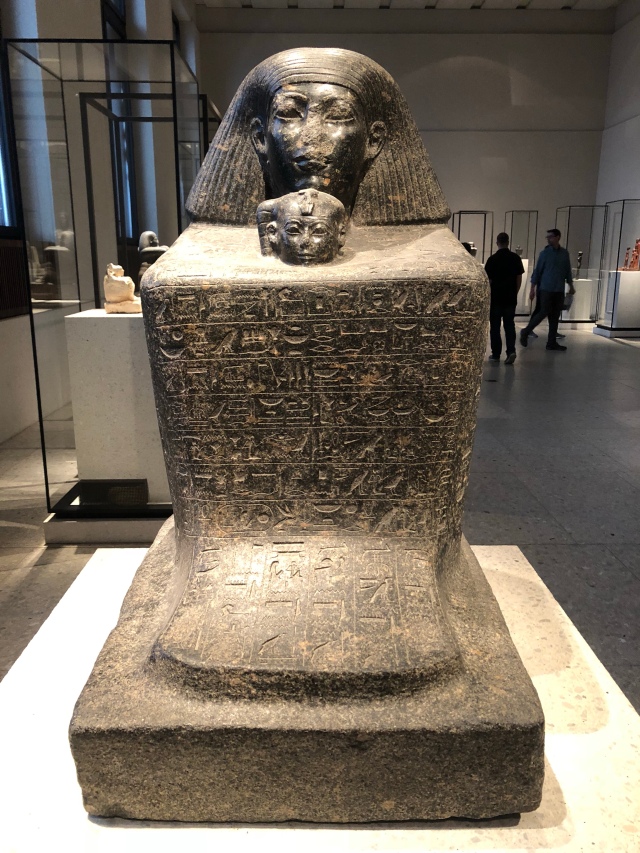 And let’s be honest, when you have Nefertiti, you’ve kind of won at Egypt.  I had seen her before, in 2003, when she was still in (what I remember as) a dark corner of a dowdy little museum in a different part of town.  Now, she’s mounted on a pedestal in a grandly domed room of her own that is well off limits to photography. 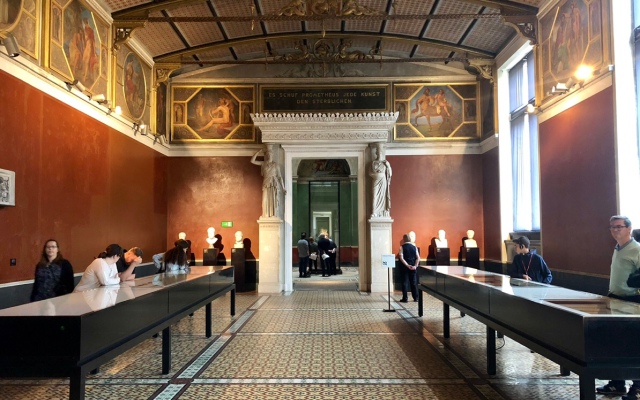 Sigh.  She’s just so lovely.  The thing that struck me most, which I had completely forgotten, was just how finely and realistically sculpted she is.  Unlike much of ancient Egyptian statuary which, at least until the Greeks arrived in the 300s BC, was fairly stylized and non-individual, the Nefertiti bust (from 1345) looks like a real, individual woman.  Of rare beauty, to be sure, but still blessed with the fine wrinkles and faint under-eye circles that so many of us see on our own faces.

I didn’t mind the ban on cameras.  I’ve got a photo somewhere from my 2003 visit.  This time I just stood there and memorized the details.

And then moved on, because my 90 minutes was drawing to a close.  Having finished Egypt, I ran down to Troy (because of course the Germans also have Troy) and relished the pottery.  Some of it looked like what you’d expect . . . 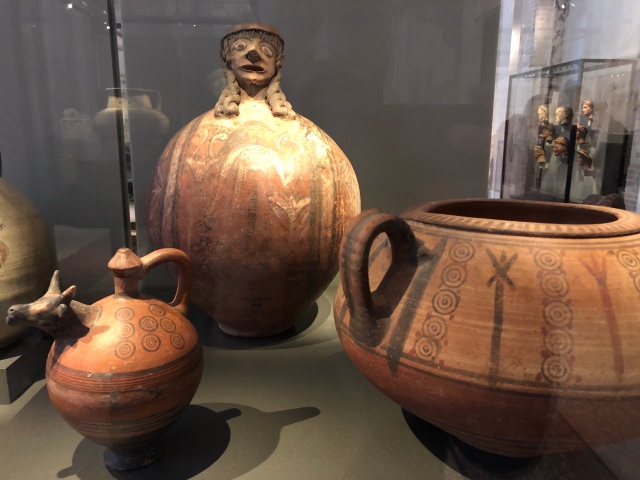 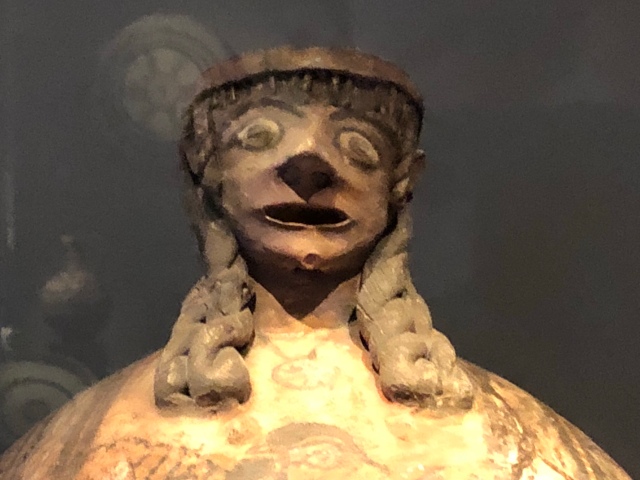 . . . or faces hanging from a carriage in a way that makes you think they might actually be decapitated and therefore not perhaps so cheerful as their smiles and the flowery horse might suggest.

Lunch!  Grit was finished with her run and we had plans to see a little exhibition about “Coolness”, but I was feeling hungry so we met for lunch.

Well, maybe technically brunch.  You know, something light to hold me over.

Then Quynh-Nhu decided she would abandon her husband, child, and medical studies to meet us at the cafe.  By then it was pouring rain, so we moved inside. 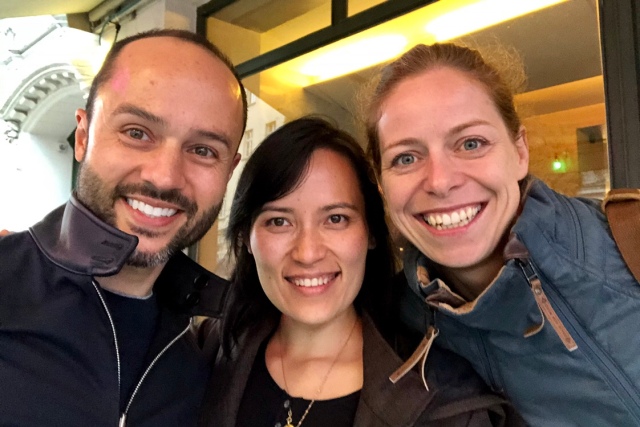 Five hours of uninterrupted conversation (plus an additional round of omelettes and hot chocolates) later, just as we were ramping up on the theory of linguistic identity and whether language somehow determines the thoughts we’re able to think, we realized that we really ought to pause the conversation there if we wanted to see the Coolness exhibit before it closed.

It was a well done exhibit that traced the concept of “cool” from its origins in the American Civil Rights era to African American jazz (think Miles Davis) to white mainstream (think Elvis and James Dean) to 1980s rock and popstars (think the Rolling Stones, David Bowie and Madonna) to the current incarnation of “cool” as a commodity (think Air Jordans). 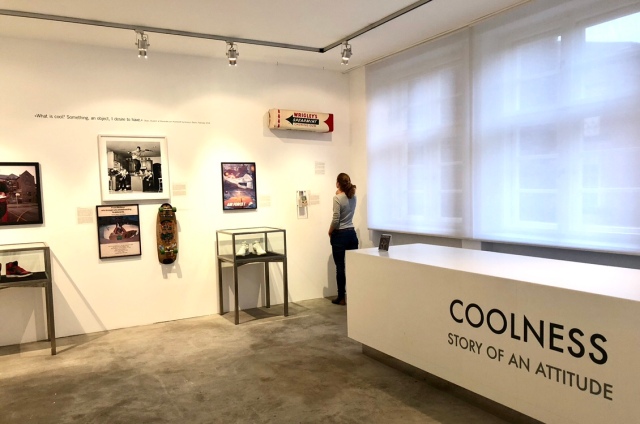 Twenty minutes later, the museum closed and we headed across town to the “Down Under Berlin” film festival for a screening of seven short films from New Zealand.

The concept of an Aussie/Kiwi film festival ended up being cooler than the actual experience of it–or at least of the seven shorts we saw, which were pretty mediocre.

And that brought us to the end of the day.  I hugged Grit goodbye, we promised to meet up again for hiking in Scotland, and then I went to Munich.