Around the city walls

York is encircled by the most complete set of medieval city walls in England. It’s about three miles around and the guidebooks say it should take about two hours to finish. I took all day.

I hadn’t really intended to. I set out around 9:30 after a quick breakfast and intended to finish the tour quickly and move on to other activities.

…and across from the so-called Kings Manor which had actually been part of a significant abbey until Henry VIII broke with Rome and abolished the abbeys. When the Yorkshire folks wanted to hang on to their “popish” ways, the king came up and stayed here for a few days with a thousand soldiers to show he meant business.

Then up the stairs and onto the walls! 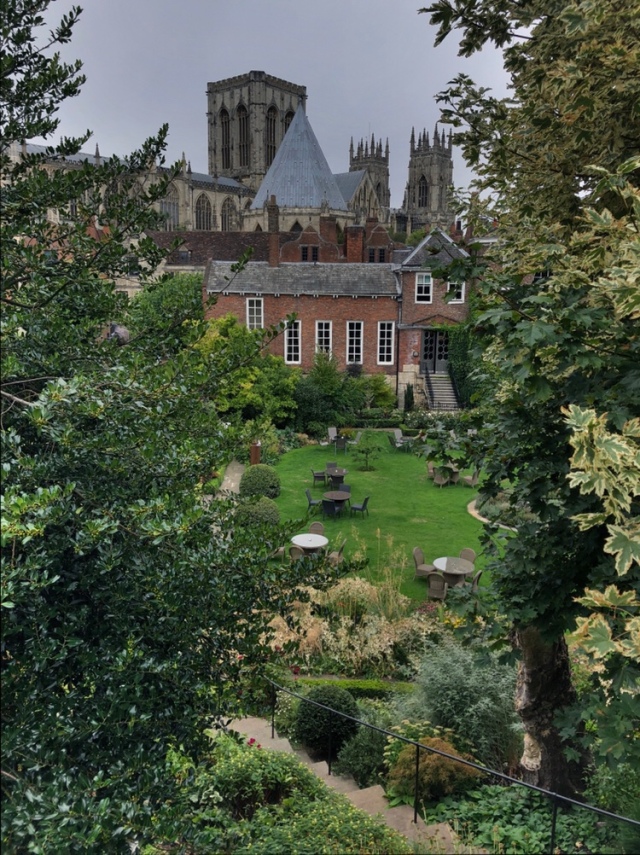 Periodically I came to other gates with their towers and stories. The wall typically forced me down at this point and I took the opportunity to wander for a minute in that part of town.

Eventually some construction forced me to leave the walls altogether, which gave me a good view of the wall-plus-embankment structure…

…but then left me to pick out my way through an unmarked detour. I figured I’d just follow the river…

…which wasn’t actually the right path. I scrambled through some less picturesque parts of town and finally got my bearings when I landed in the yard if the 13th Century headquarters of the Merchant Adventurers.

By this point I part of me really just wanted to go into the cafe and eat something warm away from the rain, but the other part of me (the part that is five years old and frankly needed the snack) was determined to Finish The Thing and kicked into death march mode.

So I made my way back to the wall and saw another gate, this time with a fancy Barbican that is supposed to be the only intact one left in the U.K….

…followed by the last standing tower of the York castle that was first built by William the Conqueror when he was “harrowing the North”, and then in the 12th Century was the site of a mass suicide of 150 Jewish people who took refuge there after being driven from their homes by an anti Semitic mob only to find that the government sided with the mob and so decided it was better to kill themselves than to be miseries or forced to renounce their faith.

And on that lovely note the reasonable part of me got the upper hand and said it was time for lunch whether the wall walk was done or not. So I found a a Michelin-listed spot literally through a hole in the wall, and sat down for a glorious Sunday roast while the rain poured down.

Feeling much better with some food in my belly, I attempted to do some antique shopping and was sorely disappointed with the shops I found. So I went back to the gallery I found yesterday and got a bit of art before heading back to the hotel for a gorgeous Sunday afternoon nap.

When I woke up I had every intention of getting online and taking care of “real life” for a couple of hours. During the work week my hours are such that it’s hard to actually get non-work things done, and if I think of these weekends away as holidays then I really never get anything done and it all just piles up. But alas my plans to be productive and responsible were foiled by a terrible internet connection.

This hotel may be charming, but it felt like we were back on a dial up modem. Every time a page would load I’d lose the connection and I’d have to rest everything and reconnect. I quickly found my post-lunch/post-nap positivity draining away, so I put it all away and went back out to finish the wall walk. It was still drizzly, but I was more inclined to embrace it now.

I finally made it to the Micklegate, which is where the monarch enters on state visits and political prisoners have their heads spiked after execution. 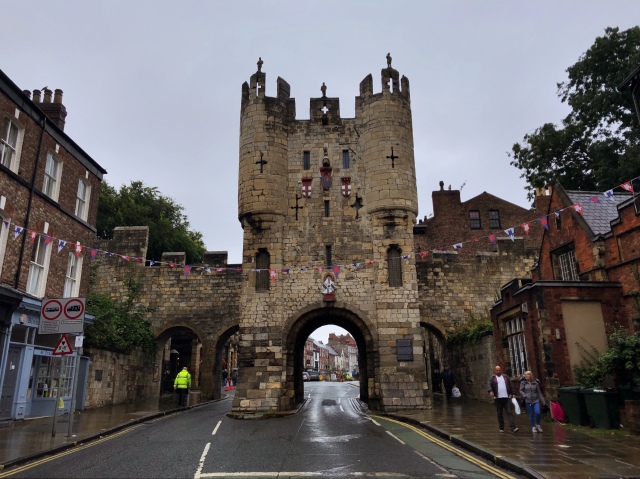 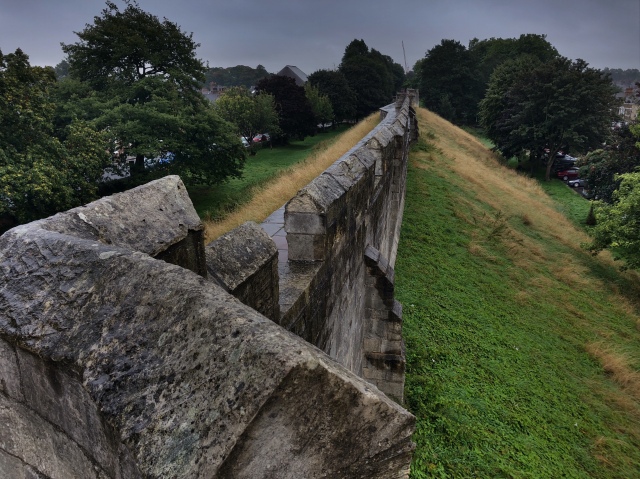 Until I got back to the castle hill and could say I had walked he full circumference. Woo.

Interestingly I noticed this time a strange little Shakespearean affair on the Lee side of the hill. Had it been sunny and warm the idea of seeing A Midsummer Nights Dream in a rough approximation of the Globe theatre weight have been appealing. As it was, however, I decided to pass.

Instead, I remembered seeing an artsy little cinema tucked behind some ancient church by the river. They had listed a 19:15 screening of Mamma Mia 2, and that seemed like a perfect way to end the day.

I set out across town, grabbing a quick bite along the way, and passing through a passed through a delightful bit of everyday magic when I came to a street inexplicably full of bubbles and gleeful children… 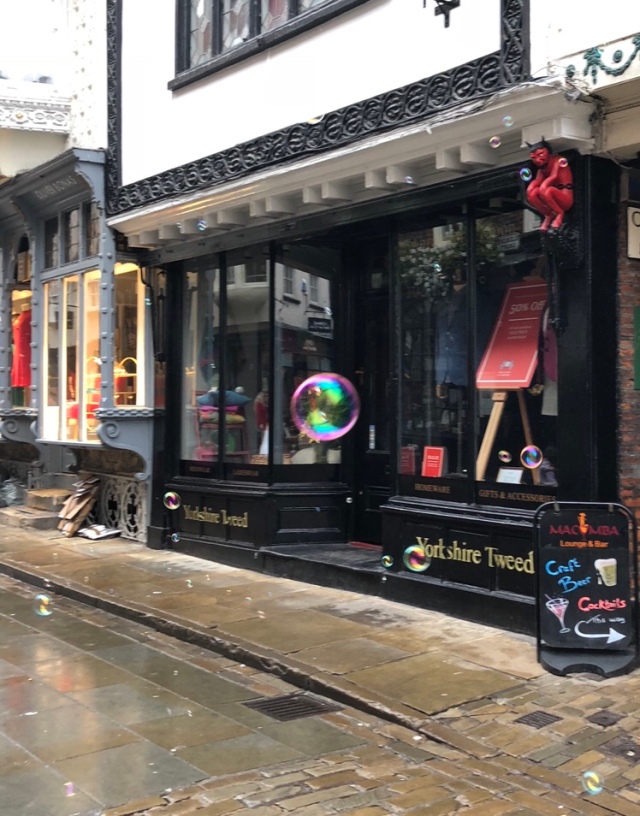 …and then settled down into the cinema for a couple hours of escapist silliness full of beautiful people in beautiful places with great interior decorating, ABBA, and Cher–what wasn’t to love?!

I now want to move to Greece and open a hotel.