Temple of Horus at Edfu

Our first stop up the river was the Temple of Horus at Edfu.  We arrived sometime during the night and took a horse buggy into town to see the temple. 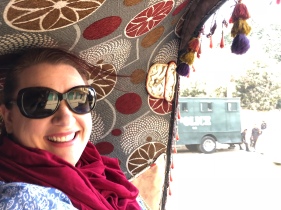 The temple here is the best preserved of all the temples we saw.  Aside from the early Christians’ attempts to deface the “pagan idols” the temple was virtually intact thanks to centuries of being buried in sand and largely forgotten. 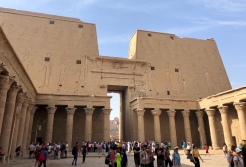 The first thing I noticed as we approached the temple was the columns — these were not the Egyptian columns we had seen at Karnak!  And sure enough, our guide soon explained that this temple had been built by the Ptolemies, who were Greek (installed by Alexander the Great) and who had introduced certain elements of Greek art and architecture into Egypt.

We also learned how to tell the difference between Isis (one of the major goddesses, wife of Osiris and mother of Horus) and Hathor (the goddess of fertility often represented by a cow).  They’re often nearly indistinguishable, both having the same female figure and crown of horns with a sun disc, but Isis will also have a throne on top of the sun disc.  Details, details!

Because the temple is dedicated to Horus, there is a large series of reliefs depicting Horus’s triumph over the evil god Seti, who killed his father Osiris.  Seti is dedicated as a hippopotamus.  Horus is shown on a boat going through the land killing hippos (the tiny figure beneath the boat).  Unfortunately none of them are Seti until Isis comes down and shows him which hippo is Seti (she’s the crouching female figure in the boat).  Then Horus is able to conquer Seti (shown by standing on him).  (Btw, all the faces and feed were scratched out by the Christians who didn’t like the pagan gods.) 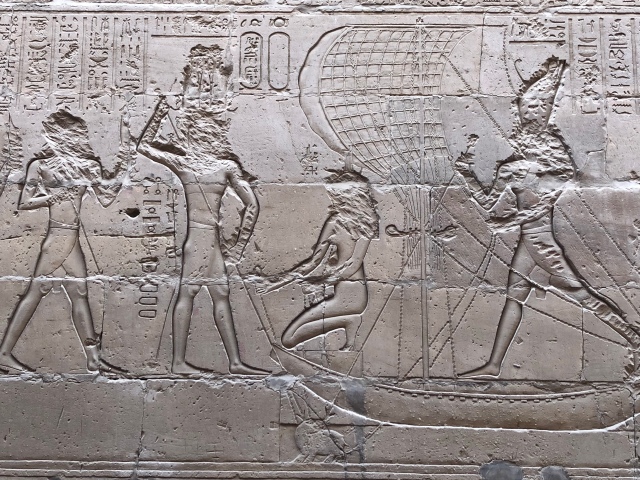 When we had seen everything we went back to the horse buggies and attempted to find ours among the crowd.  It was complete chaos as the buggies were madly racing to get all the tourists back to their boats before sailing time.  Naturally ours was nowhere to be found and our poor guide very distraught until finally the guy showed up again smiling with thumbs up saying “all is good?!” and then racing us back to the boat.

← Cruising up the Nile
Temple at Kom Ombo →
Follow A More Gentlemanlike Manner on WordPress.com