March 21, 2015 · by JJD · in Food, Friends, Nature, Theatre, Travel · 1 Comment
A couple weeks before this trip, Justin and I had the following conversation:

JDK:  How are you when you travel?

JDK:  Okay, so what does that mean?

JJD:  [gleefully] Well, for one thing, it means that I’m going to be okay with sitting on the beach for approximately one day.  And then I’m going to want to get up at the crack of dawn to go bird-and-whale-watching, snorkeling, kayaking, paddle-boarding and cave-swimming, and then come back in time to grab dinner and see a play.  All in the same day.  Doesn’t that sound awesome to you?

Because this whole “travel with people you hardly know” thing goes both ways:  Sure, I didn’t really know what I was getting into when I signed up to go to Mexico with a bunch of guys I didn’t know.  But did those poor souls have any idea what they were getting into when they agreed to have me along?  Ha!  Lucky them!
Fortunately, Justin was totally game for an adventure.  We did the planning legwork, and invited the others to join us.  They all made the right choice, which meant that early on Friday morning (some of them brightly sunburned from the day before), we squeezed into Randall’s little rental car . . .

. . . and drove over to the Maritime Marina in search of the Vallarta Adventures office.  I had found Vallarta Adventures through Tripadvisor.  They’re by far the highest rated tour agency in Puerto Vallarta, and we’d signed up for their Marietas Eco Discover Tour.

The line for departures was easy to find.  It was the one next to the giant sea lion that was posing for photos.

After that endearing encounter with Nature, we collected our tickets and found the boat that would be our home for the rest of the day. 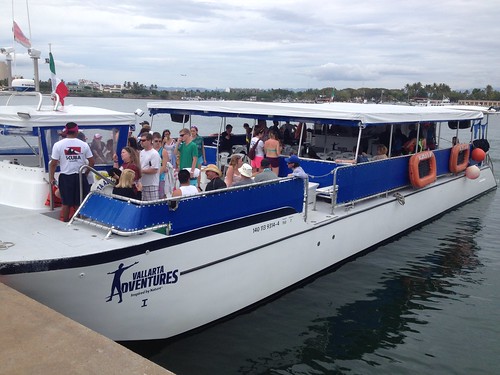 We were one of the last ones to board, which was totally a good thing because it meant we got to sit out on the deck instead of under the awning.  We had plenty of room for group photos . . .

. . . even though the breeze was chilly enough that some of us broke out our jackets. 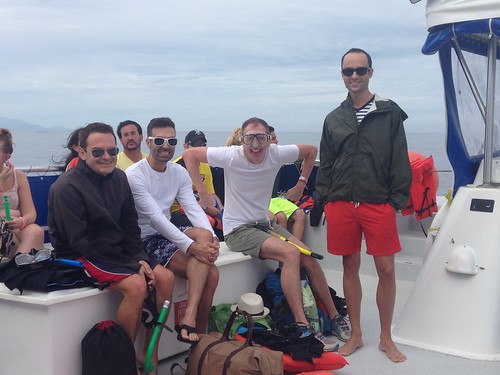 The islands were about two hours away, but the crew did a good job helping the time pass quickly.  There was a breakfast buffet when we arrived, and when that was cleaned up, the crew came out and started busting out some dance moves.  They were all super entertaining, but this guy’s break-dance moves were by far the biggest crowd-pleaser . . . .

Jed and Justin had both been on the BYU folk dance team in college, so Randall had the great idea of telling the captain that Justin was a dancer and should be invited to give a little solo performance, as well.  The captain delightedly obliged and Justin, who had been minding his own business in the back of the audience, suddenly found himself in the spotlight.  Mortified but still a good sport, he got down with his bad self . . . .

Eventually the Marietas Islands came into view.  They were a collection of rocky mounds rising out of the water.

The islands are protected as a bird refuge, so there were no people on them, and we didn’t land.  We did, however, do a tour of one of them to appreciate the rocky formations, appreciate the vast quantities of bird poo that essentially whitewashed the cliffs, and watch the hundreds of birds that perched there and produced said poo.  We also saw a dolphin and a giant sea turtle, but the sightings were to fleeting to get any good photos; sadly, there were no whales. 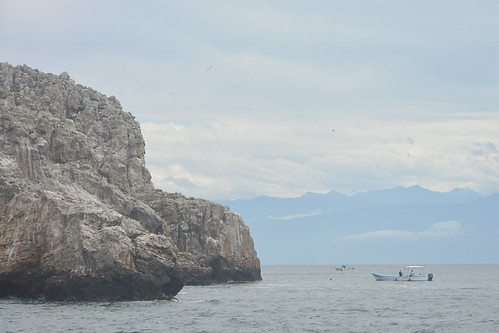 Along the way to the islands, the crew had handed out wetsuits and snorkel gear.  We suited up and, once we were within range of the islands, jumped into the water to explore.  The water was chilly and not super clear, and there really weren’t that many fish.  We saw a handful of brightly colored angelfish and others that I didn’t recognize, but otherwise it was just a lot of rocks.  Definitely nothing like what I saw in the reefs off the coast of Belize.  Still, snorkeling is fun, and the wetsuits kept the chill at bay. 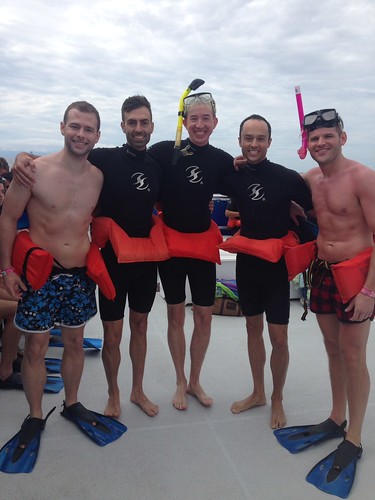 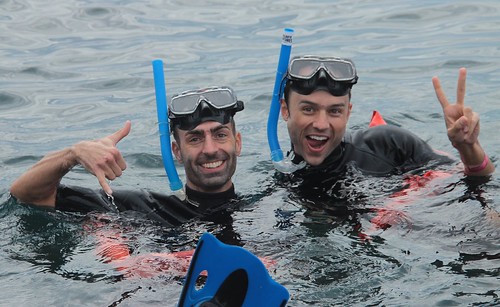 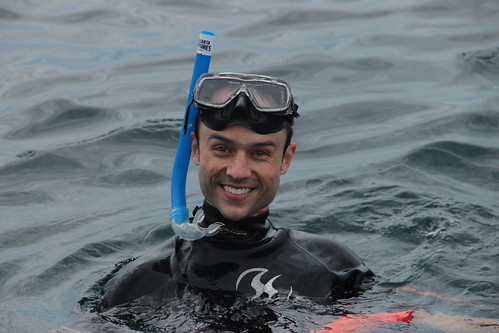 Once we tired of snorkeling, we headed back to the boat and Justin and I exchanged our flippers for a kayak and paddles; others opted for paddle boards.  We cruised around the islands for a while, sometimes harassing our friends on the paddle boards, sometimes racing the crew-members who were trying to keep people away from the rocks.

After everyone on the boat had had a chance to kayak and/or paddleboard, the crew gathered all the people and gear back on board and took us to a neighboring island.

Pretty soon we pulled up to the mouth of a little inlet where we could see a bunch of heads and life jackets bobbing in the waves.

“See that cave?” asked the captain.  “That’s the gate to a magical hidden beach, and you can only get there by swimming.  So, all our strong swimmers, off you go!  Just be back here in about half an hour or we’ll leave you here to live with the birds.”

So back into the water we went.  We had our wetsuits, flippers and life preservers, and it’s a good thing, too.  The water was just as chilly as before, the distance much longer, and the currents stronger (all that sucking through the tunnel).  I quickly discovered that swimming forward is quite a workout for the hamstrings!  Within minutes mine were pretty much shot.  Fortunately, all I had to do was turn over on my back and backstroke it the rest of the way.  I couldn’t see where I was going, but at least my legs weren’t on fire (and I only ran over one person). 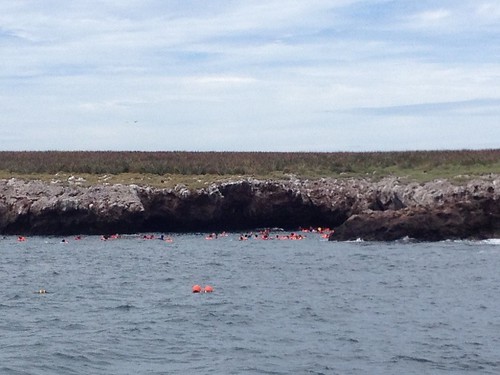 The hidden beach really was amazing.  It was like something you’d see in a movie — a perfect circle of cliffs surrounding a beautiful white sand beach.  If there hadn’t been so many other people, it would have been a perfect little paradise.

But of course there were tons of people, so the only thing to do was strip off our wetsuits and pose for photos.  The photographers from the boat had come onshore with us, so they put us through the paces:

And on that note, they ordered us back into our wetsuits and into the water.  Time to head back to the mainland!

We got back to the boat and discovered that lunch had been set up:  Sandwiches, various salads, some chips with delicious salsa.  We peeled out of our wetsuits and loaded up our plates.  Fortunately by this time the sun had broken out, so we broke out the hats and sunglasses and got some sun on the deck. 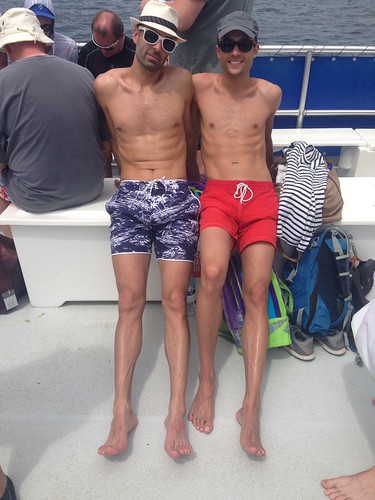 Next thing we knew, a dance party had broken out all around us!  Lunch and a few beers will do that to people.  Of course none of the Mormon boys were drinking, but that didn’t stop us from joining in. 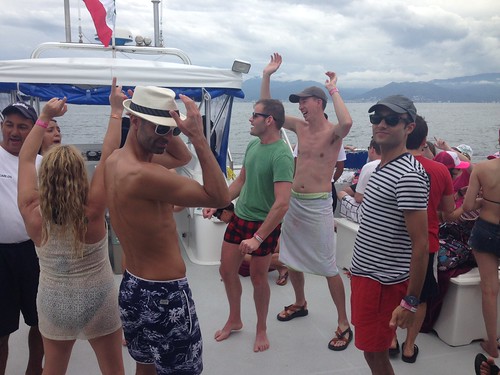 Before long we were back on solid ground and the masses began to disperse — but not before we snagged one of them to take a picture of our post-adventure crew. 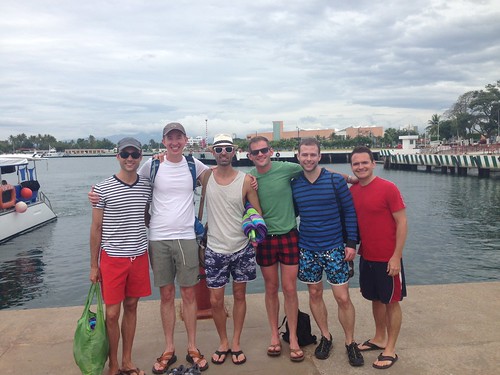 Of course, that was only the first part of the day — we still had so much left to do!  First, showers and a fresh change of clothes at the condo.  Then off to Pancho’s for another round of tacos.

After dinner we walked over to the Palm Cabaret to see the local production of Greater Tuna, a two-man play that satirizes small-town life in Texas.

It was a decent production, certainly better than I’d expected in a little Mexican resort town.  The energy flagged a couple of times, particularly in the second act, which takes a decidedly darker turn than the first act, and I missed some of the outrageous characterizations that I’ve seen in productions in the US.  But still it was fun to see the play and to watch the reactions of people who were seeing it for the first time.  There’s something special about seeing a piece of American culture in a foreign context that gives a different perspective.  I would have loved to hear what the non-Americans in the audience (or even the Mexican tech team) thought about it.  (Unfortunately, the others in the group didn’t share my enthusiasm.  I’m pretty sure they all hated it!  Apparently some of them were hoping for more of a traditional narrative arc and more of a feel-good ending.  Oh well.  At least they all liked the Marietas tour, so the day was still an overall success.)