June 24, 2014 · by JJD · in Architecture, Nature, Travel · 1 Comment
According to our guide books, Seoul has a couple of palaces that are really worth visiting.  We had originally planned to devote today to visiting two of them . . . but then we spent half the morning blogging about yesterday’s activities and then having another multi-pastry breakfast at the Paris Baguette Cafe down the street.  While breakfasting, we discovered that (1) the principal palace was closed on Tuesdays, and (2) the Changdeok Palace’s famous Huwon Garden could only be visited as part of a guided tour, and the last English-language tour was leaving sooner than we could walk there.   So much for planning things on the fly!
We decided to make a run for the garden tour (by all accounts it was a “must do”), so we snarfed the last of our pastries and kiwi milkshakes and hurried to the nearest taxi stand.  At this point we learned a valuable lesson about guide books:  Amanda and I have both used the Lonely Planet guide books for years, but we always wonder if others would be better.  This time Amanda got the Lonely Planet for Seoul, and I got the green Michelin guide (different from the red Michelin guide).  So far the Michelin has sadly underperformed in pretty much every way, while the Lonely Planet has lived up to the brand’s solid reputation.  But when we got into the taxi and proceeded to murder the pronunciation of the palace’s name and then handed the Lonely Planet to the driver with plenty of (un?)helpful gestures, all we got was a blank stare.  I pulled out the Michelin on the theory that our driver might be able to understand a different set of English words, only to discover that, lo and behold, Michelin had thought to print place names and addresses in Korean as well as English.  Of course the letters were tiny enough that our cabby literally had to pull out a magnifying glass from the glove compartment in order to read it, but read it he did — and with a little grunt of understanding he set off through the city.  (Take note, Lonely Planet. I expect more Korean-language listings in the next edition!)
Anyway, we got to the Changdeok Palace without further ado and purchased our tickets for the garden tour.  Thanks to our speedy cabby, we still had about 40 minutes before we needed to be at the rendez-vous point for the garden tour, so that gave us time to explore the building complex of the palace.
The Changdeok Palace was built in 1405 as a secondary palace for the king.  According to the signs, this was necessary to bring balance to the city — now there was a palace on the west and a palace on the east.  I could just imagine how well this went over with the common people:
King: [to the people]  I need to raise taxes and force you labor in building a fancy new palace.
People: [to the king] Boo!
King:  People, believe me, I don’t want a new palace — I need a new palace to balance out the fact that I’ve already got another one on the other side of town.  It’ll be a win for everyone!
People:  Oh, well, that makes perfect sense.  Here’s our money and labor!”
In any event, the palace was built and is now a prime example of the Korean design principles harmonizing nature, geographical positioning (mountain in back, river in front), and the manmade palace and gardens. Over the centuries, portions of it were destroyed and rebuilt. It became a UNESCO World Heritage site in 1997. 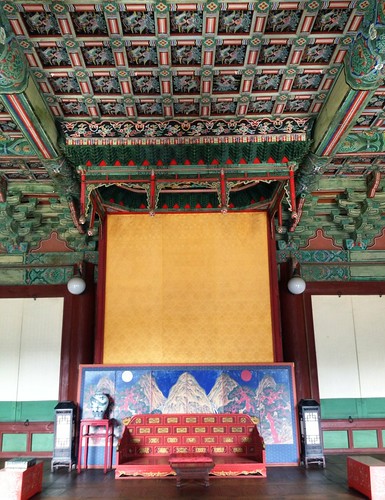 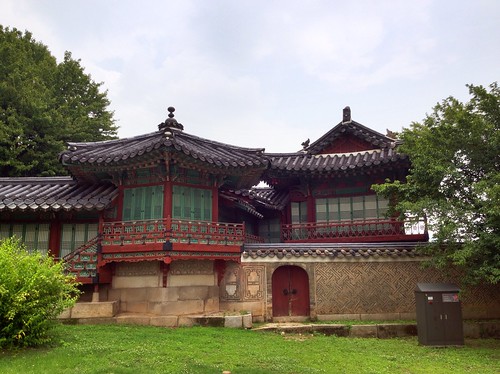 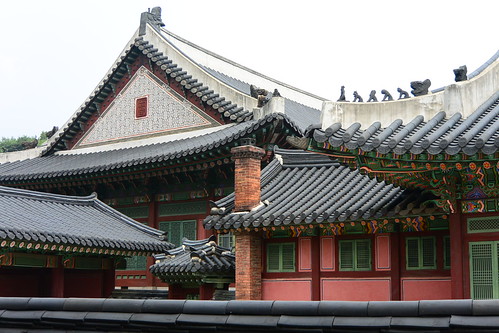 The real draw of the Changdeok Palace is the Huwon (a.k.a. Secret) Garden. Spreading out behind the palace in the middle of Seoul, the garden is a vast, unspoiled park consisting of woodlands, water features and tastefully placed pavilions where the royal family would retire for poetry-writing parties, archery and sailing wine-glasses down the stream (because apparently that’s a thing). Given how highly the garden was praised, I came in expecting something spectacular — on the order, maybe, of Versailles or something — but our guide quickly advised us to set our expectations lower. And she was right. The garden was indeed lovely, but in a natural, understated sort of way. 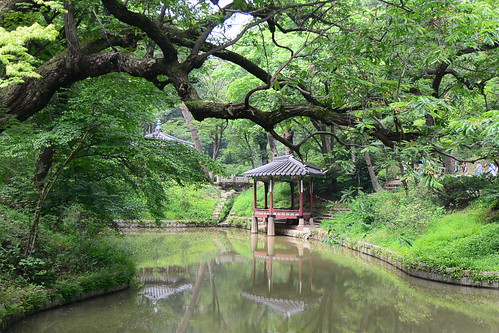 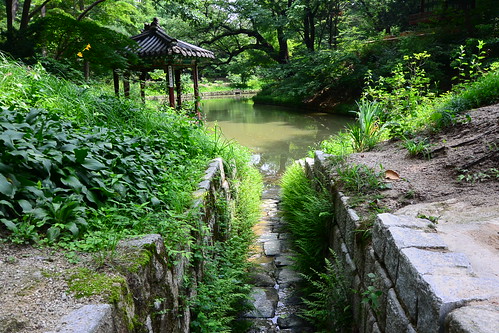 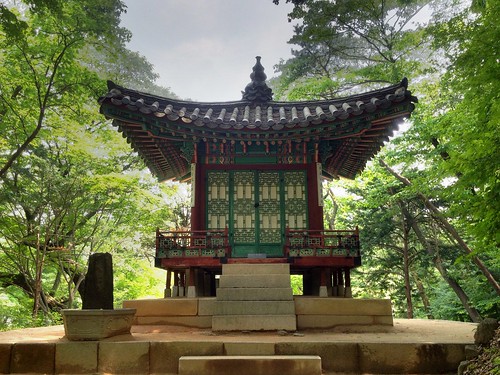