January 23, 2014 · by JJD · in Theatre, Trials and Tribulations · 3 Comments
Tonight I managed to duck out of the office early enough to see Signature Theatre’s current production Gypsy with my friend Melanie.  I’d never seen the show before and this production has gotten great reviews (and accordingly is sold out most nights), so I was excited when I managed to snag the tickets.

It’s essentially the story of the mother of all stage mothers, an indomitable woman of ferocious energy and vitality who pours all of herself into pushing — driving — her daughters towards stardom during the waning years of Vaudeville.  She doesn’t quite succeed the way she imagines.  The pretty, talented daughter elopes young and is never heard from again; the other daughter, so often relegated to the background, then becomes the object of her mother’s ambition.  She hasn’t the talent for real performance, but ultimately achieves a sort of stardom when she discovers striptease (the character is loosely based on the real-life striptease Gypsy Rose Lee).

Momma Rose is a fascinating character; a force of nature in the same vein as Scarlett O’Hara only with her energies channeled into her daughters instead of herself.  She’s charismatic and oppressive and, when she finally opens up and lets herself shine in the song “Rose’s Turn”, magnificent.  (That song has got to be one of the hardest to perform well in all of musicaldom.  It was as thrilling a physical feat as any prize-winning gymnastics routine might be.)

Now, if only that were the end of my story!

But no.  Part deux of this evening’s adventure kicked off in the parking terrace.  I’d offered to give Melanie a ride to the nearest metro station only to discover that my car was nowhere to be found.  Vanished without a trace from the parking terrace.  The only thing to do was call the police to see if the car had been reported as having been towed (I wasn’t so vain as to think anyone in the neighborhood would think to steal an eleven-year-old Kia).

Sure enough, there it was in the tow-truck register.  The policeman gave me the number for the impound lot and I set about tracking it down — which turned out to be a lot less easy than you’d expect.   For one thing, it’s not so fun to be making all these phone calls at 11pm at night when the temperature is around 15 degrees outside and you left your scarf and gloves inside your now-impounded car.  For another thing, the towing company does not make finding your car easy.  This is partially due to physical location.  Towing companies apparently have access to a fourth dimension that is not readily findable by Google maps and Uber drivers.  We followed the directions to a T but found ourselves in a God-forsaken spot next to an underpass near the Pentagon, with no impound lot in sight.

But fourth dimensions aside, the problem was also partly one of personnel.  As you might imagine, a towing company isn’t going to be the place where you find America’s best and brightest (especially working the overnight shift).  For example, when I found myself beneath that underpass and called for further directions, the conversation went something like this:

Me:  Hi, it’s me again, the GPS has led me to this underpass and I’m wondering if you can give me further directions.

Guy:  Mmmkay.  I’m next to the Public Storage building.

Me:  There’s no Public Storage building in sight.  In fact, there’s nothing in sight except the Pentagon and wilderness.  I’m on the edge of the wilderness.

Guy:  I have no idea where that is.

Me:  Well, let’s brainstorm.  How about you give me more info about where you are — can you give me an intersection?

Me:  Thanks.  [Beat]  Umm, I thought we were going for an intersection.

Guy:  I just told you the intersection.

Me:  No, you told me the name of one street.  Intersections, by definition, require at least two streets.

Only it wasn’t, really, because Twelfth and Long Branch apparently don’t ever intersect.  But at least it got us going in the right direction, because after a while we spotted the sign for the Public Storage, which in turn led us to the place where cars go after being impounded. 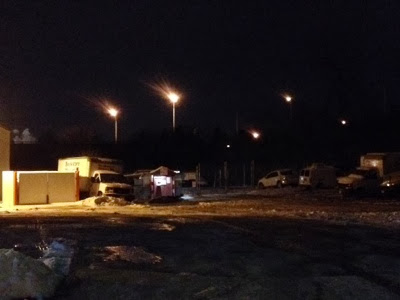 It also looked very much like the place where teenagers in horror movies go to get murdered.  I was fairly confident that I did not live in a horror movie, so I wasn’t too nervous — but I did think it prudent to ask the driver to wait for me while I bought back my car and/or escaped from any crazy people with chainsaws who might be waiting for me in the shack. 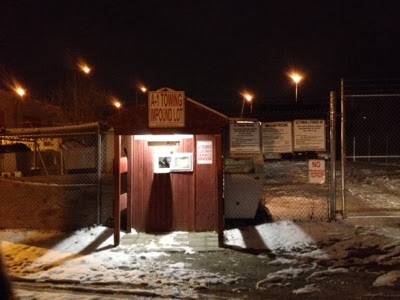 Turns out I was right about not living in a horror movie — no one tried to murder me; all they wanted was my money.  So $150 later, I climbed in my car and drove away, bidding fond farewell to my driver and the poor man who had to spend his nights in the tiny freezing shack giving driving directions to idiots like me who somehow manage to get their cars towed in the first place.