How do you survive a five-and-a-half hour opera?  By eating a hearty breakfast immediately beforehand . . .

and by sneaking a handful of granola bars into the opera house to be eaten during the third intermission. It was odd to be at the opera house at noon.  So much sun!  But I guess that’s the only way you can fit two performances in one day.  By the time we left, it was dark night outside, and definitely dinnertime. 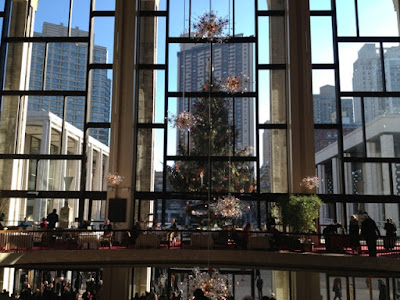 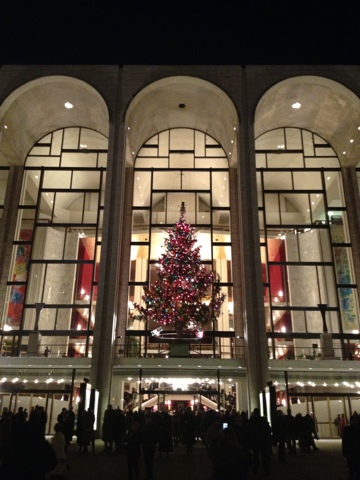 During those intervening hours, while the sun set, I saw one of the grandest of grand operas:  Hector Berlioz’s Les Troyens.  And when I say “grand opera”, I’m not just speaking in superlatives — grand opera is a particular style of opera, tres en vogue in mid-Nineteenth Century Paris.  Basically it requires a massive story, a cast of thousands, an enormous orchestra and dance.  Can’t have a grand opera without a ballet in the middle of it.  Hence the five-and-a-half hour running time.  Hence also the rarity of these sorts of performances — these operas are enormously expensive to ﻿stage.
But, oh, are they grand!  As you might suppose from the title, Les Troyens is the tale of the Trojans, starting with the fall of Troy at the end of the Trojan War (with the Greeks and Helen and that giant horse), continuing through their sojourn in Carthage with Queen Dido, and ending with their departure to found Rome.  It’s basically Virgil’s Aeneid in five acts of singing.
A full summary of the opera can be found here.  But here’s a brief synopsis:
The first two acts are in Troy.  The Greeks have just departed, leaving their horse on the beach.  The Trojans think they’ve won the war and start celebrating while Cassandra freaks out and tells everyone that it’s the end of the world.  Of course, she’s right, and by the end of the second act everyone is dead except for the handful of men who escape with Aeneas.
The last three acts are in Carthage, and they essentially run like a romantic comedy:  Pretty and successful career woman (that’s Dido, the queen) is too focused on building an empire to snag a beau (well, she had one, but he died), so her chubby sister encourages her to open her heart to love.  Then, right on cue, handsome single dad (Aeneas!) shows up, demonstrates both sensitivity (here’s a necklace!) and awesomeness (why don’t I just defeat this invading army for you?), and wins our queen’s heart and soul.  They settle down to wear purple (apparently the color of conjugal bliss) and watch a never-ending ballet.
So far so good, right?  Well, but then a bunch of bloody ghosts show up on their way to MacBeth and remind Aeneas that he’s supposed to go to Italy so that he can found Rome and die young in a glorious hero’s death.  Since that’s clearly a better option than hanging out with a hot queen watching ballet, Aeneas ditches town (but not before singing a really great aria).  Upon seeing his departing ships, Dido kills herself (also after singing a fantastic aria) on top of a burning pile of all the stuff Aeneas left behind.  The end.
Of course, none of that synopsis conveys the magnitude, power and complexity of emotion that this opera takes you through.  Yes, it’s a grand opera in the technical sense of the term, but it’s also grand in every other way.  The music is gorgeous and ranges from stirring and powerful to tender and heartrending.  The singers and orchestra are among the best in the world, and the staging is really well done.  (By comparison, I felt the dancing was a level down in quality, which was my only complaint.)  And for as over-the-top as some of the situations may seem, the opera actually challenges you to engage and reconsider what the right answer is.
For example, suicide.  Is it ever okay to kill yourself?  I’m inclined to say no.  But at the end of the second act, the city of Troy has been sacked by the Greeks and burned to the ground.  The temples have been defiled, many of the women and children raped and killed.  Almost all of the Trojan men are dead, and those who live have abandoned the ruined city and any survivors.  Well, there are survivors — a group of noblewomen and their servants and daughters are hiding in the palace, watching as their men die or abandon them and the Greeks approach.  Rather than submit to rape and enslavement, the women kill themselves in a mass suicide.  It’s appalling and very disturbing, and yet, despite my revolt I couldn’t say that they were wrong to do so.  Better than almost any other art form that I can think of, this operatic moment compellingly captured the moral complexity of this extreme human situation.
Here’s a clip of Dido singing after Aeneas has deserted her.

And here are some still shots from this production that I culled from elsewhere online:

What do you do after sitting in a theatre for 6 hours on a Saturday?  See another show of course!  As soon as the opera was finished, I ran down to Times Square to see what was on offer at the TKTS booth.  There were a handful of shows that I wanted to see — mostly plays rather than musicals — and I opted for the new revival Cat on a Hot Tin Roof.  It’s still in previews, so I had no reviews to judge it by, but the cast is strong (Scarlett Johansson, Ciaran Hinds, Benjamin Walker, Debra Monk), and I wanted to compare the production to the one I saw in 2008 with James Earl Jones, Terrence Howard, Felicia Rashad and Anika Noni Rose.

This production was much better.  Not sure exactly why, but I seemed to get it in a way that I didn’t get the other one.  Possibly because it was easier to hear and understand the actors, possibly because the director had them play more with levels of emotion (the other one just felt like three hours of screaming), and possibly because I really liked the staging (that bedroom felt both claustrophobic and completely exposed).

Anyway, there isn’t a “plot” in the same way as the opera — everything happens in the course of an afternoon/evening, all in a single bedroom.  It’s a mise en scene of a deeply disfunctional and wounded (and wounding) family, and nothing is every wrapped up nicely — there certainly is no happy ending.  But it’s complicated and fascinating and definitely a major piece of American theatre.  And since I’m not going to say more about it, here’s a link to a synopsis.

I was glad I saw it.  I’m curious to see how it fares with the critics and the public when it opens in a couple of weeks.

(One other thing I will say, is that movie stars really must be from a different planet.  Scarlett Johansson and Benjamin Walker both were just gorgeous in a way that nobody I hang out with is — and they’re basically my age, which is alarming.  But they were actually good at acting, too, not just pretty bodies.  So there’s that.)

← New York – No man is an archipelago!
New York – Deja vu all over again →
Follow A More Gentlemanlike Manner on WordPress.com