July 16, 2012 · by JJD · in Travel · Leave a comment
As we emerged from passport control and baggage claim at the Marrakesh airport, we were happy to see a skinny young man holding a sign for Riad Eden.  The new chez nous for the next three days.

Bashir (that was his name) was friendly and assumed I was Spanish (because no one ever thinks I’m American) until I clarified that French or English would be preferable (I mean, I can hold my own in Spanish, but when the other two are an option, that’s the way to go).  He showed us the ATMs, piled us into his minivan, attempted to start the air conditioning but then rolled down the windows and drove us off into the city.  I had shotgun and initially pitied Amanda for having to sit in the back of the van where the windows didn’t open.  But as we picked up speed, so did the breeze.  Let’s just say that 120-degree air coming strong on your face is not fun.  It felt kind of like pointing the hairblower at my eyeballs and keeping it there.

As we entered the town, though, the breeze slowed and with it came the remarkable and exotic scent of a million spices overflowing from the shops lining the streets.  It was amazing and delicious — such a wonderful feeling of not being in Kansas anymore.

We stopped in a bustling circus of an intersection, where Bashir turned us over to a toothless old man, Mohammed, who carted off our luggage in a makeshift wheelbarrow.  He chatted garrulously through the winding streets — I tried to be polite but secretly worried that he was distracting me from catching my bearings for when I’d have to make the walk without his guidance.

Eventually we came to a long narrow street . . .

that turned into a short, narrower street . . .

on one side of which a familiar sign had been placed: 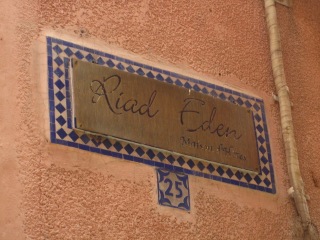 We entered and startled one of the house staff.  She assured us that our room and bed was ready.  Bed?  We need beds — with an “s”.  Ah.  Right.  Tout de suite.  As she took care of that, we got to relax in the air conditioned salon with a giant bottle of water. 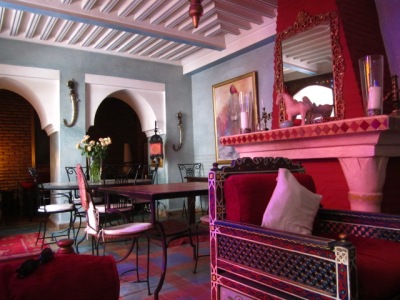 A short time later our friend led us upstairs . . .

to a pinkly tassled set of double doors . . .

and into a room where two twin beds had miraculously appeared in place of the king bed that had been there just moments ago. 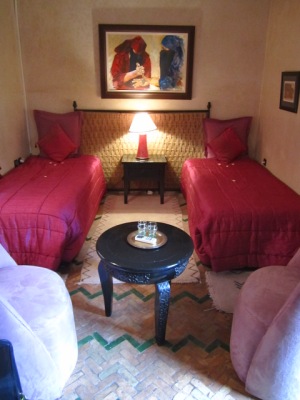