Last night after work I saw the Shakespeare Theatre Company’s staging of Constance Congdon’s adaptation of Carlo Goldoni’s The Servant of Two Masters.  This was part of my season’s subscription, but my friend Amy decided at the last minute to get a ticket as well, so we met for dinner at Le Pain Quotidien before walking over to what turned out to be a perfectly delightful evening of theater. 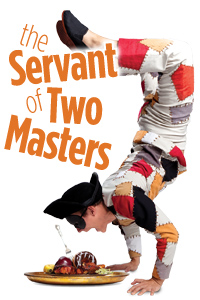 I had heard from Amanda that the play would be fun and in the commedia dell’arte tradition, so I’d expected a farce in the vein of 17th Century French comedies, which are influenced by commedia traditions but are still fully scripted, polished plays.  I suspect, based on the background materials provided by the STC, that that’s what I would have seen had the production conformed to Goloni’s original 18th Century play (apparently Goldoni was accused by critics of killing commedia by insisting that the actors work from scripts and abandoning the masks; others claim he saved it by raising artistic standards).  But this production was based on the 1947 production at the Teatro Piccolo (which was the first to revive the traditional masks and archetypes) and further adapted by Constance Congdon, so that what I saw was full-blown commedia dell’arte, complete with masks, archetypes, virtuosic physicality and outrageous improvisation that made the performance both timeless and universal (thanks to the archetypes) and specific to that very night (thanks to the improv, which drew inspiration from the day’s news, the city, and people in the audience).

It was enormous fun.  The audience guffawed and chuckled in alternation throughout the performance, with the occasional gasp when an improvised joke shocked or went too far.  And you could tell the actors were enjoying themselves immensely.  It was like being in a room of mischievous five-year-olds playing to their heart’s content.  They were all — and especially the fellow playing Truffaldino — extremely good at this.  Only once did one of the actors crack at the antics of his fellow performers, but they were being so funny that it really couldn’t be helped.

The STC also put together some really great articles about commedia and the history of this play.  You might appreciate them, too, especially if you don’t know much about commedia (or are looking for ideas on how to teach it to others who are new to it).