Can you think something is fun but still not like it?  Lady says no, but I think yes.  Think of roller coasters:  they’re fun, but I don’t like them.  Ditto for cotton candy.

Well, that’s my review of the Shakespeare Theatre Company’s production of Two Gentlemen of Verona: A Rock Opera. 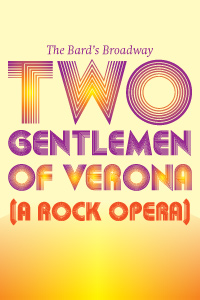 I’m probably supposed to like it:  It’s a musical based on Shakespeare’s play.  The original Broadway production (in 1971) won the Tonys for Best Musical and Best Book.  The Public Theater revived it in 2005 — and I saw that production at the Delacorte Theater in Central Park right after starting law school.

But I just don’t like it.  There are some funny moments, but overall the show feels very 1970s to me:  It’s poppy and brash, heavy with political aspirations (lots of feminist and racial awareness and one cynical Vietnam-era anti-war number).  In the end, it amounts to nothing more substantial than the empty calories of a Sprite.

This production didn’t help itself by being a “concert staging,” meaning that instead of doing a full-on production of the play, all they did was put the orchestra on stage with actors who’d spent nine days rehearsing and had just enough blocking to sketch out the scenes — while carrying scripts!  Quelle horreur.  Maybe if I’d known ahead of time that they weren’t going to be off-book, I wouldn’t have minded so much.  But it surprised me, and I spent the whole time feeling distracted by the fact that the leads were declaring undying love with their nose in a stack of papers.  Then when they tossed their scripts (which were looseleaf) in the air during a moment of passion, all I could think about was HOW ARE YOU GOING TO FIND YOUR PLACE AGAIN WHEN YOU FORGET YOUR LINE?  Very stressful.

I’ve never yet walked out on a live performance.  Other members of the audience weren’t so patient.  Part of me wished I’d gone with them.

Dinner beforehand, however, was lovely.  I finished work around 6:00pm with plenty of time before the 8:00pm curtain, so I headed over to the newly opened Le Pain Quotidien down the street.  For those who aren’t familiar, this is a Belgian cafe chain that I came to love in Brussels (they had this thing called a “bombe au chocolat” that was awesome) and which has since crossed the pond.  They started opening cafes in New York while I was there for law school, and now they’ve made it to DC.  I settled in with my new biography of Catherine de Medici (who, by the way, is fascinating) and had a wonderful dinner until it was time to walk over to the theater.

← Boise – Raclette Party
Have a heart! →
Follow A More Gentlemanlike Manner on WordPress.com