Happy birthday to Heather and me!  We’re officially 32 years old today.  A very grown-up sort of age to be, I think.  Heather’s off in the Caribbean celebrating her 10th anniversary with Jordan (she said she’d be snorkeling today).  I didn’t have anything special planned for myself but ended up celebrating with a most unexpectedly pleasant trip to New York.

Every year the Media Law Resource Center has a fancy dinner in New York in November, and this year the event was held yesterday.  The lawyers from the Post invited me to join their table, and my firm agreed to pay my train and hotel expenses.  I took the train up yesterday morning with the intention of working out of our New York office until the reception and dinner started in the evening.  It didn’t take long, however, for those plans to change.  The minute I walked out of the train station I realized that this was one of those rare days in New York when the weather is absolutely perfect.  The last thing I wanted to do was sit in an office!  So I dropped my things off at the hotel and began running through my list of things to do, calculating which projects could wait and which projects needed to be done today.  To my delight, the “must dos” amounted to a small handful of emails that could be quickly sent; everything else fell under the heading of “can wait” — which is exactly what it did.

So what did I do during my hour-and-a-half of playing hookie?  I jumped in a cab and sped off through the golden glory of autumnal Central Park to the Metropolitan Museum of Art. 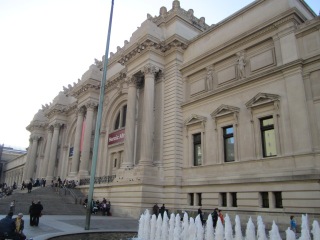 I just had to see the Met’s newly renovated Islamic wing.  I’d read reviews in the New York Times and the New Yorker (which also provides an audio slide show), and I knew I would be crazy to miss a chance to see the galleries.

Boy, was that the right decision!  Due to traffic on the way to the museum and my needing to be back for a meeting at 3:45pm, I ended up having only about 40 minutes to spend in the museum itself, but in that short time I saw some of the most beautiful works that I’ve seen in any museum.

For me, this first bowl was the clear stand-out of the collection.  It’s from 13th-century Iran, and something about the simplicity of the lines and the blurring focus of the circling fish struck me as absolutely perfect.  It seemed to pull me in and, for a second, the rest of the room hushed and fell away. 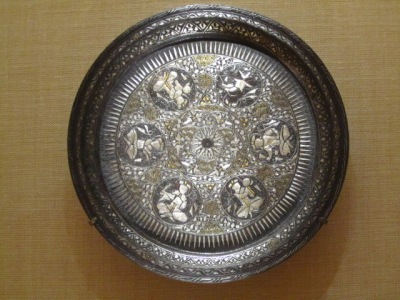 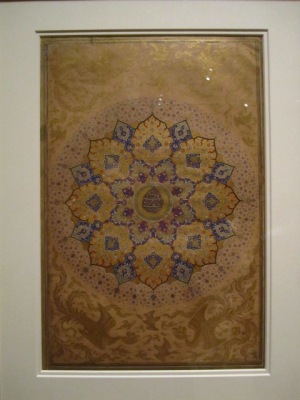 The article in the New Yorker explained how hairs from the bellies of squirrels were used to achieve some of the hyper-detailed miniature painting that was on display.  I’m not sure if squirrel-hair paintbrushes were used for this painting, but it is most exquisitely and minutely detailed — to the point of feeling infinte.  As if you could put it under a microscope and, no matter how many times you amplified the magnification, you’d never stop discovering more scroll-work and flowers.  (The close-up below is as close as my camera could get and retain focus, and yet even that is too “large scale” to capture the tiny-ness of the work.) 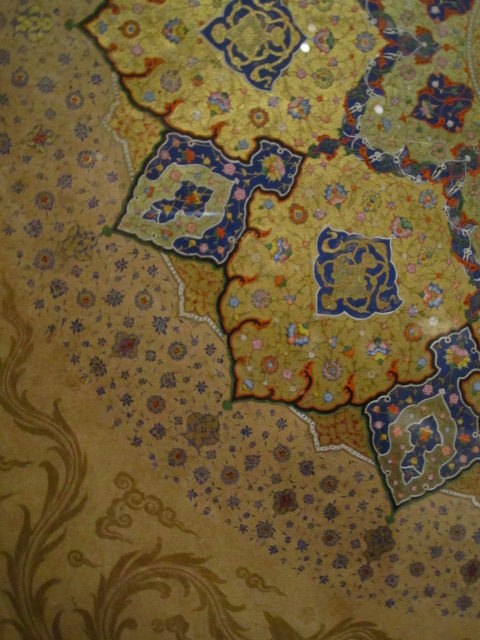 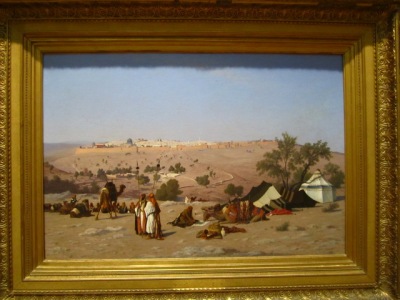 After soaking up as much as I could in the museum, I raced back to the hotel for a forum discussion about online piracy and a dinner, during which the main entertainment was an interview with Anthony Lewis (a prominent journalist and author) about the First Amendment, the Supreme Court, and the media in our society.