Nestled in the colonial heart of Arequipa is the Monasterio de Santa Catalina, a still-working convent that was founded in 1580 by a rich old widow.  It was a super-selective, prestigious convent where the upper crust sent their second daughters (or other daughters not destined for marriage) to become nuns.  Once inside, the women never left again for the rest of their lives.  They were supposed to be living an ascetic communal life, but since they were all super rich, and since many of them didn’t come there by choice, they lived quite a life of luxury for a long time:  they had separate houses, with servants and/or slaves; some even had pianos and washing machines.  All that came to an end in the mid-1800s, though, when the Pope decided to crack down and set them back on the straight and narrow.  Since then, they’ve opened most of the convent to a public; nowadays there are about 20 nuns, all of whom entered voluntarily and who are authorized to leave the convent from time to time with permission.

The complex itself was really lovely.  It looked like a fortress on the outside, but inside it was brightly colored (with original colors) and had a surprising Arabic flair.  Our guide explained that the Spaniards in the 1500s were still strongly influenced by Islamic architecture and aesthetics after the long Moorish presence in Spain. 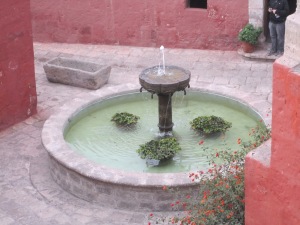 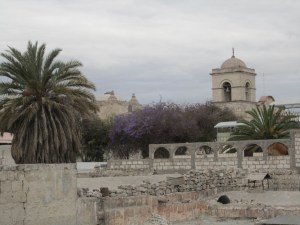