On Tuesday Amanda and I went out to Wolf Trap, an outdoor performing arts center outside of DC, for an Aretha Franklin concert.  We had gotten lawn tickets so that we could have a picnic (which Amanda expertly assembled) on the grass before the show. 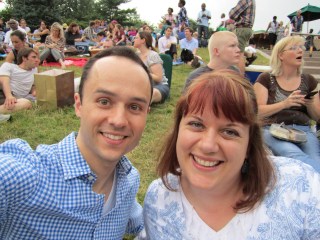 Unfortunately, as well-suited as lawn seating is for picnicking, it is not as well-suited for summer thunderstorms and showers.  Which we had.  Through most of the concert. 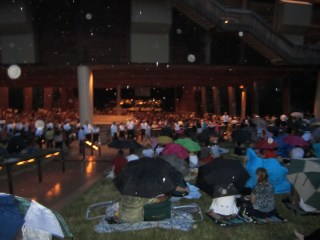 Not that rain could stop Aretha Franklin.  She’s kind of a force of nature.  I had seen her a few years ago when I was at the Kennedy Center — then I’d been backstage, with her bodyguards (each of whom were as big as four of me), her personal assistant (who looked like Tina Turner), and Aretha’s coat (a giant fur thing, which according to the scandalized Tina Turner I was NOT supposed to touch despite having been handed it by the Queen of Soul herself) — and I had been impressed by the way Aretha transformed from a heavy-set human woman off-stage into an electric presence onstage.  She may be nearly seventy, and her voice is pretty shot, but she’s still a star.

This time it was fun to see all of that from the audience’s perspective.  Of course, for most of the concert, I had to watch her through the narrow gap between two men’s heads, beneath their umbrella. 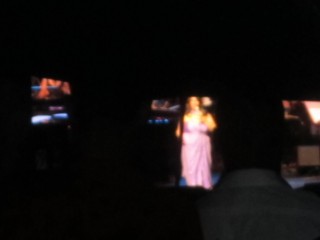 At least her purple dress matched the purple flash of the lightning overhead.