For some reason, it is impossible to fly from Columbus to Indianapolis without going through, say, Phoenix, which of course is absurd.  So, having finished my work at the Columbus station around 3pm yesterday, I packed up in my little red rented car and drove the 3 hours from one city to the other.  This is what it looked like (the whole way): 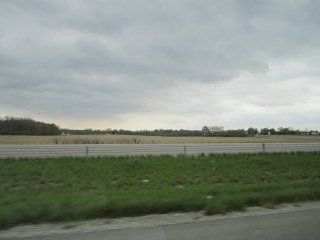 Très boring.  So I stopped off to get a bite to eat at Perkins and remind myself that just because someplace was a “nice restaurant” when you were 6, doesn’t mean that it actually is.  Fortunately, I had a waitress whose name was Barbie.  She didn’t quite live up to her namesake, but it wasn’t for want of trying (her makeup and hair were certainly ambitious).  I think the problem may have been the tattoos.

Eventually, I got to my destination and discovered, to my horror, that my firm’s travel agency had put me in a horrendous Hilton out in the middle of nowhere.  Literally.  I’ve been to Indianapolis before, so I kept expecting to find myself in its little cluster of downtown skyscrapers.  As I peered out my window, nary a skyscraper could I see (let alone the Eiffel Tower).  And the experience of staying there turned out to be as awful as the location augured:  The toilet had been used and not flushed before I arrived; the wallpaper was hanging on by shreds of scotch tape; I basically had to pull teeth in the restaurant to get any service, and even then it was exceedingly grumbly; there was hair in the fruit; and the place was entirely inhabited by middle-aged businessmen attending a conference and speaking loudly about watching American Idol.  More materially inconvenient, I discovered upon consulting the map that I would have to leave an hour earlier than I normally would so that I could finish crossing the plains (through morning rush hour traffic) to get to my early meetings on time.  It was a godmother moment.  My secretary and travel agent got a little note explaining, for future reference, that when I ask for a hotel downtown, I don’t mean a hotel in the neighboring county.  And, upon checking out, the front desk attendant somehow felt the urge to knock $100 off the room charge.

The day at the station itself went really well.  My meetings flowed nicely and the people were nice and helpful.  I actually ended up finishing everything I needed to do fairly early, so they took me to a nice lunch in a hip, artsy part of town, and then I spent an hour or so visiting the sights.  Here are the highlights:

After my brief tour, I sat in a cafe for a couple of hours to knock out some additional work before heading to the airport for a quick and uneventful flight home.